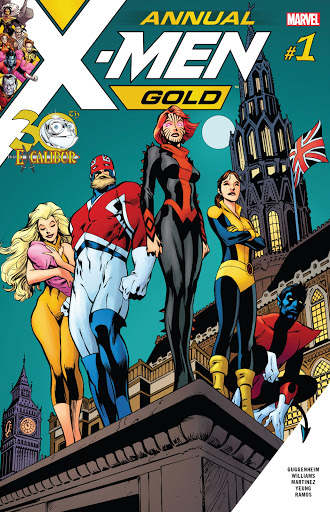 There’s nothing like a baby to get old friends together. News of a new addition to the UK superhero scene is delivered to New York-based X-Men leader Kitty Pryde in a decidedly unconventional - but rather wonderful - manner. 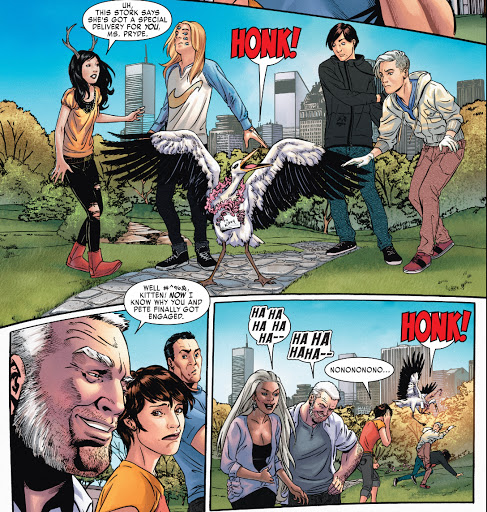 Soon she and former Excalibur pals Kurt and Rachel are making their way across the Atlantic for a reunion with Meggan and Brian Braddock, and a meeting with new baby Maggie. It turns out she’s even more precocious than a certain other cartoon Maggie. 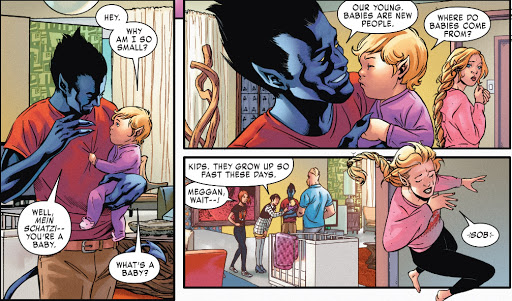 Meggan is perturbed by the development. Rachel and Kitty do their best to cheer her up. 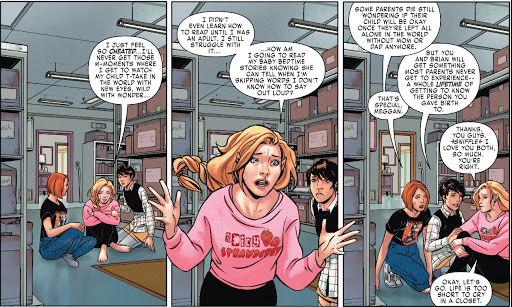 As it turns out, Maggie may be their best bet when trouble comes calling.

First off, I dislike the super-intelligent, talking-too-soon kiddie trope. I didn’t like it with Marvelman’s baby, Winter. I liked it less with Reed and Sue’s daughter, Valeria, who had all the arrogance of her father along with the super-arrogance of godfather Dr Doom.

I do, though, like the way writers Mark Guggenheim and Leah Williams have Meggan react, it rings so true. And Kitty and Rachel’s glass-half-full routine is the most unfortunate piece of superhero ‘there there’ since Beast koochie-koochied over Carol Danver’s newborn. At the very least Maggie is creepy as heck; hopefully a follow-up to this story will explain her development - surely it’s not just a mutant/fairy thing? Whatever the case, I say blast her with Reed Richards’ old lobotomising gizmo - she should be drooling, not patronising her parents

I like that despite it being a long time since they were in a team, the old Excalibur members are hugely comfortable in one another’s company. I say we make a reunion an annual event, and next time invite along Pete Wisdom, Colossus, Cerise, Widget... heck, anyone this side of Feron.

There’s no great tension in the fight with an old enemy out for revenge, but there is that old Excalibur whimsy, and I’m glad to see it again. The respect for character histories is also much appreciated. The only off-note is Meggan and Brian not having Kurt teleport out with Maggie once trouble arrives - she may think she’s 26, but she’s just beyond being a newborn.

The story is pencilled by Alitha E Martinez, who shares the inking with Craig Yeung and the result, as coloured by Jay David Ramos and Dono Sánchez-Almara, is really rather nice. The characters are pleasingly expressive and the page layouts serve the story. I especially like Kurt’s bamf effect.

But when did Brian become a hipster? He looks rather raffish but I’ve been with Brian Braddock since Captain Britain Weekly number one and never in a million years would he be such a shameless trendbag. And while he looks pretty darn handsome in civvies, once the mask is on he looks ridiculous. 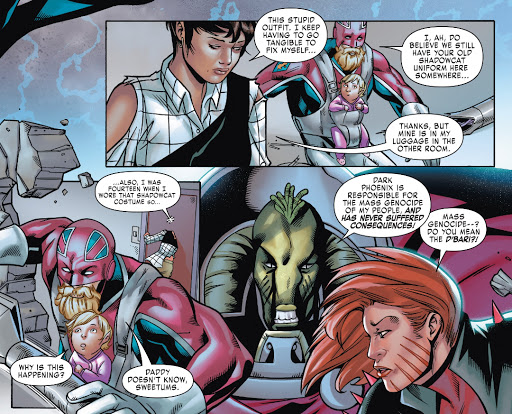 There’s a second story, one of those shorts that lets us see the X-Men through the eyes of ordinary folk, fans and haters alike. 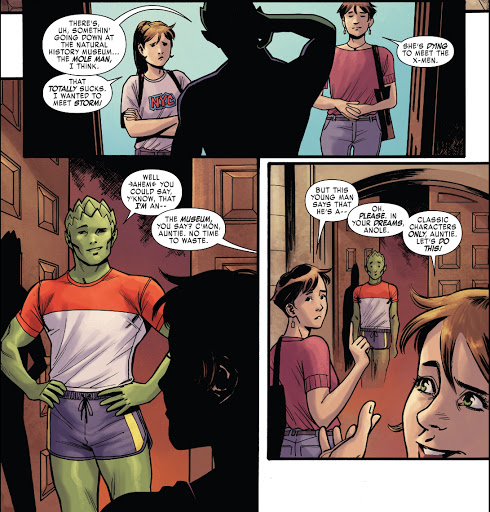 It’s a fun, sweet, touching piece by (the surely pseudonymous) writer Monty Nero, artist Djibril Morissette-Phan and colourist Michael Garland, but I wish it was appearing somewhere else and the extra pages had gone to the Excalibur reunion.

Oh, and we get a superb homage cover - that’s proving a bit of a thing this week - by classic creator Alan Davis to his Excalibur #1 image. Inked by Mark Farmer and coloured by Chris Sotomayor, it’s a real treat.

All in all, X-Men Gold Annual #1 - aka The Cross-Atlantic Caper, a nod to a fan-favourite story - is a delightful read for the team’s 30th anniversary. In the (almost) words of Father Ted, More of This Kind of Thing, please, Marvel.