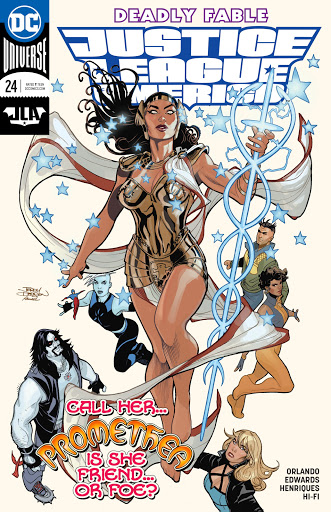 There was, as we say in Scotland, a bit of a stooshie when word got out about this issue. How dare DC Comics use Promethea, the character created by Alan Moore and JH Williams for the ABC Comics line? The arguments on that one have been well-rehearsed elsewhere, so let’s just look at how she’s used in the comic.

The Justice League of America, minus one, are fighting Tsaritsa, the lunatic Queen of Fables, who has been persuading people to let her grant their wishes. This in turn gives her the power to open a doorway to the Immateria, the realm of imagination. But this other world has a guardian... Promethea. 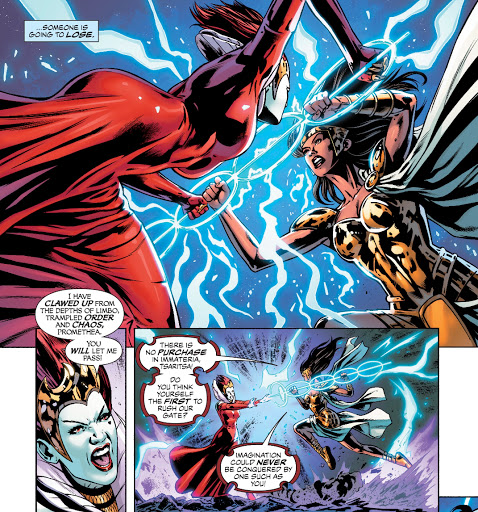 As noble warrior battles killer queen, that minus one I mentioned is struggling with her decisions. League member Frost was promised a cure for her unique medical problem - she needs to absorb heat from humans to survive, but doing so can kill her victim - in return for taking the place of Tsaritsa’s lost sister, Freya the Snow Queen. It’s not an entirely selfish decision, Frost believes she can reign in the Queen, so saving her friends and the wider world. Not everyone is convinced. 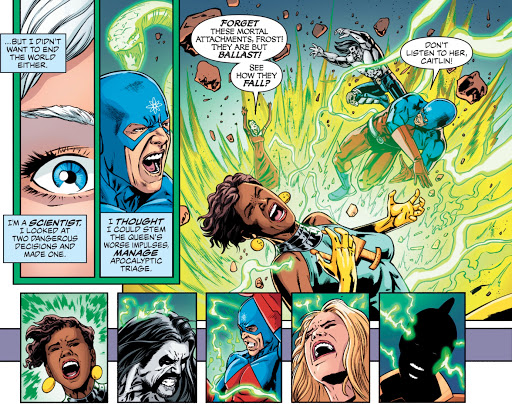 This issue winds up the Deadly Fable storyline, and Promethea is a big part of the conclusion. It’s years since I read her book, getting more bored by the issue as the series transformed from adventure comic to roleplaying system, but she seems pretty much as I remember her - powerful, compassionate, but ultimately unknowable. Writer Steve Orlando seems perfectly respectful of the earlier work, using Promethea in a way that gels nicely with the Queen of Fables’ long-established backstory. He doesn’t have her join the League; she’s here, she helps resolve the situation, but doesn’t trample over the stars of the comic - the League is vital to the resolution. And then Promethea is gone.

This series has been more about characterisation than action, with the latter inextricably linked to the former, and that continues here. Frost, the Atom and, especially, Vixen are key to the victory, and even Lobo gets a great moment, as Black Canary entirely misses his irony. 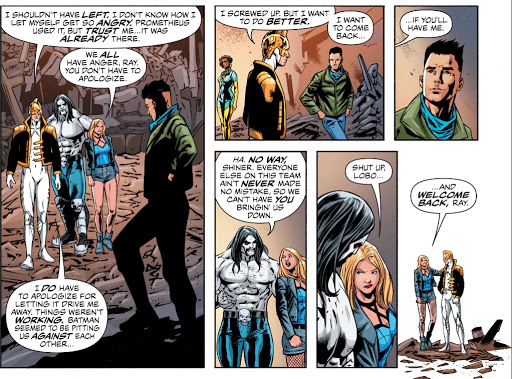 One detail I appreciate is a dialogue nugget relating the Immateria to DC’s other realm of Story, The Dreaming.

Penciller Neil Edwards really shines. Wisely, he makes no attempt to replicate the ornate spreads Williams used on Promethea, that really would open him up to complaints from the ‘Alan Moore’s work can’t be touched’ brigade. And it would be wrong, as this isn’t a Promethea book, it’s the JLA with a very unexpected cameo. So Edwards concentrates on solidly stylish superhero stripwork, impressing by unleashing his own talent rather than aping someone else. He’s aided by the super-sharp inks of Daniel Henriques and Andy Owens, and blazing colours of Hi-Fi. Clayton Cowles’ lettering is excellent as ever, I especially like the Queen’s fantasy font, and the use of Promethea’s trademark word balloon shapes. 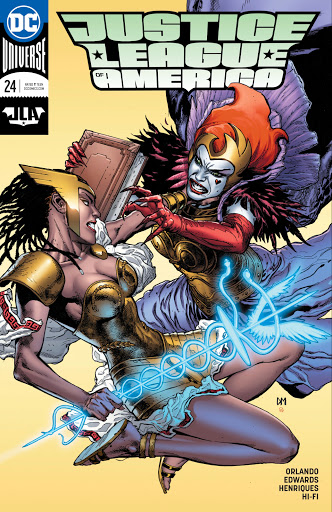 We get not one, but two, rather lovely covers. The variant by artist Doug Mahnke and colourist Wil Quintana is a nicely composed battle image, while the main cover by penciller Terry and inker/colourist Rachel Dodson is simply stunning... if only a few of Promethea’s stars would stick around and plant themselves by the logo, in true JLA tradition... And I like that the team’s tech man, Xenos, is considered enough of a Leaguer to make the image.

All in all, this is a fine ending to a very interesting story. It looks like this series is ending soon, as Scott Snyder takes control of the JLA franchise, and I’m already mourning it. Promethea herself would smile at the imagination and art of this comic.