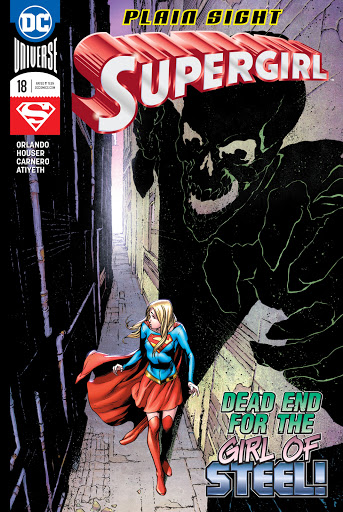 It's Kara Danvers' first prom but it could be the last dance for Supergirl. The extraterrestrial Evolutionist has interrupted the school party and is calling out the Girl of Steel. While Kara slips off to change into her Kryptonian uniform, her friend Ben Rubel steps up. 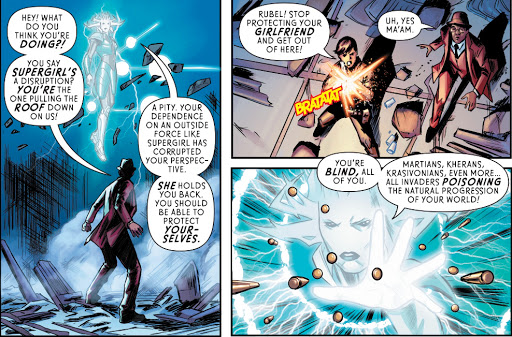 DEO Agent Ocampo - stationed at the school with orders to learn Supergirl's secret ID - advises Ben to stop being so brave and concentrate on not getting killed. That's when Kara enters the fray, and learns what this new adversary is all about. 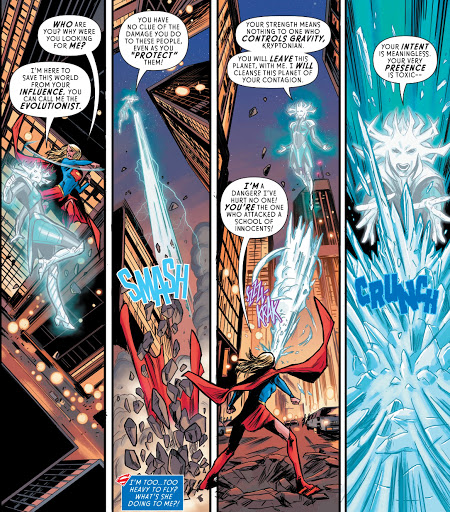 She shares her backstory - alien missionaries infected her people, presaging the end of a civilisation. She turned an escape rocket into gravity-negating armour, and devotes herself to stopping well-meaning aliens messing with other worlds. Which is, actually, precisely what she herself is doing right about now.

Kara's too busy defending herself to assail the alien oddball with logic, using a rather cool move to turn the tide. The Evolutionist's telepathy allows Kara to share her own memories, showing just how wrong she is about Supergirl, shocking the being into retreat.

There's no thanks for Supergirl from Ocampo, who parrots the usual DEO orders to give herself up. But Kara isn’t going to give in. And she’s done with fleeing the scene after saving the day. 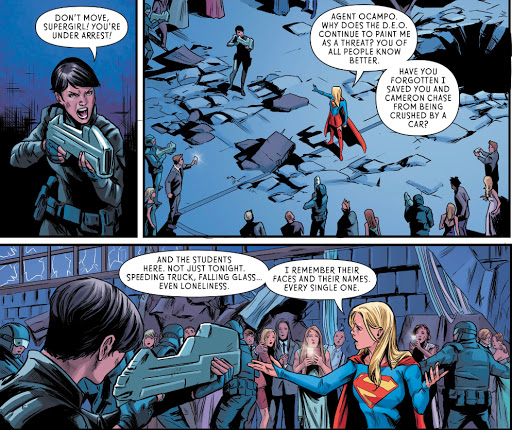 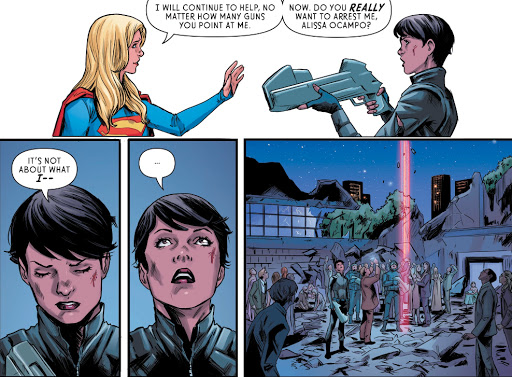 Ocampo stands down, Supergirl flies away to reappear as Kara, and Ben offers her a lift home. And they share a moment. 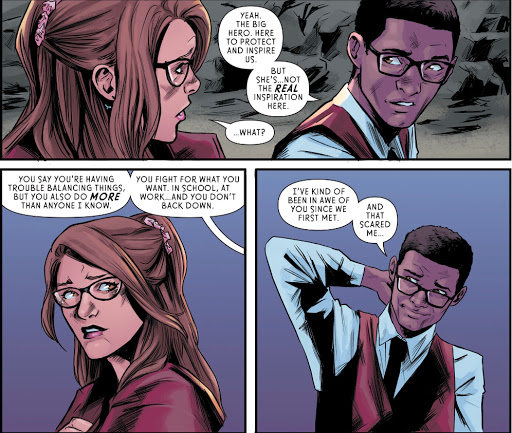 Then a dance. And a kiss.

Things are certainly looking up for the Girl of Steel, but the close of the book shows another member of the cast having a seriously bad day...

This is a lovely issue. Once again Kara is a shining example of heroism, slow to anger, quick to seek understanding. She uses her powers with real skill. She makes the Evolutionist think again, then confronts Ocampo with the nonsense of her assignment. As Kara she finally opens up a little to Ben. And there's a fine bit of secret identity business as she wakes up on the beach, before Ben, after what I presume was an innocent snooze together.

The issue isn't without its headscratching aspects though. The Evolutionist follows quickly on the heels of Deceilia as an alien menace who reckons her tragic backstory gives her the right to attack anyone she wishes. The Evolutionist's targeting of Supergirl is more personal, mind, begging the question: why? She's come to a world which is also home to Superman, J'onn J'onzz, the Hawks... why is Supergirl so annoying to her? And what's her motivation, stopping people getting alien germs, or preventing aliens from interfering; her past points to the former being the problem, but her words to Supergirl are all about the latter.

The fact that she first appeared last issue in an end sequence drawn by a different artist to the one who handled the bulk of the book has me wondering if a planned storyline for this issue was dumped, and the Evolutionist slipped in - not so late that she didn’t make the solicitations a few months back, but late enough that she’s not as differentiated from Deceilia as writers Steve Orlando and Jody Houser might have made her. She’s just another judgemental, angry alien lady. Certainly my nose twitches at the fact she doesn’t appear on the excellent cover by regular penciller Robson Rocha, inker Daniel Henriques and colourist Michael Atiyeh.

Talking of suspicions, I’m tickled that Ocampo is convinced Kara's classmate Belinda Zee is Supergirl, that takes me right back to the early Seventies when, if memory serves, Linda Danvers' boss Geoff Anderson suspected Supergirl was frenemy Nasthalthia Luthor.

Rocha is absent this issue but Carmen Carnero keep things looking extremely spiffy with her great-looking, dynamic work. Every page is terrific, but my favourite sequence is her and Atiyeh’s execution of Orlando and Houser’s tribute to the classic phone booth change.

She also treats us to some excellent facial expressions and body language, especially as regards Ocampo. And whatever the Evolutionist is doing here, Carnero and Atiyeh make her look fantastic - ethereal, slightly whimsical, yet menacing. I hope DC gives Carnero a regular book.

While Carnero would likely do a fine job with wordless sequences, without words there ain’t no comic, and Houser and Orlando give us a splendid script, well paced with a smart balance between character and action. And it’s all lettered by the excellent Steve Wands, adding another layer of style and craft to the book

There’s a variant cover, by Stanley ‘Artgerm’ Lau, and it’s another stunner, showing Supergirl in my favourite costume, and set about a second after the first issue of her Eighties book. And while that logo was never a favourite, seeing it again has me warm and fuzzy. 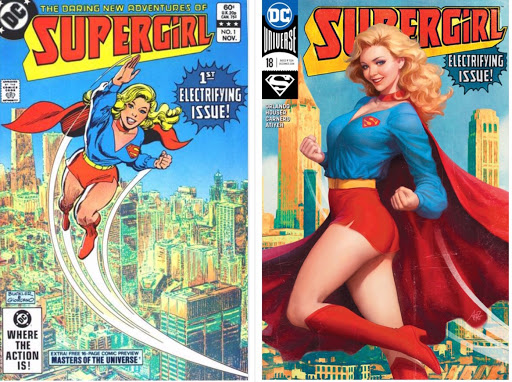 A year and a half in, this Supergirl series has found its feet, with Kara’s perspective on superheroism - open hand first, closed fist if necessary, friendship and rehabilitation if possible - rather unique in the DCU. I dearly hope this book doesn’t fall victim to whatever incoming Superman writer Brian Bendis plans...