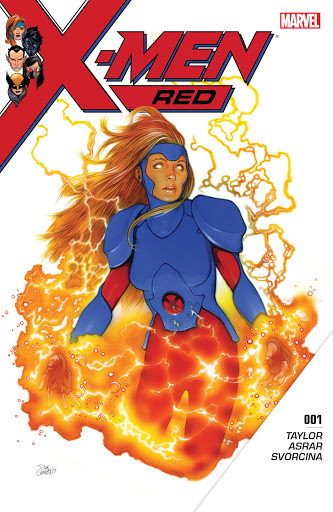 A young girl flees a braying mob, warned of their imminent arrival by a voice in her head. They’re right behind her, but help shows up. 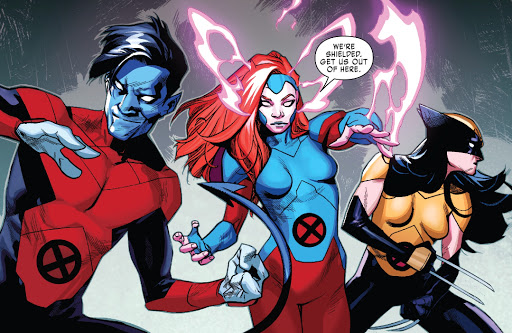 It’s a group of X-Men, led by Jean Grey, telepath and telekinetic. She’s here to offer a new life to the girl as her old one is ripped away.

Flashback two months and we see another mutant rescued - a very new mutant. 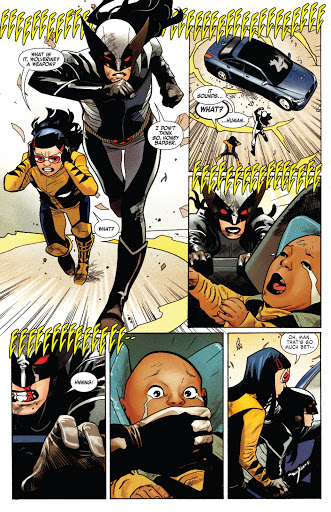 Baby Toby is too young to be offered sanctuary at the Xavier Institute, but he does get Jean thinking about how to make a better world. One in which mutants aren’t hated and feared. And as that means talking to the UN, she begins by getting support from two of Marvel’s best-known leaders, Black Panther - who was, of course, married to Storm for a couple of minutes - and Marvel’s original-if-after-the-fact mutant, Namor, in sexy mode. 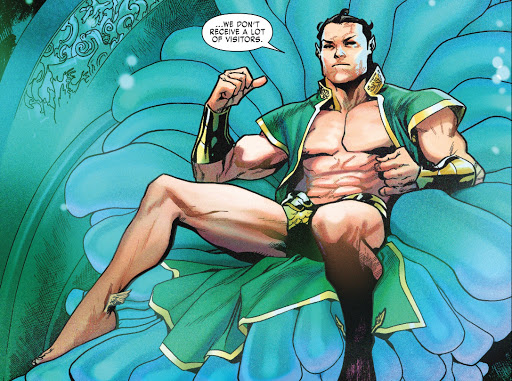 This isn’t the most exciting beginning to a new X-Men team series. Things get pretty interesting at the very end, but before that, well, half the book is devoted to the two rescues. And while we might expect at least one action scene in an X-Men book to involve super-villains, here it’s just a 2017 version of villagers with pitchforks, and a couple of useless carjackers. One such sequence would easily have done, to show why the world still needs X-Men. That would have allowed room to introduce Jean’s teammates. Yes, they’re named, but they’re not introduced. Apparently Trinary is new, but the rest all have some Marvel history, from Namor’s eight decades to, well, I dunno... Gentle? Honey Badger? Surely only X-Men completists would know all the ‘established’ characters. We learn why Namor and Nightcrawler are there, but as for the rest... Why has Jean assembled this group? What’s their unique selling point?

I do like Jean as presented here, as an activist, but not an impulsive one; she thinks, she works up a plan. The friendship between Jean and Nightcrawler is tangible. The name of the team HQ is a pun of genius/lunacy. And there are a couple of great nuggets of dialogue, such as this. 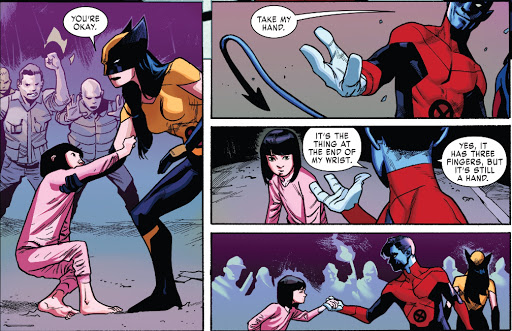 I’ll probably give this another issue or two, as I enjoyed Taylor’s work on DC’s Earth 2 book, and hear good things about Injustice and All-New Wolverine, but if I were making a decision simply on the basis of this first issue, I’d be out. I do hope it’s not all going to be about mutants striving for acceptability, it’s been done to death. And resurrection. And death again.

The illustrations by Supergirl alumnus Mahmud Asrar are attractive, nicely conceived and laid out. His Jean is especially strong, she has that likeable girl-next-door quality Marvel Girl had before she went cosmic. There’s a page involving bamfing and a shark that could be clearer, but overall, I like the art, especially as coloured by Ive Svorcina - it’s bright, but not brash. The letters are by Cory Petit, so are pretty darn good.

This book credits three graphic designers, which seems a bit excessive... likely they’re responsible for yet another of those two-page credits spreads Marvel uses as filler in lieu of paying creators. A waste of their space and my money.

The cover, by Travis Charest, is fine, Jean looks good in a sedated way, but the image should be a variant - a team book needs a team shot.

Overall, I’m underwhelmed. I’ll be back for #2, but if it doesn’t dazzle me, I’ll wait for X-Men Red to show up in Marvel Unlimited.