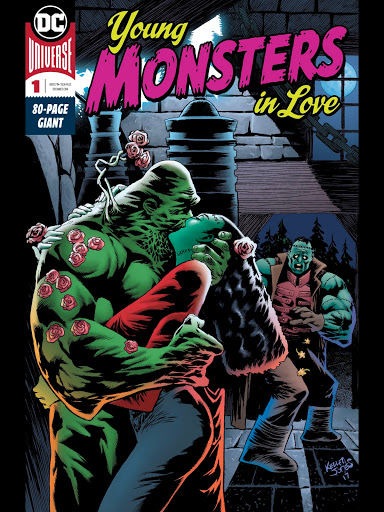 It’s almost Valentine’s Day, when a young man’s heart turns to... horror. Well, that’s the idea behind this 80pp giant from DC Comics, as a mass of monstrous folk wrestle with their softer sides. 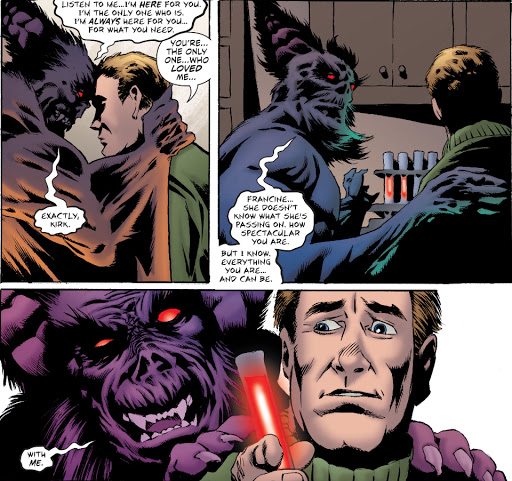 We begin with Man-Bat, longtime friendly foe of the Batman. Kirk Langstrom is keeping his alter ego at bay, but the crazed creature is never far from the surface, making a coffee date with estranged wife Francine rather complicated. Artist Kelley Jones makes Kirk’s inner turmoil manifest in striking style, while writer Kyle Higgins ensures we have empathy for the stricken scientist as his two loves fight for dominance. And applause to colourist Michelle Madsen for making that bat serum glow so. Nocturnal Animal is a gem. 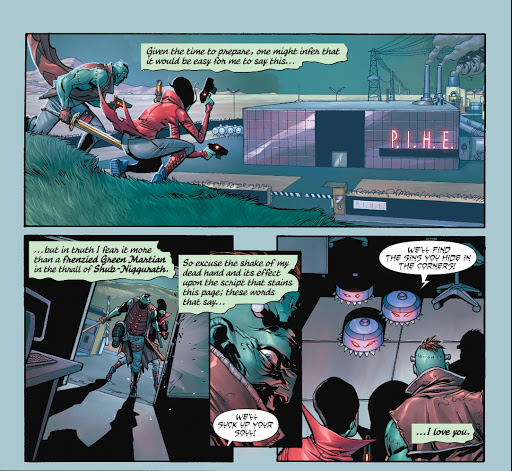 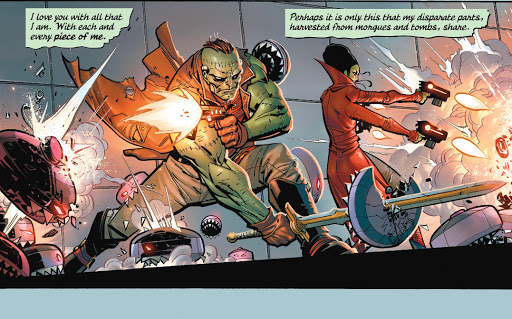 Frankenstein, Agent of S,H.A.D.E. returns in the terrifically titled Pieces of Me. Our hero is fine with running headlong into a typically weird mission for the creepy Father Time, but having trouble working up the courage to deliver a letter to his love, The Bride. So far, it’s 200 years late... Courtesy of Tim Seeley, ultimate bit part player Frankenstein has the heart of a poet - were the Bride to read his words it’s very possible she’d overlook the fact he killed their son (hey, these things happen). As it is, she’s having a ball shooting up possessed robots. Kudos to Seeley for a hugely enjoyable tale - I especially enjoyed the cameo from one of DC’s old horror hosts. Penciller Giuseppe Camuncole and inker Cam Smith draw up a storm, while colourist Tomeu Morey adds extra layers of delight. Letterer Clayton Cowles deserves an extra bouquet of roses for his splendid choice of fonts. A melancholic masterpiece. 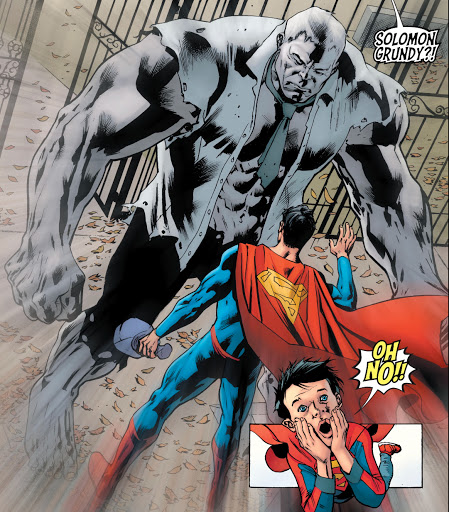 To Metropolis, where Solomon Grundy is Buried on Sunday. He started out as an antagonist of the Golden Age Green Lantern, but Superman has fought the hulking revenant a fair few times and understands that Grundy isn’t your average monster. Lois is apprehensive about Clark seeking out Grundy, while Super Son Jon assumes there’s a rampage to be stopped. We learn what Superman is up to in a very nicely written story by Mairghread Scott, which features crisp, attractive art by penciller Brian Hitch, inker Andrew Currie and colourist Nathan Fairbairn. They do especially great work on the latest Superboy. I wish Grundy looked more like the classic - Hitch and co make him almost attractive - but this is a fine short, making the monster a little more sympathetic while showcasing Superman’s compassion.

Teen Titan Raven turns psychic investigator in The Dead Can Dance. She doesn’t know if a ghost needs help but she does know that a little girl shouldn’t be afraid in her own home. Her demonic abilities allow Raven to connect with the spirit and she ends up with an unexpected gift. The tender tale is delivered by Collin Kelly and Jackson Lanzing, who give Raven bags of personality, while the moody art comes courtesy of illustrator Javier Fernandez and colourist Trish Mulvihill. 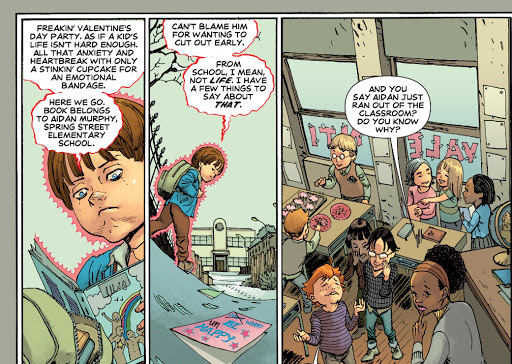 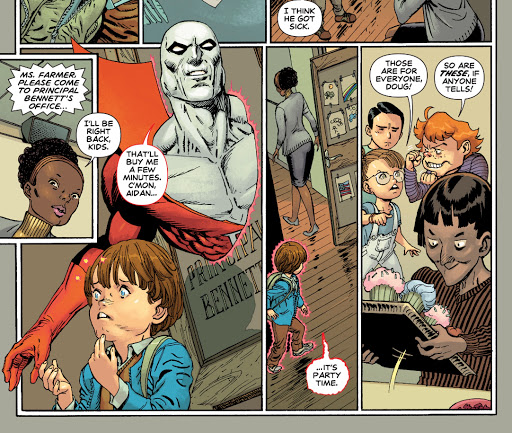 Deadman comes to the aid of a bullied boy in Be My Valentine, a total treat which sees sentimental seasonal cards transformed into deliberate deliverers of pain. Boston Brand brings the acrobatic skills he used in life, along with the compassion he’s developed in death, to bear on the matter. Writer Paul Dini needs to be given a Deadman series at once, and if artist Guillem March and colourist Dave McCaig could bring their dynamic visuals, so much the better. 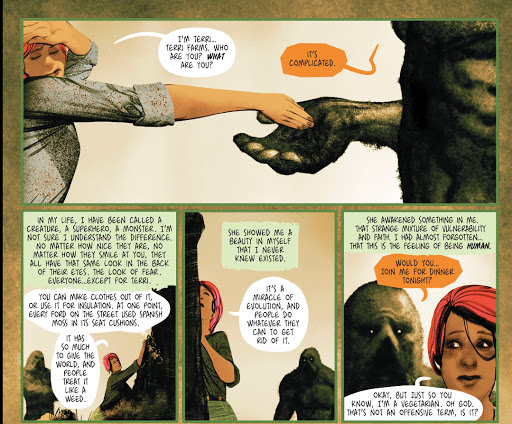 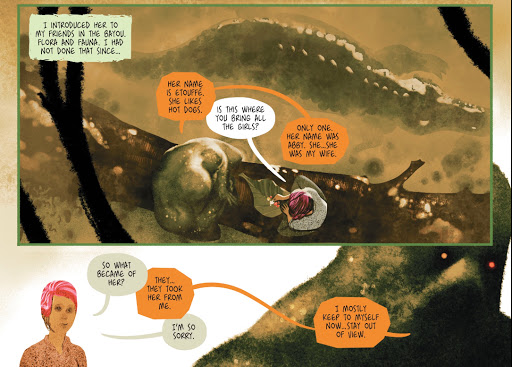 Swamp Thing stars in the issue’s only depressing story, Heart-Shaped Box, as he shows a terrible tendency to wallow in angst. OK, so his bizarre romance with the tweely named Terri Farms doesn’t work out, but he immediately makes it all about his pain, his misery. The entry is written with precision by Mark Russell, and Frazer Irving’s art burns with bioluminescence, but boy, is Swampy a downer. Then again, not every Valentine’s Day is full of joy. 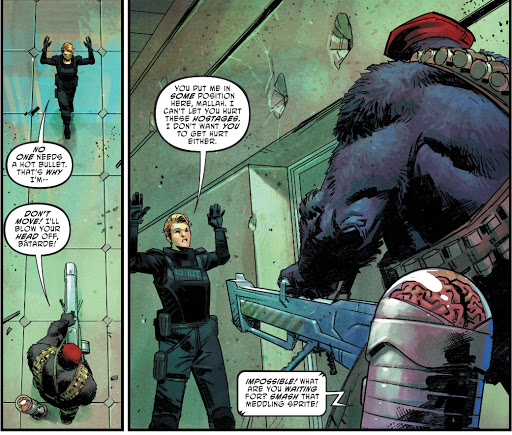 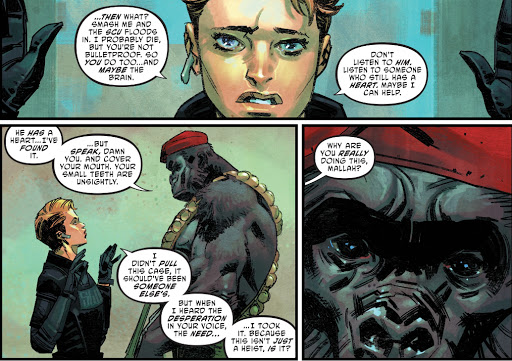 Happier times return with Visibility, starring vintage Doom Patrol baddies Monsieur Mallah and the Brain. Can Metropolis cop Maggie Sawyer talk the partners in crime down when they take hostages at a Lexcorp plant? Steve Orlando’s interpretation of the gun-toting gorilla and the pickled mind is spot-on, with the animal far more human than the man. Nic Klein’s full-colour illustrations bring everything to intense life, with his depiction of Mallah’s intelligent eyes especially vibrant. A glorious final page bumps this into favourite story spot. 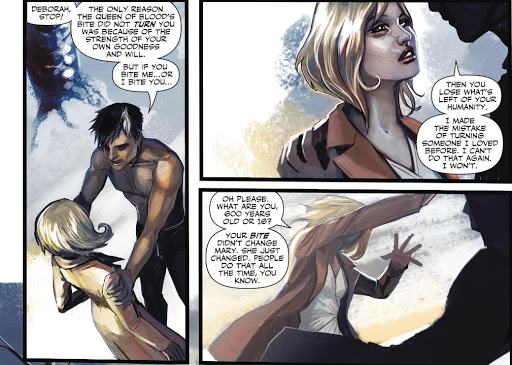 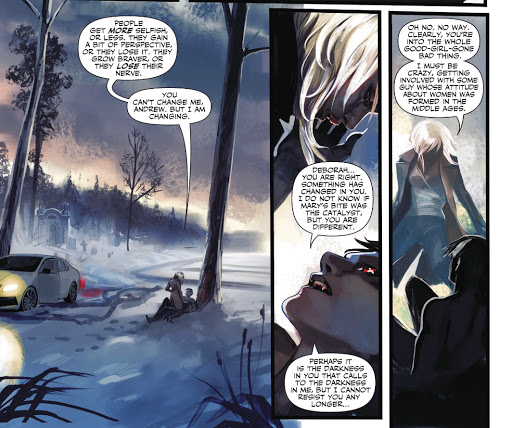 Romance was always at the heart of the original I...Vampire strip, making it perfect for the Valentine’s treatment. Writer Alisa Kwitney resurrects benevolent bloodsucker Andrew Bennett in fine style but it’s longtime associate Deborah Dancer who steals the show as they go demon hunting in Prague. The highlight is Deborah’s speech about change, something far more insightful than we’re used to in a funnybook. The Haunting of Deborah Dancer proves to be a benevolent affair, one beautifully presented in colour by artist Stephanie Hans - even something as banal as a Puffa jacket looks brilliant. 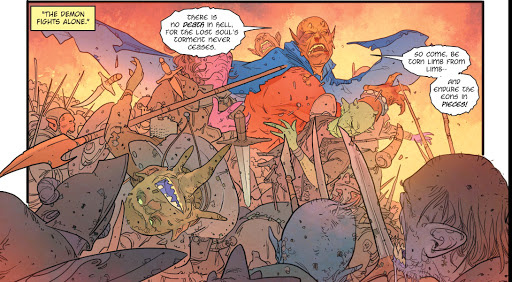 Writer Phil Hester adds to DC’s ever ornate imagining of the Afterlife in his Demon story, To Hell and Gone, via a Hell-Lord’s rather grisly pre-battle routine. As always, Etrigan is on the rampage, and while his rhyming is more painful than his claws, there’s a vein of spite that suits Jack Kirby’s creation down to the unhallowed ground. This is my first look at the art of Mirko Colak and I’d like to see more; when he's drawing Hell, there’s a Scott Kolins quality that works with this story. And back on the earthly plane. Colak shows quite the talent for drawing clothes, a rare and under-appreciated gift. The flaming colours of Mike Spicer are also a big asset. 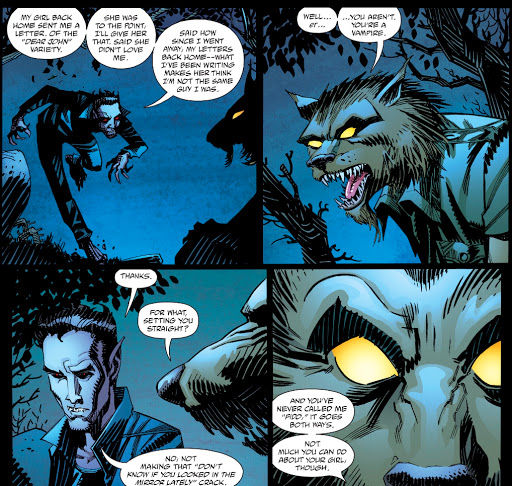 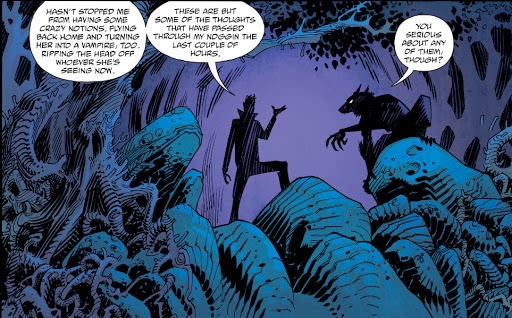 The Creature Commandos close the book with Dear Velcoro, and if you know Vincent Velcoro is the fearsome fighting unit’s resident vampire you won’t be surprised to learn this is a second story centred on a letter. But where Frankenstein’s missive might touch a heart, the one Velcoro receives only serves to break one. The meat of James Robinson’s short is a conversation between Velcoro and comrade Matthew Shrieve, a wolfman, and it’s a heartwarming one, ably drawn by John McCrea with striking colours by John Kalisz.

Topping off the issue is a darkly humorous cover by Kelley Jones starring Swampy, Frankenstein and his four-armed Bride - just gorgeous.

Anthologies are notoriously hit and miss affairs, with DC’s 80pp giants, more often than not, being miss and miss. Here, though, there’s not a stinker in the bunch... come the 14th I may just propose to editors Alex Antone and Dave Wielgosz. Now that’s a scary thought.