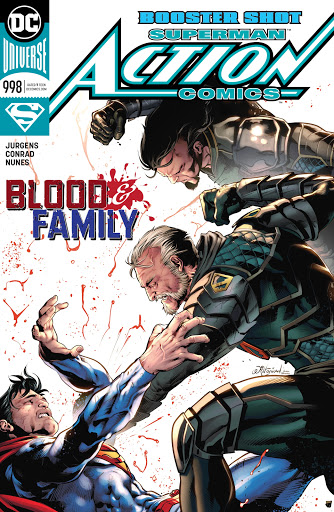 Superman and Booster Gold are in dire straits. They’re trapped in the future, bound before super-despot Zod and his equally warped wife and son on the world they call New Krypton. Booster’s robotic pal Skeets has been destroyed by Zod’s Eradicator henchman. There’s little hope of escape.

But Booster hasn’t given up hope. His force field won’t last much longer, but it’s not dead yet, and neither are they. Then, help from an unexpected quarter.

With the aid of the reborn Skeets, Booster and Superman turn the tables on the unholy family of Zod. And along the way, they point to new possibilities for the oppressed slave population of the world once known as Jekuul. 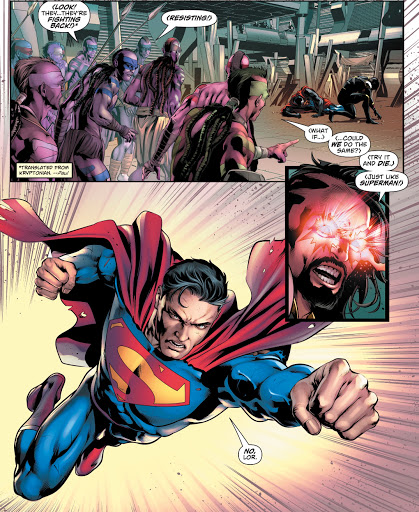 They aim to rip him in two, but it’s Booster who tears them apart, as a family, when he reveals what a truly vile specimen Lor-Zod is. 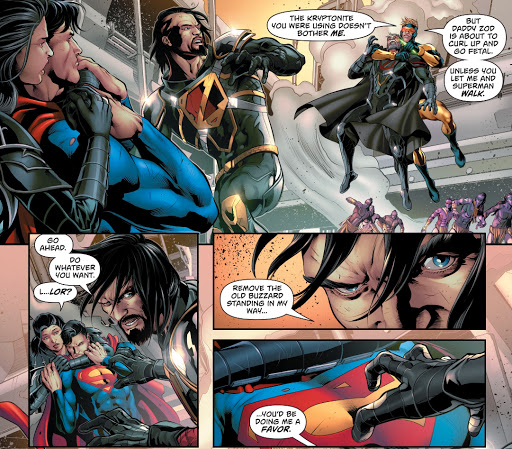 The three heroes escape, but the adventure isn’t over; Superman still wants to see if the great and terrible Mr Oz was telling the truth when he said Superman’s father, Jor-El, was saved from Krypton’s end by a blaze of blue light. On Superman’s word that he won’t risk the timestream by trying to save his birth parents, Booster agrees. Superman will see the last moments of his home world. 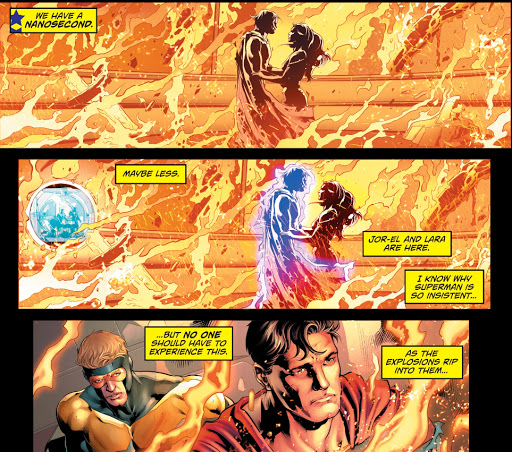 It looks like the villain was telling the truth, meaning he likely is a transformed Jor-El. Booster feels awful that Superman has seen his mother, Lara, reduced to atoms. And his empathy leads him to make a very dangerous decision as they head back to the 21st century...

The finale to Booster Shot nails the landing in fine style. It resolves the Planet Zod side story in satisfying style, showcases the power of Superman, smarts of Skeets and massive heart of Booster, and resolves the Lois in Logambo mini-story. Sadly, it also seems to confirm Mr Oz’s claim that he was once Jor-El, but heck, there’ll be a reality reset any minute.

Dan Jurgens created Booster Gold and it’s been terrific - sorry, Boosterrific - to see him writing the Justice Leaguer turned Time Master once more. Booster’s narration has lent a different perspective to proceedings while reminding old readers, and showing newer ones, what a great character he is. Booster’s good deed at the end of the issue could be a springboard for an upcoming appearance Jurgens has planned, or it could be something to be swept aside. I hope it’s the former and that Jurgens, when he leaves this book soon after an excellent run, will bring us the further adventures of Booster and Skeets in their own book.

Having popped up a couple of issues back, Will Conrad is illustrating once more, lending a slick, painterly look to proceedings. The pages sizzle with dynamism, the most immediately memorable being the Krypton scene, in which the awful grandeur of Krypton’s demise is matched to Superman’s horror and sadness, as an empathetic Booster stays in the background. Colourist Ivan Nunes adds real bite to the moments.

Oh, and there’s a fun in-joke for fans of DC’s big rival. 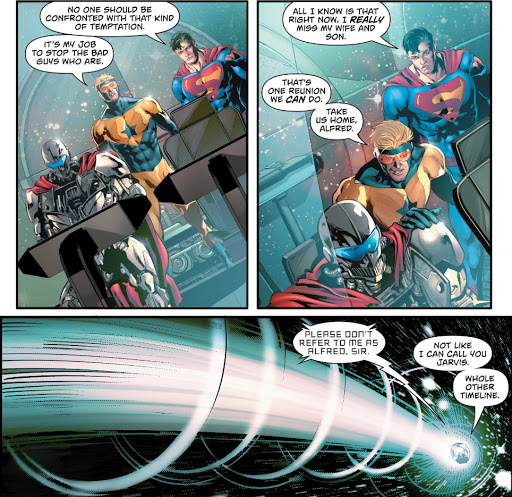 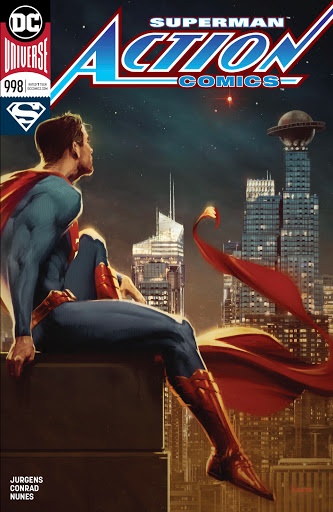 Booster Shot has been a great multi-parter and demonstrates once more what a massive loss to the Superman line Jurgens is. But if Superman’s loss is Booster’s gain, that’s a pretty massive consolation prize.