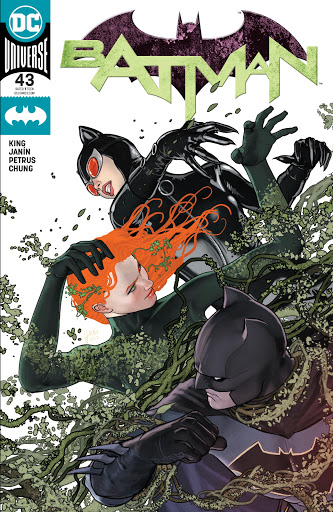 Batman is in hospital. He persuaded Poison Ivy to kill him with a single blow... the mistress of plants was possessing Superman at the time.

She’s still controlling him as this issue begins, along with pretty much anyone on the planet who’s recently eaten vegetables. That’s several billion people. Her concentration is, it’s fair to say, fractured as Batman, revived by the immense array of powers Ivy now controls, tries to talk her out of her plan to save the world by controlling the humans who are destroying it. 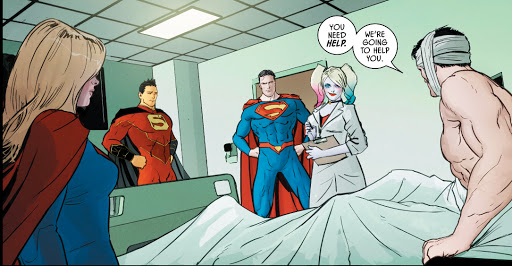 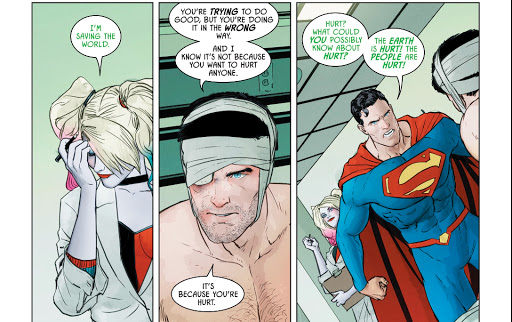 While his (latest) death was temporary, Batman retains a severe head injury - just as he planned. So why did Batman want a poorly heid? Because he knew Ivy would bring in Gotham’s foremost headshrinker. She was once in thrall to the Joker but these days Harley Quinn’s heart belongs to Ivy, and this relationship isn’t all one way.

Meanwhile Batman’s betrothed, Catwoman, is with the physical Poison Ivy, in Gotham Park, where she’s engaging in a bout of self-hatred. 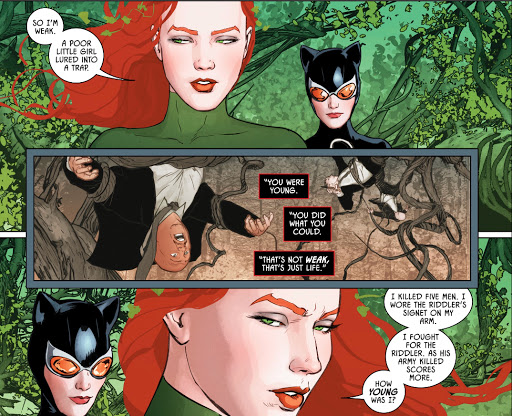 Together, Batman and Catwoman manage to usurp Ivy’s control of the world long enough that the Cranium-Crushed Crusader can escape his hospital guards, Supergirl, Superman and New Superman, with Harley in tow. 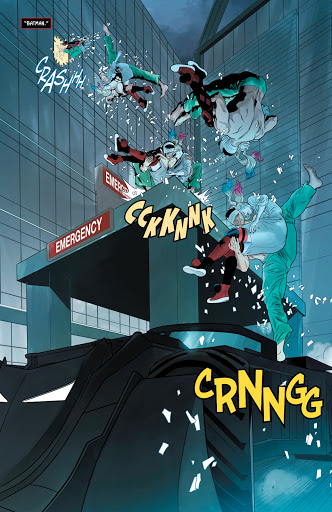 Blimey, now that’s a leap in the dark. A half-dead Batman smashing through an upper-storey window while carrying another person, and tumbling down to the roof of the Batmobile without killing either of them?

And then things get really bonkers, as Harley informs Ivy when the pair reach the park. 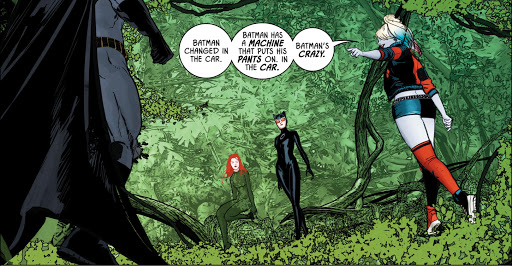 But can Batman, Harley and Selina snap Ivy out of her confused state, persuade her to let go of the world? Well, obviously, but the journey there is hugely entertaining.

I’ve not been a constant fan of Tom King’s Batman run; I liked the early issues, hated the characterisation of Bruce Wayne as suicidal that followed, and jumped off due to the violence of The War of Jokes and Riddles. But Romance brought me back last issue, and I’ve enjoyed the combination of nuttiness and warmth King has given us. This Bruce Wayne really is brilliantly batty, confident that Ivy can, and will, bring him back when she kills him (she’s apparently controlling a super-speed dentist too, given that the teeth knocked out last issue have re-sprouted). As well as the love match between Selina and Bruce (I cannot bear the ‘Cat’, ‘Bat’ bit, it’s too cutesy even for me, who worked with My Little Pony for years), there’s real tenderness in the way Harley and Ivy - or Pamela, as everyone strategically calls her - interact. Best of all is the compassion Batman shows for Ivy; I don’t believe it’s put on to get Ivy to release the world, it’s there already and proves a useful tool.

The art is split between Mikel Janín and Hugo Petrus, whose lightly photorealistic styles are similar enough here that the back and forth isn’t jarring. And colourist June Chung is the book’s not-so-secret weapon, her confident work ensuring the joins can’t be seen. Chung’s tones on the ladies, especially, are spectacular, while Gotham Park is a verdant vision - there’s an opening spread set there by Janín and Chung that is a masterpiece of panel-to-panel progression, within a single frame. And I love their Harley, who reminds me for all the world of Megan Mullally in Will & Grace mode... that’s the voice I heard throughout. There’s lovely lettering too, courtesy of Clayton Cowles, who gives us distinctive character fonts without going Dark Knights: Metal whacko. 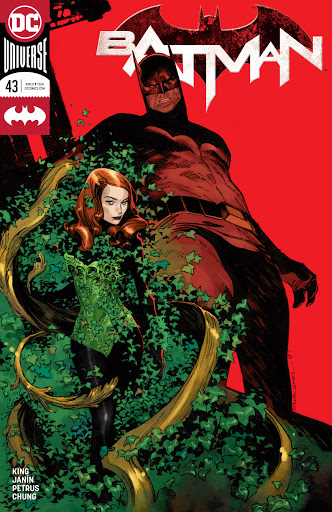 Janín’s cover is as pretty as heck - the characters finely balanced but the eyes are drawn to Ivy by that shock of hair. The variant by Olivier Coipel and Dave Stewart is decent, but somewhat pales in comparison.

The highly appropriate title of this short arc is Everybody Loves Ivy and it did rather have the feelgood factor. Now, bring on the wedding!