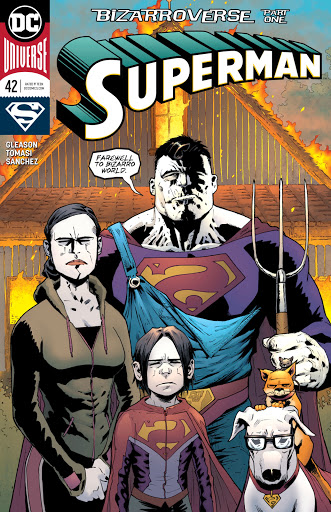 It’s morning on the Bizarro World of Htrae. Bizarro No 1 is thinking about his life as a family man. He’s not happy - whatever that means for an imperfect duplicate of the Man of Steel - as he feels he’s lost himself. It’s his son’s birthday, but today he resolves to focus on his own dreams. 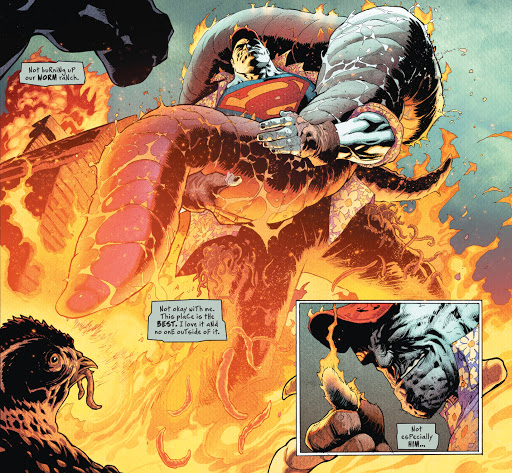 Later, Bizarranch is on fire, and No 1’s daring rescue of the livestock - er, yuk - prompts our first look at Jr. 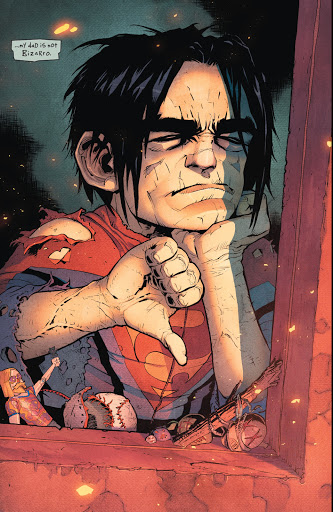 Not a happy bunny. He’s even less happy when Mom and Dad row. Something which seems to be a regular occurrence. Jr runs towards a field, where his pets are attacked by a hammer-carrying Bizarro Hawkwoman and her pet hawk. Jr is not in the mood. 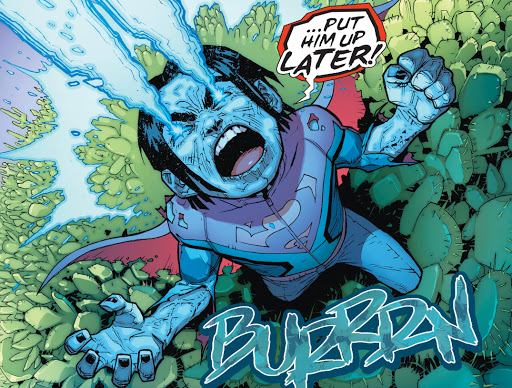 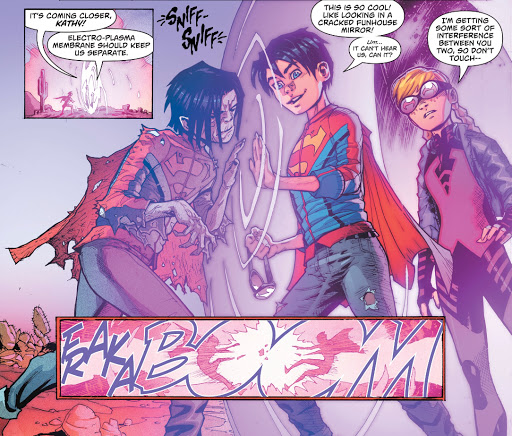 We travel back to Earth 0 with Jon Kent and Kathy Branden, the neighbour who turned out to be a girl from outer space. He’s visiting her back in his old home of Hamilton County and she’s been using some alien kit to give Jon a tour of other realms. Jon’s happy just to be away from Metropolis. 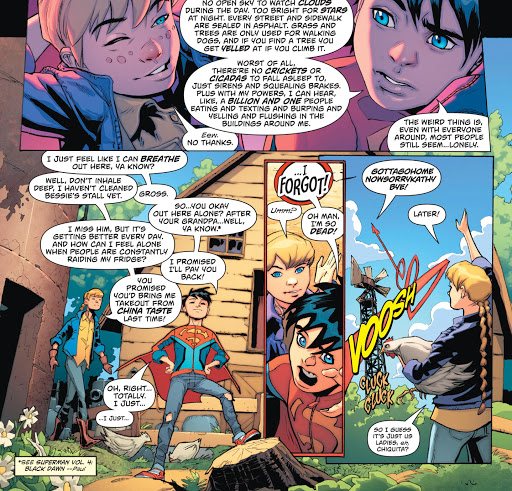 But all good things must end, and Jon’s due home to make supper for parents Lois and Clark. That means takeout from Jon, and teasing from his parents. 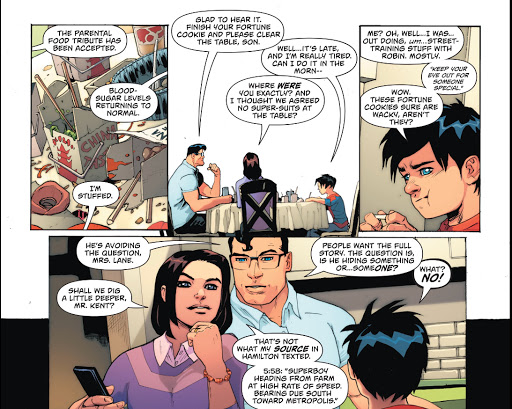 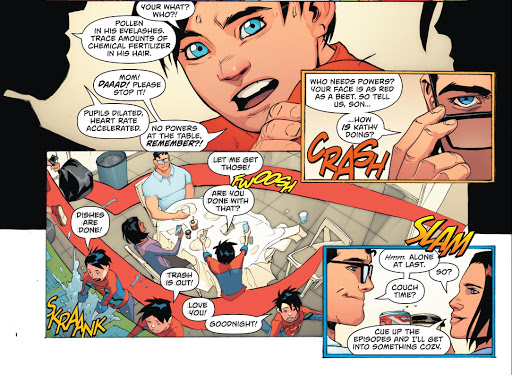 As for what happens after Jon turns in for the night... well, you can probably guess who shows up.

Just a couple more issues of the Gleason/Tomasi Superman run and - no attempts at Bizarro-speak because I wish to be clear - I could not be less happy. These past two years have been a delightful period for this old Superman fan, as the Man of Steel got to play family man courtesy of two creators who really know what that means. Just look at that supper scene, it sizzles like a screwball comedy, and it’s not just funny, it’s true. The family dynamics are exactly what they should be when you have two investigative reporters and one bashful tween. I wouldn’t be at all surprised were incoming writer Brian Michael Bendis to pin this scene to his desk as a quick guide to the Lane-Kents.

Equally impressive, in a different way, is how well the first half of the book works as a Bizarro version of this series’ first issue. From the artistic echoes by penciller Gleason, with the colours of Alejandro Sanchez distinctly darkening the original mood, to the inverted dialogue callbacks of Gleason and Tomasi, this kind of playfulness with form would elicit cries of ‘genius’ were Alan Moore’s byline on it. Anyone who’s been following the book worked out a long time ago that the Tomasi/Gleason team equals brilliance. And they make it look so easy.

It’s a real treat seeing Kathy again, introduced watching ‘Boyzarro’ just as we first met her spying on Jon. Now we know she’s one of the good guys, though seeing she and Jon leer at Jr like some kind of zoo animal is uncomfortable. Sure, this is Bizarro skewed towards the zombier end of the concept - not my favourite, truth be told - but he’s still a sentient being who deserves better. Who knows, by the end of this short arc things may be a tad brighter on Htrae - that kid needs friends and some wacky fun, because the presentation of him here is really rather upsetting. And while Bizarro-Lois’ treatment of her layabout hubby isn’t a million miles away from the way her Silver Age self acted, in today’s world, when we’re primed to spot abusive behaviour on either side of a relationship, it’s disturbing.

While Jr’s life is sad, Jon’s listing of reasons he misses Hamilton County is heartbreaking - if only Lois’ source had passed that onto her...

I love that where Jon, back in the debut issue, accidentally fried his cat, there’s every chance Jr’s pets are merely frozen temporarily. I refuse to believe anything else... surely Gleason and Tomasi wouldn’t traumatise me again? Speaking of cats, I adore this moment from the Bizarro version of #1’s This is Your Life montage. 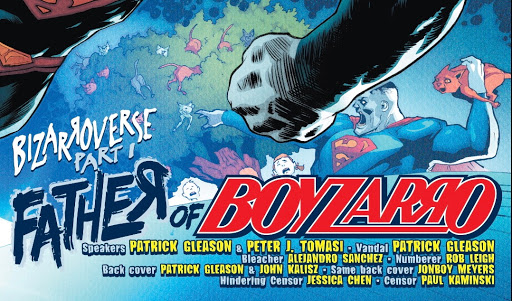 >Snicker< And check out those clever credits. I bet by now assistant editor Jessica Chen has a ‘Hindering Censor’ t-shirt. Regular letterer Rob Leigh is as on form as ever, giving No 1 and Jr suitably distinctive fonts.

Even the variant cover, by Jonboy Meyers, is a reverse of the first issue’s opening image by Gleason, inker Mick Gray and colourist John Kalisz. This time Gleason and Kalisz provide a Bizarro Gothic cover for the main run - bespectacled Krypto takes me right back to the Bronze Age. Two wonderful images. 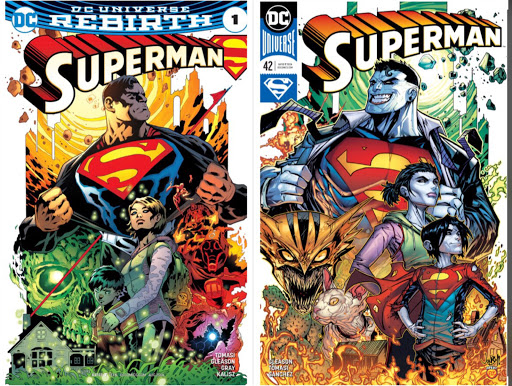 I’m dreading the end of this run, but on the other hand, roll on two weeks’ time for the continuation of this story. Too Bizarro?