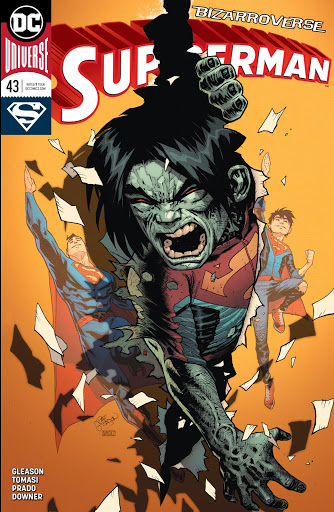 At her farm outside smalltown Hamilton, alien orphan Kathy - best pal of Jonathan Kent - is being watched. 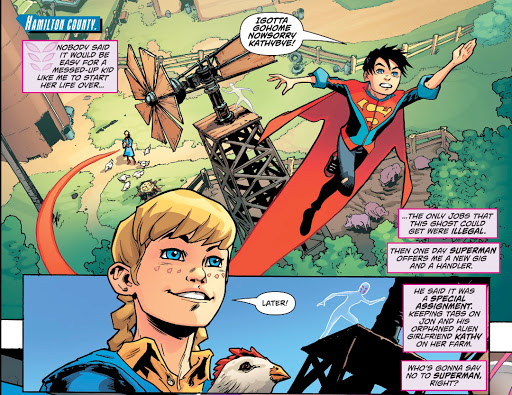 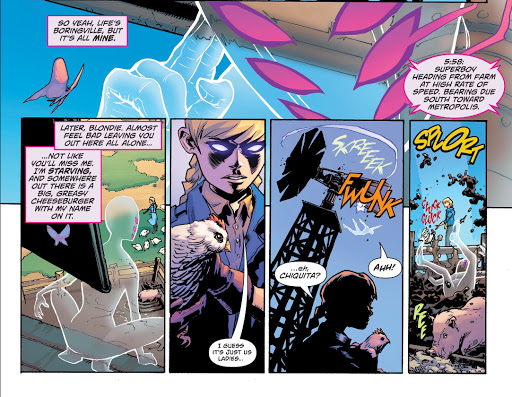 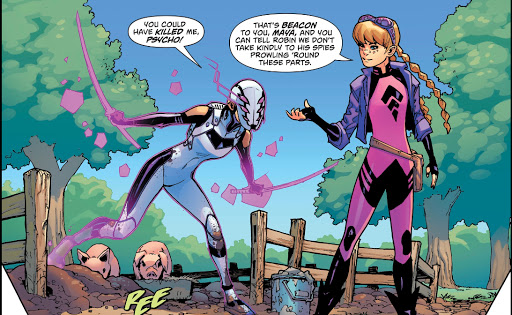 In Metropolis, a little later, Lois and Clark Kent are settling down for some TV. 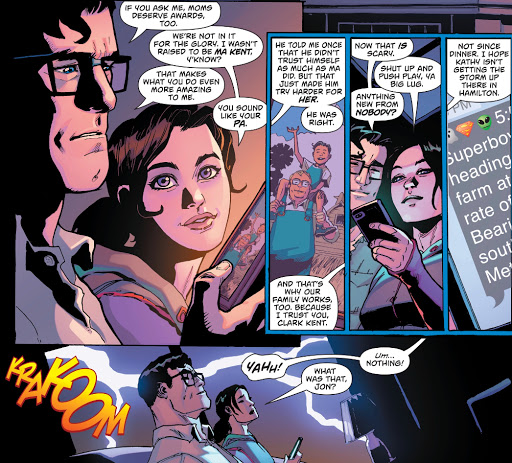 As for Jon, he has an unexpected visitor. 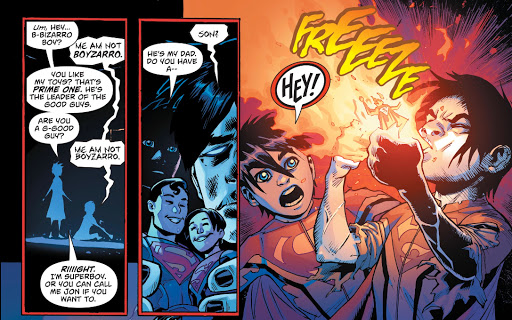 Boyzarro seems scary. Can the Boy of Steel calm him down long enough to find out what he’s doing away from his home Planet, Htrae?

Hey, big surprise, it’s a delightful issue of Superman from writers Patrick Gleason and Peter J Tomasi. Am so glad their creative control of this book am not ending.

Oops, sorry, brief moment of Bizarro-speak there. Well, attempted, anyway. Jon is much better at grasping Bizarro thinking than me, quickly making a connection with Boyzarro... he never does tell Jon his true name.

As for Kathy, seeing that Superman has someone watching over her was a nice surprise. To be honest, I’d forgotten about Damian Wayne’s adventurous pal Maya, aka Nobody. I’m rather pleased Superman has someone checking in on Kathy - even though she’s not of this world, and is surrounded by fellow alien immigrants, a kid shouldn’t be left to their own devices. And now that Nobody has been unveiled, Maya can continue her job, but as Kathy’s out-and-out pal.

As for Kathy, it’s interesting to see that she’s taken on a superhero name to go with the Power Pack-style outfit. Beacon, eh? She could pop over to Gotham and team up with the Signal!

The scene with Lois and Clark talking parenthood is my favourite in the book; this series has always focused on the family and the extreme close-ups are the highlights. The love, the respect... I really hope incoming writer Brian Bendis doesn’t blow it (it seems Gleason will teaming with him in some capacity over in Action Comics, a good influence, definitely). Oh, and it’s interesting that Lois says Clark sounds like his Pa... that seems to say the New 52 business with Jonathan and Martha Kent dying in a car crash before they could ever meet Lois is gone. Good.

As for the big, bombastic moments, they’re very enjoyable, especially Superman’s meeting with Bizarro No.1.

This issue also gives us another new character... 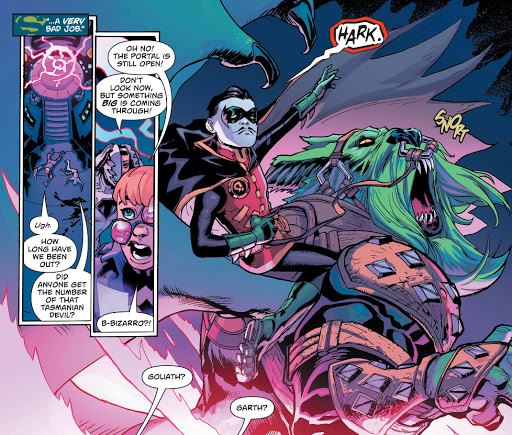 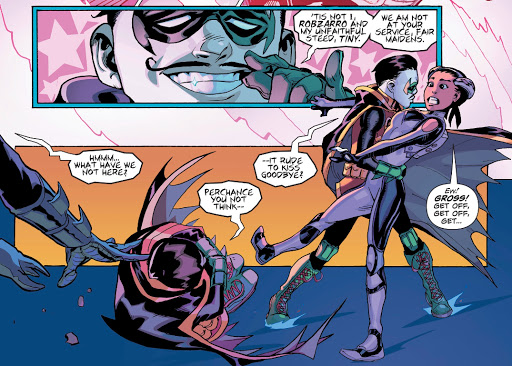 Polite, sweet, Alfred moustache... it has to be Bizarro Damian Wayne. (Does anyone know why one the girls cries out ‘Garth’? Just a typo?)

The book comes with a cracking cliffhanger, which I will spoil...

... in a Bizarro way! Read the issue for yourself, it’s a wonderfully earned set-up for next issue which, I believe, is truly the end of an era.

For now, enjoy the terrific dialogue and pacing from our co-writers, and gorgeous, powerful art from Gleason and Joe Prado. The compositions, finishes, acting... these are pages to cherish, all coloured thoughtfully by Stephen Downer. The most powerful page is Boyzarro ‘playing’ with Jon’s toys -it’s seriously creepy, but illluminates the imperfect duplicate’s mindset and the grace under pressure Jon has learnt from his parents. And there’s terrific lettering, as ever, from Rob Leigh. 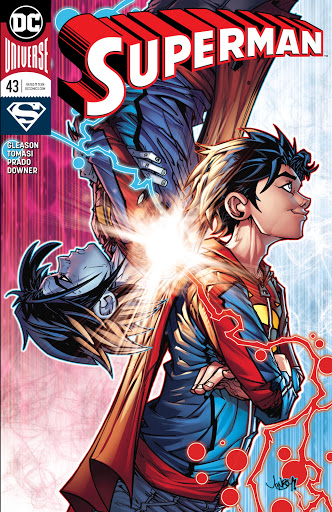 The alternate covers are very different, but both excellent. Choose from the regular run image by Gleason and Alejandro Sanchez, a shockingly savage depiction of Boyzarro, or the sweeter ‘compare and contrast’ illustration by Jonboy Meyers. Each reflects an aspect of the interior comic - it’s just great work all round, all directed by editors Jessica Chen and Paul Kaminski.

So, the end is nigh. I’d love to hear what you think of this issue, and get your thoughts on DC’s decision to shut up shop on what has been one of my favourite corners of the DC Universe these past two years.