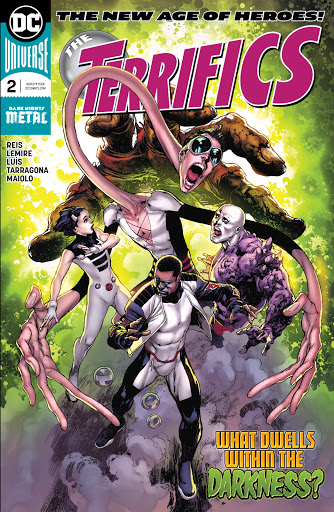 Plastic Man, Metamorpho and Mr Terrific are lost in the ‘Dark Multiverse’. They’ve come across a young girl, Linnya Wazzo, whose natural ability to become a phantom has stalled. As they’re wondering about the holographic image that’s appeared before them of one Tom Strong, Linnya explains how she got there.

Travelling between the worlds of Bgztl and Bismoll in a private rocket ship, a rift in the midst of a space storm prompted her parents to put her into an escape pod. Linnya’s mother and father thought she’d escape while they would be sucked into the white hole. But that was Linnya’s fate. And since then? 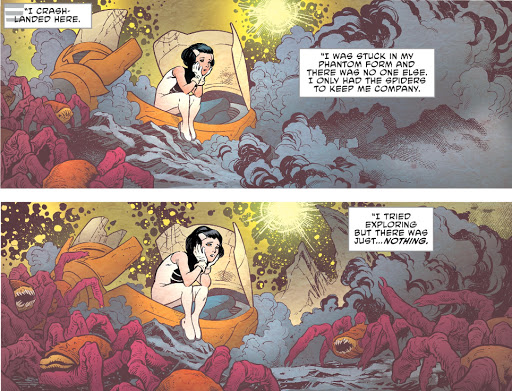 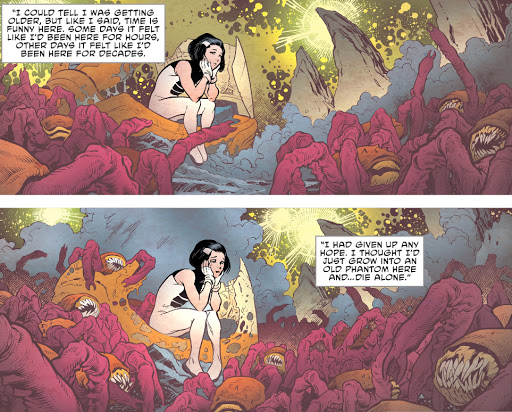 Metamorpho is sympathetic to the young woman who’s lost her childhood, family... everything she knows, but Mr Terrific has no time for this tale of tragedy. He wants to get home, and take with him the antennae that’s projected the message from Tom Strong. Who Tom Strong is, he doesn’t know, but his message that a universe needs saving merits Terrific’s immediate attention.

Like legendary Excalibur, the antennae doesn’t want to move. But together, the men rip it out of its stand. The released energies cause something to stir. Something big...

The second issue of DC’s teen book spinning out of the Dark Knights: Metal event is a fast-moving, great-looking superhero comic. I like that writer Jeff Lemire immediately gets into Linnya’s origin, with its Superman parallels and nod, via Braalian magno ball, to the Legion of Super-Heroes continuity from which all Phantom Girls derive. And he’s giving her a distinctive speech pattern, younger than that of the guys, which makes sense.

I’ve not recapped the whole comic but it’s safe to say that as he barks orders through the chapter, Mr Terrific gets on a few nerves, which could lead to some, hopefully, team tension. I don’t want the heroes at one another’s throats, but it’ll be interesting to see who gets behind Terrific and who - besides Metamorpho - will find him only borderline tolerable. I can’t see Mr T looking up ‘humility’ in the dictionary and trying to gain some. I’m very curious as to how he’ll persuade his new pals that the team born here should bear his name and branding.

It’s not like he’s as bright as he thinks... 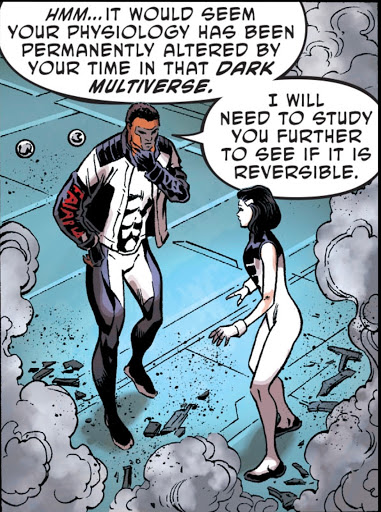 ...unless he’s seriously not that interested in helping Linnya, and hoping she doesn’t notice how words work. I mean, either her physiology has been permanently messed up, or it may be reversible.

Rex and Plas are once again used well, their powers complementary. I’m pleased that Plas is just Plas, he’s not being all super-cosmic as hinted in Dark Knights: Metal... he’s a classic character in part because he’s so simple to understand. He’s plastic fantastic, not a multiversal force.

Ivan Reis doesn’t pencil the whole book, as José Luís handles the last quarter, and if I’d not been told, I’d likely not have noticed - their styles, as inked by, respectively, Vicente Cifuentes and Jordi Tarragona, are really close. The figurework is great, the big moments delightfully over the top, the storytelling splendid - the nearest I have to a complaint is that like last issue we get a spread of a space giant. The space was merited as a big reveal then, but a single page would have done the job here.

Marcelo Maiolo likely smooths out any wee differences in the art teams, along with providing some cracking colour schemes to represent out-there energy. And when we get back to earth, his tones ground things nicely. Then there’s Linnya’s flashback, which is cleverly muted. We do, though, need a visual signifier for when Linnya’s in phantom form, at the moment she looks solid all the time. The craft of letterer Tom Napolitano is also appreciated - there’s an especially nice final page treatment of next issue’s story title.

Reis and Maiolo‘s cover is gorgeous - it’s a shame the logo gets in the way of the giant hand, but the ‘New Age of Heroes,’ slug pushes down ‘The Terrifics’. Oh well, it’s still eye-catching overall.

Two issues in and I can safely say DC has a winner with The Terrifics. Is it too soon to ask for an Annual?