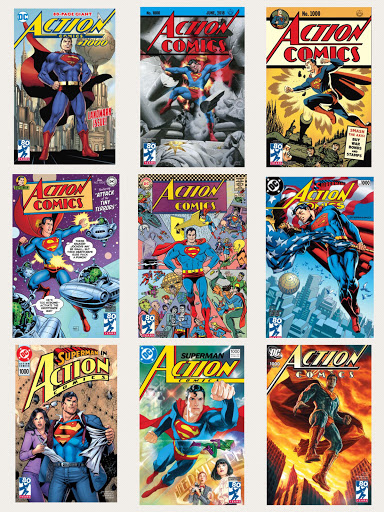 It’s Superman’s 80th birthday. Eight decades ago today, Action Comics #1 appeared on US newsstands and an industry was born. Jerry Siegel and Joe Shuster’s ‘champion of the oppressed, the physical marvel who has vowed to devote himself to helping those in need’ has changed a lot throughout the years and this 80pp giant aims to be a tribute to the character and the many creators who have told his story. So does it succeed? 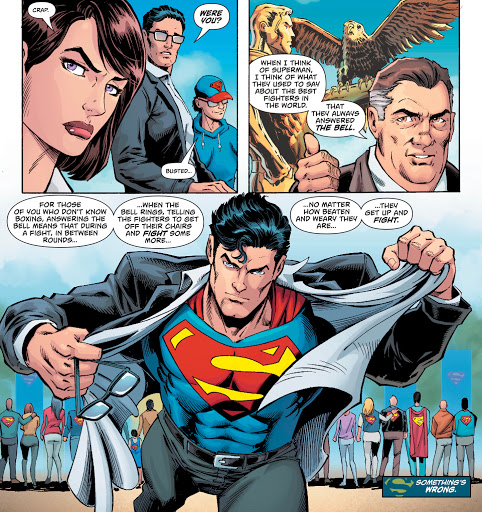 The book opens with a story written and pencilled by Dan Jurgens, who has been involved with Superman for decades, in two long runs. He’s been writing this series for the last couple of years but is making way for a new guy. He signs off with From the City That has Everything, a wonderful day in the life tale. It’s Superman Day in Metropolis but the Man of Tomorrow is distracted by the threat of an alien invasion. Sharply inked by Norm Rapmund, this is a charming look at what Superman means to the people of Metropolis, as well as his peers. It’s classic Jurgens - full of heart. 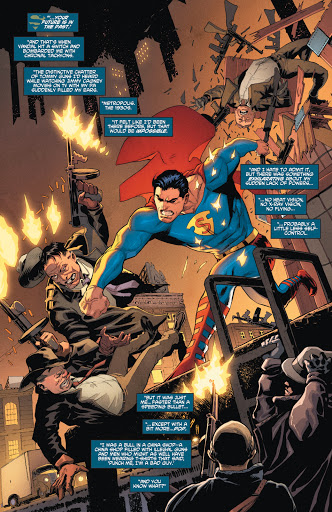 Peter J Tomasi and Patrick Gleason, who step down as the creative team on Action’s companion title, Superman, this week, go epic. Vandal Savage, the immortal villain who in publishing terms has been around almost as long as Superman, wants to take down all Earth’s heroes, starting with the mightiest, most inspirational - Superman. Mad science allows him to send Superman into Hypertime, where every world you can imagine has happened. Superman has travelled through versions of his comic strip continuities previously, in the excellent Time and Time Again arc (it’s traded, if you don’t have it, buy it), but this is a more meta narrative; the Man of a Steel connects to the altered versions of himself to the extent that he feels he’s actually lived these lives. Which, of course, he has. The gimmick of Never-Ending Battle allows us to see Superman not just in his canonical comic continuities, such as the Golden and Silver Ages, but as he appeared in the Fleischer cartoons, on the Silver Screen and in Elseworlds. Tomasi’s Superman doesn’t panic, he works out how to get home, while Patrick Gleason shows massive versatility evoking the styles of other times and places. And the final page reminds us what a treasure the Tomasi/Gleason-guided adventures of Clark, Lois and Jon Kent have been. All this and a cameo from Easy Company... what more could you want? 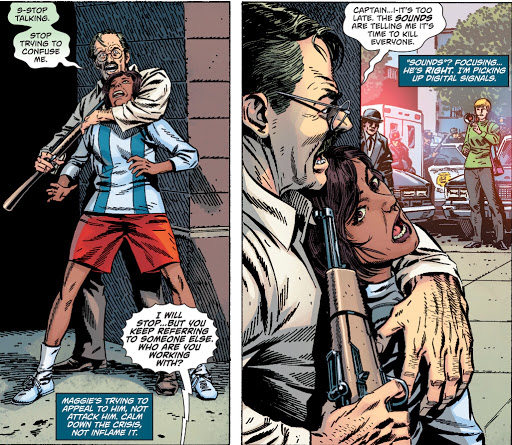 The Enemy Within is a real curiosity, a five-page story comprising four pages of unseen Curt Swan artwork with a final splash reprinted and repurposed from one of DC’s first mini-series. An original story by Cindy Goff, penciller Swan and inker Butch Guice is reworked by Marv Wolfman, a writer who made a big impact on Action in the Eighties. It’s a pretty straightforward Brainiac vignette showing us that inspiration is a two-way street. The final page is by Swan and his contemporary Kurt Schaffenberger, and it’s a little jarring after the previous pages - Guice’s dark finishes are miles from Schaffenberger’s smooth blacks, but if this is the only way to get two Superman greats, Swan and Schaffenberger, into the book, I’m all for it. And Wolfman does a fine job with what little room he has. I am curious as to the story behind the story, though - Goff’s only previous Superman work seems to have been a Lois/Jimmy team-up in Showcase ‘95 and the long-ago Metropolis SCU mini-series, which starred cop Maggie Sawyer, who takes centre stage here while Superman is present basically as narrator... maybe it was a cut scene from there? 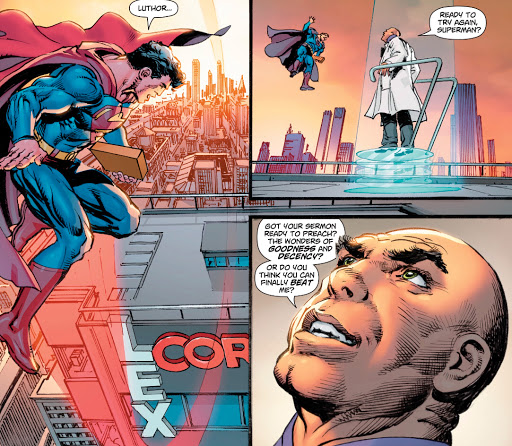 Neal Adams, whose art revolutionised DC back in the Bronze Age, and who drew dozens of memorable Superman covers, illustrates a very smart Superman and Lex Luthor encounter (DC must really like it, as it’s in the 80 Years of Superman book that’s just come out). The Game is written by Paul Levitz, a classic DC writer who never had a run on Superman. This short hints that we missed out there. I prefer Adams with an inker - his best work was made with the late Dick Giordano - but you can’t blame a guy for wanting to get his vision down on paper undiluted. And the story does look great, complete with the iconic ‘breaking the Green K chains’ image Adams gave us a few times. 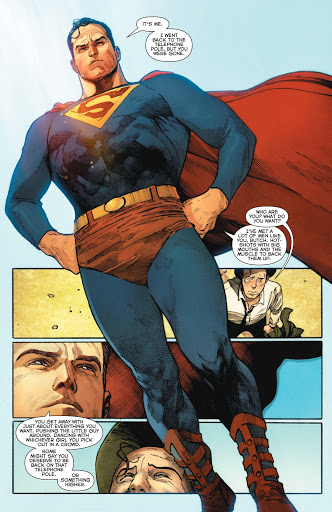 Ever wonder what happened to the hood who drove the automobile Superman is smashing up on the cover of Action Comics #1? Writers and film guys Geoff Johns and Richard Donner have, and in The Car they connect the rufty tufty original Superman to the more compassionate guy he became. The script is terrific, and art by Olivier Coipel ensures this is a huge, unexpected treat. 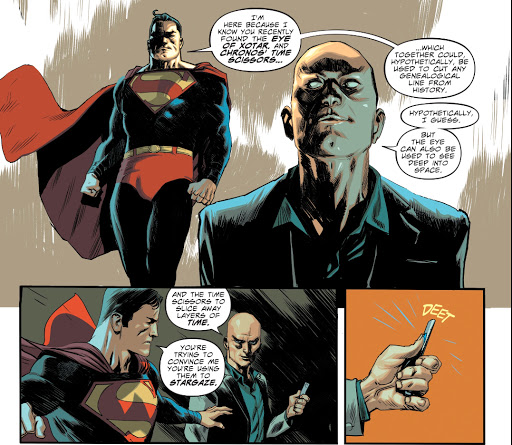 Lex and Superman are together again, at the Smallville Planetarium, in The Fifth Season by Scott Snyder and Rafael Albuquerque. It’s a nice conversation piece between two people who’ve known each other their whole lives and can’t understand what each has become, with snappy dialogue and some wonderful shots of Luthor by Albuquerque. I just wish I understood the final panel - the story seems to pause rather than end. 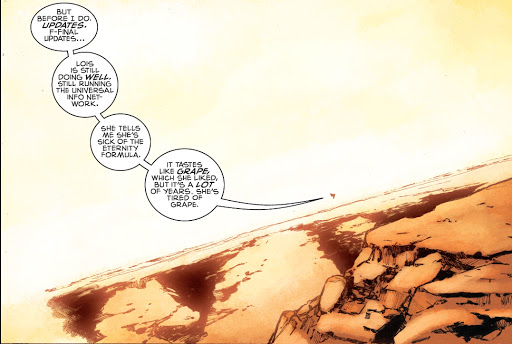 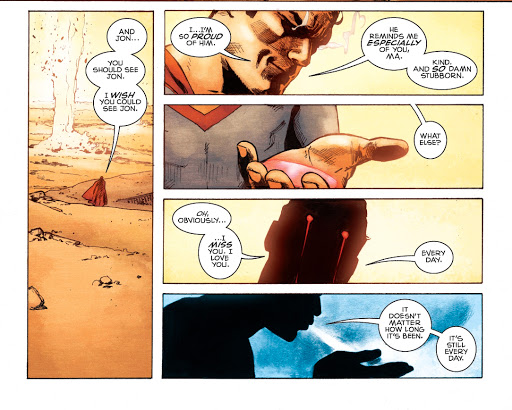 Of Tomorrow is all about endings - Superman is five billion years old and saying goodbye to Earth. The planet’s sell-by date has been reached and he’s ready to let go... but not before one last graveside chat with Ma and Pa Kent. I’m not a fan of the ‘Superman is an immortal’ bit, it makes him a little too alien, but writer Tom King uses the conceit well, while illustrator Clay Mann and colour artist Jordie Bellaire convince me that the sun really is flaring to its final farewell. 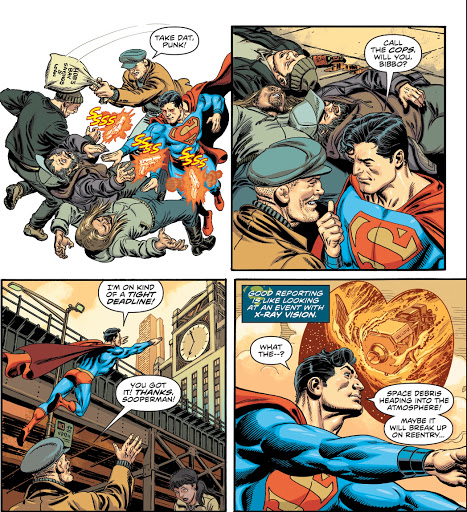 Two more great Superman alumni return to the spotlight as writer Louise Simonson and artist Jerry Ordway spend Five Minutes in Metropolis. Clark has a Daily Planet deadline to hit but there are urgent jobs for Superman. Simonson and Ordway’s return to Superman’s supporting cast, such as Perry White, Jimmy Olsen, Bibbo and Ron Troupe, is effortless, and welcome. I’d take a Superman series by these two any day of the week. 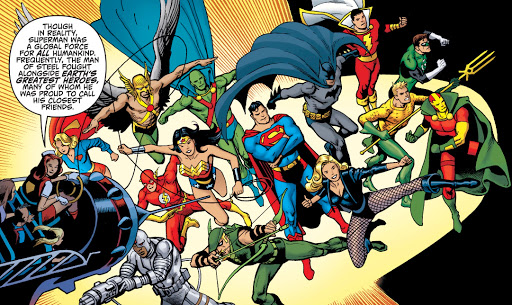 Somewhere out there lies Actionland, where interstellar tourists can look back on Superman and his world. It’s one thrill ride after another, but there’s a problem with the event’s climax... Paul Dini brings in one of Superman’s classic villains and his rarely seen girlfriend in a clever piece of whimsy. A cameo of the Bronze Age DC heroes allows penciller José Luis García-López to remind us why he was DC’s go-to guy for licensing art for many a year. Every page, though, is a gem, all of them inked with a more delicate than expected touch by Kevin Nowlan. 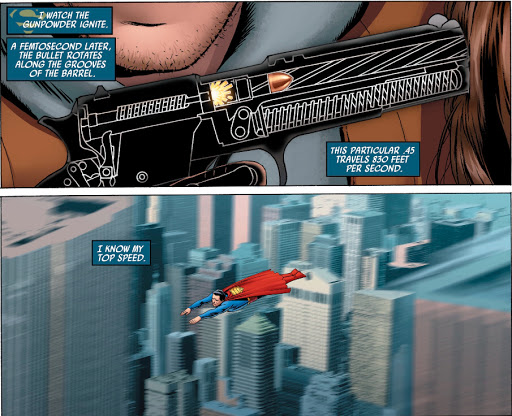 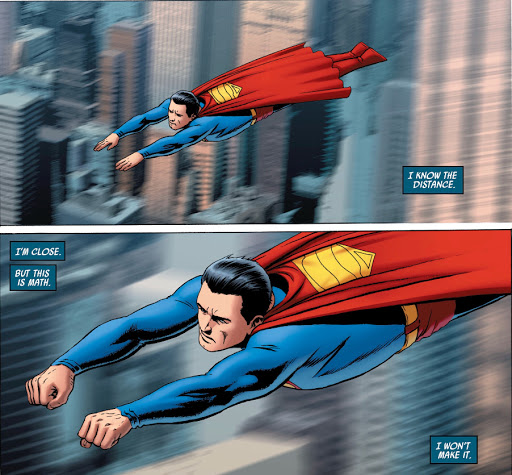 Faster Than a Speeding Bullet is a matter of maths as Superman fears he won’t be in time to save a hostage from a gunman. This is high-concept heroics courtesy of writer Brad Meltzer, artist John Cassaday and colourist Laura Martin. 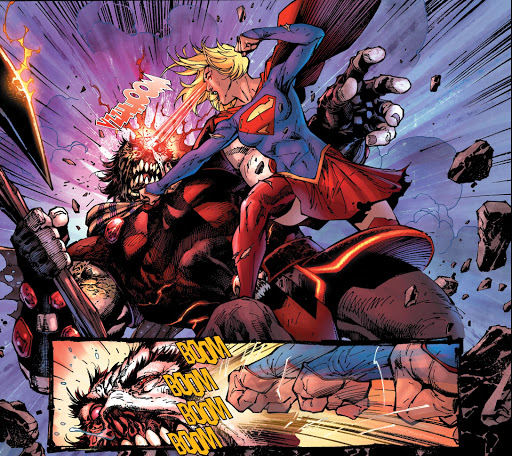 And finally, the story that begins a new period in Superman’s publishing history, as big name transfer from Marvel Comics Brian Michael Bendis gives us The Truth. Allegedly. There’s a majorly powerful new space villain, Rogol Zaar, in Metropolis and he’s beating the heck out of Superman and Supergirl. While the final revelation is nothing we’ve not seen previously - and as shocks go, small beer compared to Action’s recent Mr Oz silliness - the story moves along nicely, and I like that Bendis has two citizens doing their bit to help Superman, though they do exhibit the trademark inappropriate glibness of his Marvel characters. It’s good to see Supergirl in there, even if she does about as well as her cousin against the baddie, and she’s looking darn powerful in the best Jim Lee/Scott Williams art I’ve seen in a long while. We were promised an explanation for the return of the shorts, and it boils down to ‘Superman didn’t look like Superman without them’. Fine by me

The issue is rounded out by pin-ups by John Romita Jr, Walt Simonson and Jorge Jimenez - well, the physical copy, anyway, they’re not included in the digital version from ComiXology. What we do get is every one of the decade variants, my favourite being the Mike Allred Sixties spectacular. So of course, that was sold out at the comic shop, meaning I opted for the gorgeous Steve Rude 1930s image - it’s a hugely powerful piece and boy, that original logo, with ‘COMICS’ almost as big as ‘ACTION’, never gets old.

I’ve read a lot of anniversary issues, and plenty trying to encapsulate what Superman ‘means’. This is one of the better collections with some absolute aces, and everything else pretty darn solid. A splendid birthday gift for the Man of Steel.