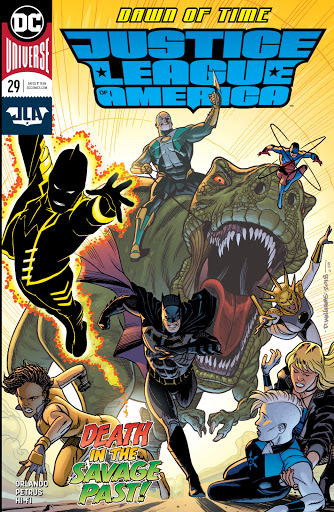 It’s the final issue of Justice League of America, and boy, is it packed. It starts of millions of years in the past and ends with the promise of a bright new future. In between we get so many great moments - a massive development for Killer Frost, the return of a very obscure DC locale, Aztec proving her worth to the team... and lots, lots more. It’s so good I won’t do the play by play, simply urge you to buy this terrific comic from writer Steve Orlando, artist Hugo Petrus, colour house Hi-Fi and letterer Clayton Cowles. Maybe one of the two great covers, by David Williams & Steve Buccellato, or Francesco Mattina, will seal the deal.

Like much of Orlando’s work, it’s a love letter to the more obscure corners and characters of the DC Universe. Not since James Robinson was on Starman has a writer so revelled in putting nuggets of untapped potential before us. But Orlando never comes across as self-indulgent: every character from, say, a little-loved Nineties crossover, or locale from an obscure cosmic mini-series, has a purpose, even if it’s just to remind us of the richness of DC’s eight-decades long tapestry. Good grief, in the last few issues Orlando, with stunning art from Petrus and Hi-Fi, has made a convincing argument that stripey-legged Silver Age Atom baddie Chronos should be up there in the Pantheon of Villainy with the likes of Lex Luthor, Captain Cold and Sinestro - he’s been seriously impressive.

But great as the battle against the infinite armies of time-bending Chronos is, it’s the ending of the issue that really excites me, as the JLA finally fulfils the promise of its early issues, becoming something new. OK, here comes the big spoiler. There’s a fresh team on the block and its name is... 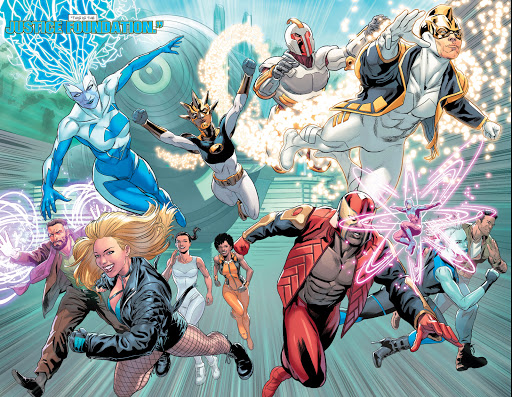 I see Black Canary; Vixen; the Ray; his super-engineer boyfriend Xenos; (No Longer Killer) Frost; the Ryan Choi Atom; the new Aztek; Freedom Beast; Extrano, reformed crook Insight and Strange Visitor from Orlando’s just-ended Supergirl run; and... a woman in white. It’s going to be seriously embarrassing when one of you enlightens me, but would one of you please enlighten me?

I foresee three ways the Justice Foundation can go - DC has a surprise series planned; they’ll be left on the backburner until Orlando or some other writer has a chance to use them; or they’re going to be cannon fodder for Scott Snyder’s upcoming No Justice crossover.

Please don’t let it be the latter, DC.

For now, I’d like to thank Steve Orlando and all his collaborators for a JLA series that was surprising, full of optimism and never less than solidly entertaining.