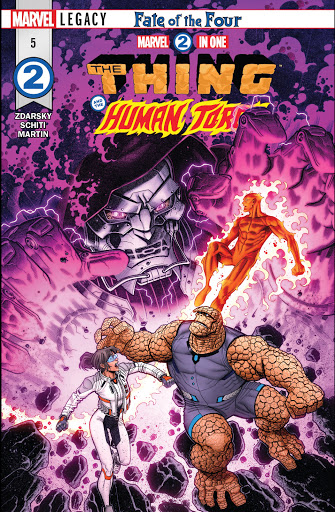 Johnny Storm and Ben Grimm are searching the Multiverse for Reed and Sue Richards, with the aid of super-scientist (aren’t they all?) Rachna Koul. As this issue begins they're on an alternate Earth, one where Dr Doom beat Galactus by taking over his body. The dictator turned devourer of worlds has absorbed the energy of every being in the rest of the universe and now he’s coming for Earth. And what’s the local Reed Richards doing about it?

FF all. He’s been moping for years, after his Ben died trying to stop Galactus, and Doom succeeded where the Fantastic Four failed. Johnny is alive, but his absence unexplained, while Sue finally left Reed to head up an iteration of SHIELD comprising most of the world’s superheroes.

Our Ben isn’t impressed with this version of his best friend. 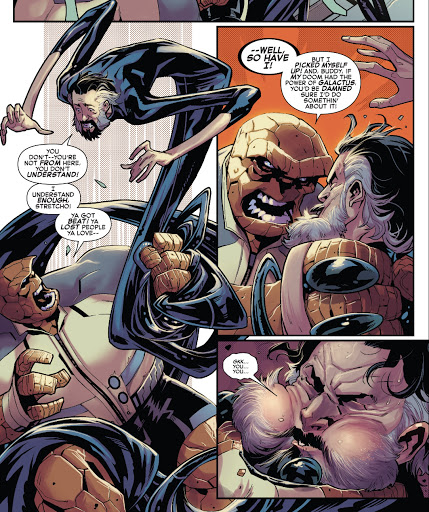 Rachna, meanwhile, is pursuing her own agenda, one she’s not shared with the boys... it seems she’s scouring the Multiverse for a cure for a woman named Dee who means a lot to her. This world looks like it won’t be able to help. 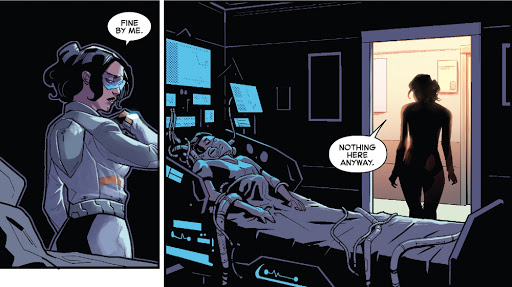 Back at the Baxter Building, this planet’s Sue shows up, and Johnny couldn’t be happier. 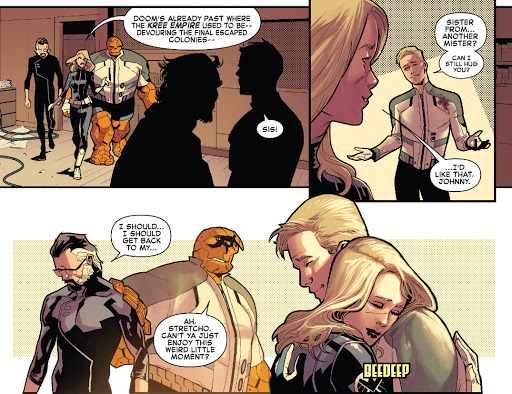 The joyous moment, though, is soon set aside as a swarm of Doom heralds invade New York. The Devourer isn’t far away...

I love this issue. After four instalments with several great moments, this chapter had me smiling from start to finish. I’m a sucker for alternate worlds, with their What If potential, and seeing ‘our’ Ben and Johnny set aside their own pressing concerns for what might be this world’s last stand was wonderful. That’s the spirit of the Fantastic Four that’s been missing from the Marvel Universe for the last decade or so (and yes, I realise the team’s only been without a series for three years).

Said pressing concerns don’t end with the hope that Reed, Sue and children Franklin and Valeria are out there somewhere, it seems they need to be reunited for practical reasons. 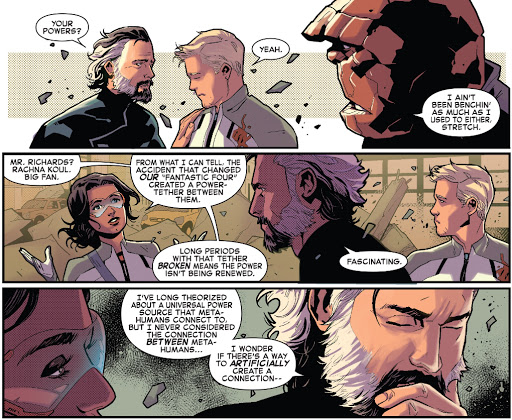 While the Sue and Reed here are variants, seeing them team up with our Ben and Johnny felt so right. I’m with Kamala Khan. 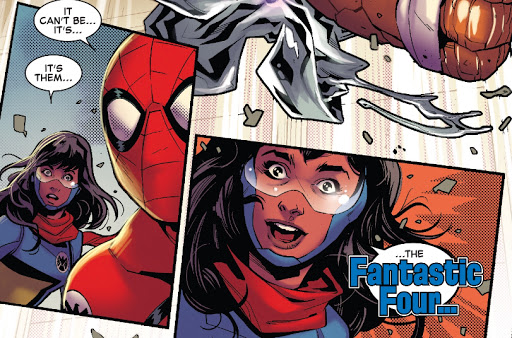 This issue also has a couple of surprises up its sleeve which promise fireworks, courtesy of writer Chip Zdarsky, who should be required to step up the second Dan Slott leaves the upcoming Fantastic Four relaunch. Given Slott’s commendable staying power, that will likely be in a decade, but hey, he’s a young guy. And I believe this series is continuing, so we’ll still get a dose of his spot-on Thing and Torch.

The big selling point of the first couple of issues of this title was the artwork of Jim Cheung which, as expected, was good. To my mind, though, the artist of the last three issues, Valerio Schiti, is no second-best option - his characters have dynamism and warmth, his storytelling is splendid and his action scenes classic Marvel. I particularly like his depiction of Reed using his powers - Mr Fantastic indeed! 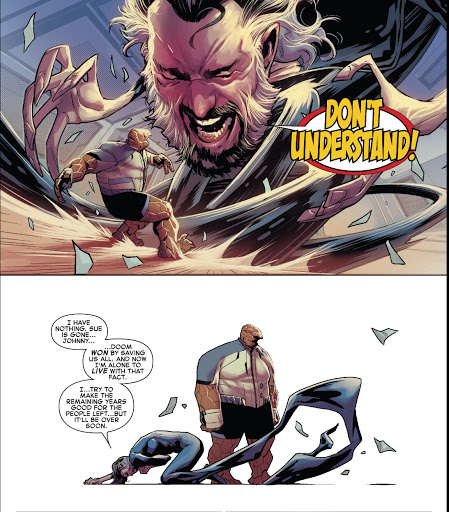 The only thing I don’t like are the uniforms Ben, Johnny and Rachna are wearing, fussy, racing driver numbers, but it’s not like they’re going to survive the return of the FF book, so I can let it go.

Nick Bradshaw’s cover with colourist Morry Hollowell is classic FF, with its looming Doom. I like it.

The heralds of Galactus play a significant role here. Well, If Marvel 2 In One is the authentic herald of the new Fantastic Four book, we’re in for a treat.