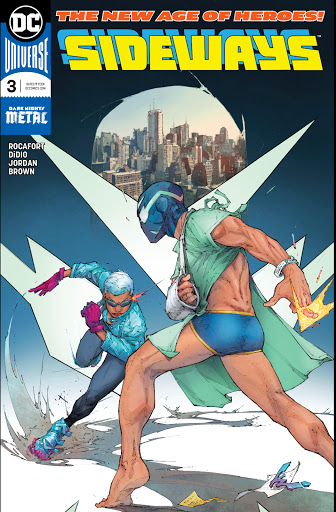 New superkid on the block Sideways was resting in hospital after his first encounter with a cosmic entity when metahuman Killspeed attacked. As we join him this issue his mother, Helen, and best pal, Ernestine, are unconscious and he’s got to keep the malevolent speedster from killing them - and everyone else in the facility. And he’s not quite dressed for action, as you can see from Kenneth Rocafort’s cute cover.

But Sideways is a smart lad, quickly learning what he can do with the powers gained when the Metal event hit his Gotham home. As well as super-strength, young Derek James can will portals into existence, dimensional doors he can look into and travel through. They’re very useful for getting rid of would-be killers. 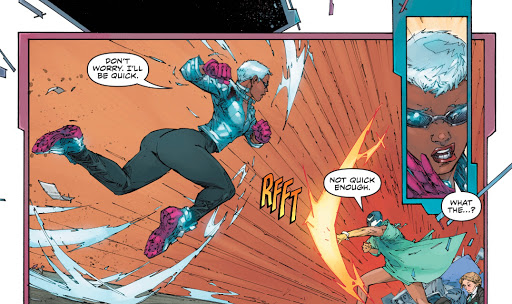 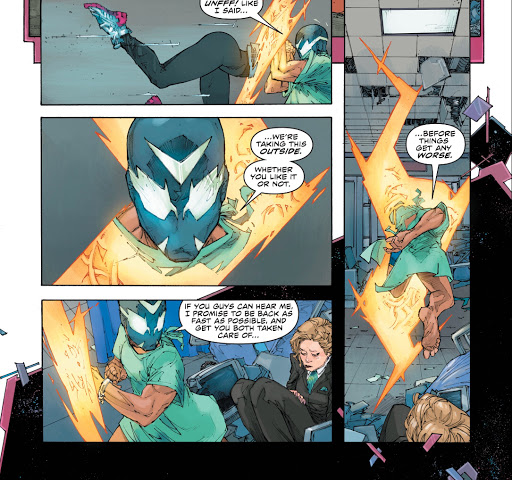 So the fight continues away from the sick and innocent, giving Sideways a chance to learn more about Killspeed. 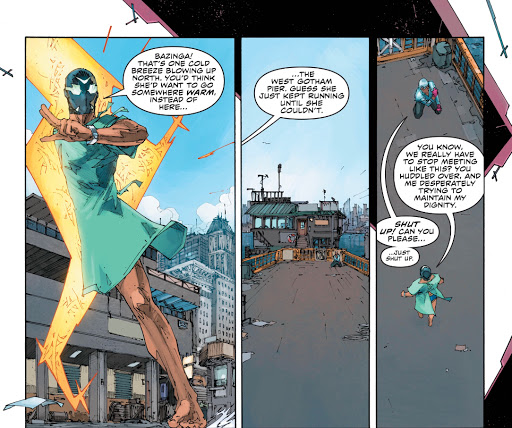 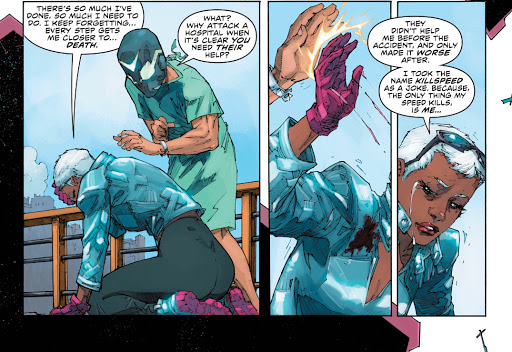 She’s going to die, and she wants to take others with her. Not cool. Unlike Sideways’ superheroic undercarriage.

Killspeed has so far been a total menace, but Derek is a good guy, and wants to get her help. Will she acquiesce? Buy this issue and find out - so far this series has proven a breath of fresh air in the DC Universe, and not just because Sideways - fights crime in his undies - is the most Peter Parker hero since Firestorm. There’s a sense of infinite possibilities to the set-up; yes, Derek has so far limited his jumps to Earth, but there’s every chance he could ‘rift’ anywhere in the multiverse should he learn how to tune in to other realms

The relationships with his mom and Ernestine are, so far, refreshingly uncomplicated - they both love Derek and he loves them. We’ve not seen much of Dad David yet, but he seems a decent sort, too... fingers crossed Derek’s parents stay nice and normal, no revelations of previous lives as spies or their being originally from a millennium hence, if you please. This issue’s ending sets up some intrigue around one of Helen’s colleagues, that’ll do for me.

As for villain Killspeed, I like that she’s connected to events in the Flash, and that we get to understand her a little - there’s a spot of subtle social comment attached to her origin, which makes a change for a DCU book that’s not Green Arrow. And the price Killspeed pays for her antics had me smiling.

She could do with looking a little less like Sideways’ New Age of Heroes stablemate Silencer, but that’s my only niggle with Kenneth Rocafort’s art. All the characters look great. Derek may not like to fight in a hospital gown but it’s preferable to his costume, which is straight out of the Nineties Image catalogue. Helen looks businesslike, but her elegance can’t mask the natural worry she has about raising a child in the ever-madder Gotham City... and she doesn’t actually know her boy has joined the superhero set. And the cool intelligence of Ernestine is just what Derek needs to help ground him as life gets loonier. Rocafort’s layouts are abuzz with energy, which Dan Brown keys into while adding his colours - there’s no denying this is a great-looking book. How often does a superhero comic have a double-page spread worthy of the space? This one does.

And it reads nicely too, with co-scripters Dan DiDio and Justin Jordan giving everyone nicely natural dialogue. DiDio, who co-plots with Rocafort, brought the younger Jordan in to help give Derek, Ernestine, her twin Emeline and their contemporaries a 2018-specific tone. Not being around today’s North American kids I couldn’t begin to say how well Jordan succeeds, but certainly nothing laid out by the excellent letterer Carlo M Mangual jars.

The encounter with Killspeed takes up 16 pages, with the other four a mini-story that has Sideways recapping his origin for the readers. He’s addressing us, but we’re not in Animal Man/She-Hulk territory, it’s just a harmless narrative device that gets everyone up to speed with charming economy. 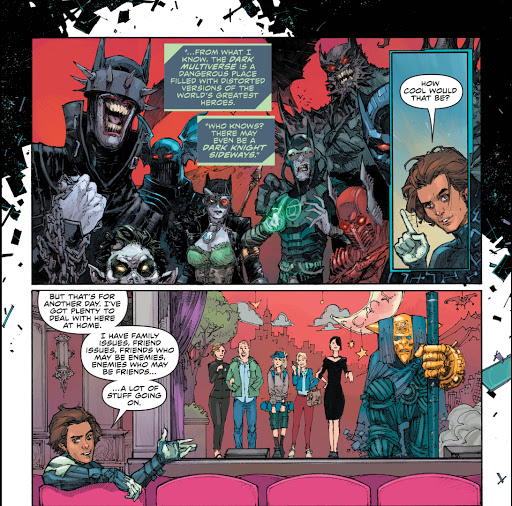 The bonus tale - think early Sixties Marvel - helps make this issue a fine jumping-on point. If you’ve not tried Sideways, give it a go.