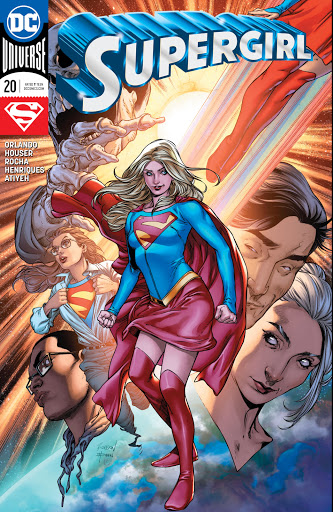 At the end of last issue Supergirl appeared before Ben Rubel, incoming boyfriend of her alter ego Kara Danvers, wanting to talk. Was she going to reveal her secret identity? 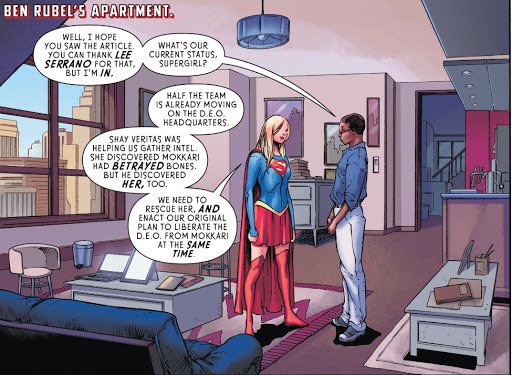 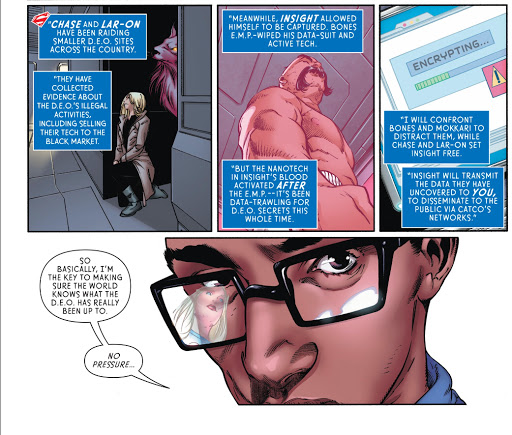 As it happens, no. She wants his skills as a communicator.

So while he doesn’t learn that he recently kissed Supergirl, Ben is certainly in the Maid of Steel’s inner circle. Before the plan can be enacted, though, Mr Bones and manipulative crony Mokkari are attacked as they cross National City. 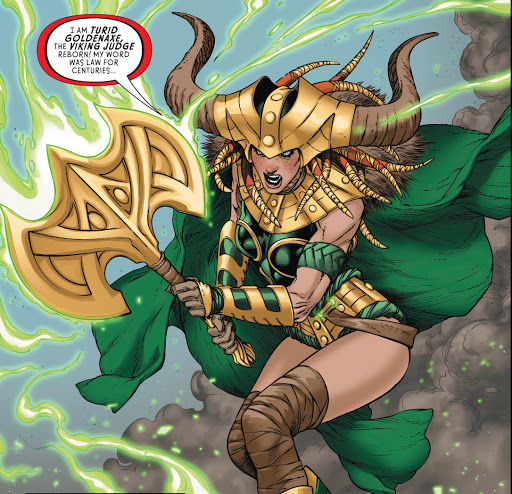 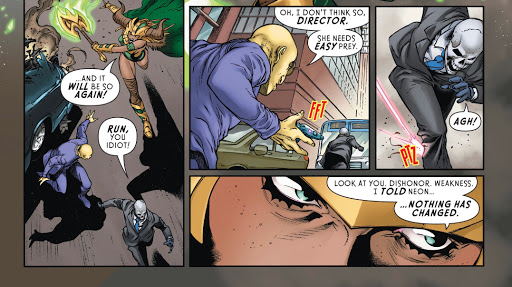 Plan derailed, Supergirl’s goodness means not defending the men who’ve been trying to take her down isn’t an option. 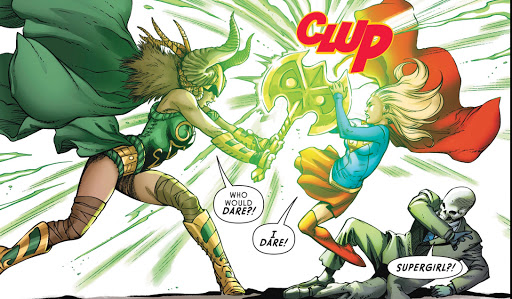 The Viking Judge is magical, meaning she can hurt Supergirl, but Kara’s never going to give up when weaker people need her help. Even sadistic scientists from Apokolips. 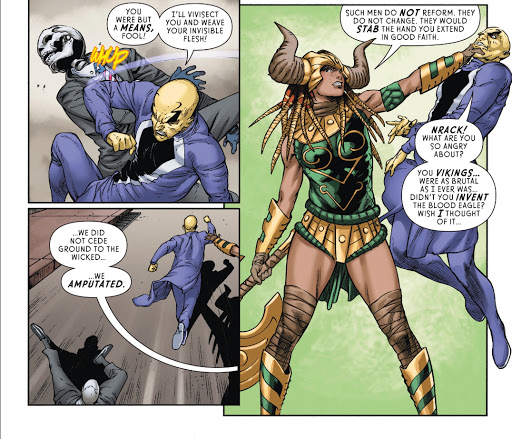 Well, this was a surprise. I never expected the final issue of this Supergirl run to turn into an advertisement for co-writer Steve Orlando’s upcoming new series The Unexpected, a team book featuring the Viking Judge. I suppose you can’t blame a guy - he knows a lot of us have enjoyed his work here, so why not grab our attention before Supergirl’s book disappears in a cloud of Bendis?

And the Viking Judge does prove formidable enough to allow Kara to shine, showcasing her strength of character along with the Kryptonian power set. The unfortunately named Turid Goldenaxe wields a formidable weapon but her true power seems to be to talk people to death. Boy, does she speechify. Happily, another Unexpected guest pricks her pomposity, letting us know Orlando and talented co-writer Jody Houser aren’t taking her too seriously.

I hope my pessimism is unfounded and that whatever mission new Superman writer Brian Bendis is sending Kara on doesn’t preclude her interacting with her most recent supporting cast. Orlando and, latterly, Houser have worked hard to give Kara a life outside the costume and I’d like it to continue. There are plenty of plot threads that still need vacuuming up - Ben’s unseen parents being the one I’d most like to see followed up.

One thing I love about this issue is that three of Supergirl’s allies are people she first encountered as antagonists, showing that Kara’s oft-mentioned policy of never giving up on someone really does work. This gal could teach TV Wonder Woman a thing or two about making a hawk into a dove.

No discussion of an Orlando comic is complete without spotting the DC trivia. This time, the obscure reference is aimed at vintage Legion of Super-Heroes fans... I really hope he follows up on it somewhere.

Robson Rocha pencils this issue, Daniel Henriques inks and Michael Atiyeh colours and the results are really rather good. Rocha’s compositions are appealing and the expressions he gives Kara always fit the moment, while Henriques’ finishes are assured. The action scenes are nicely choreographed, whether it’s Supergirl battling the Viking Judge, or Cameron and Lar-On breaking into the DEO. And how’s this for a side-block? 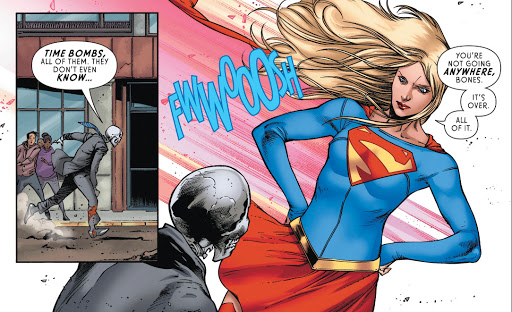 I hope this art team gets a new regular gig soon, as they’ve shown they can produce solidly stylish superhero art. I’ve no worries about ever-excellent letterer Steve Wands, he pops up all over the place. I do look forward to seeing what book fills this spot on editor Jessica Chen’s roster - she’s shown she can run a great series. 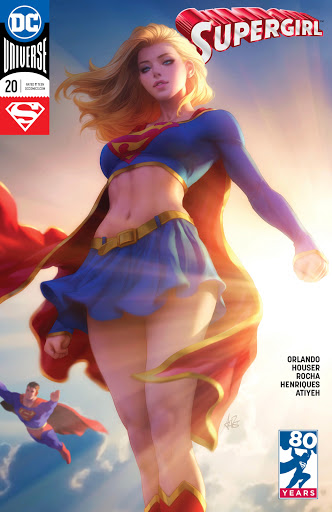 The art team produces the regular cover, a lovely poster-style number showcasing the main cast, though the departing legs of Supergirl are a weird choice... Bones could have been placed there rather than under the logo. The variant is another lovely piece of work by Stanley ‘Artgerm’ Lau, spotlighting Michael Turner’s Supergirl design - the Lolita-like costume is still horrendous, but at least this version of the early 2000s Supergirl seems to have room for internal organs.

So, it’s goodbye to another Supergirl series. I’m really irked at DC for doing this to us yet again, to service the ego of a writer more famous than Orlando, but what’s the point of railing against the company higher-ups? They’ve made their decision and who knows, Kara’s next series may be great too. I’m taking the high road - it’s what Supergirl would do.