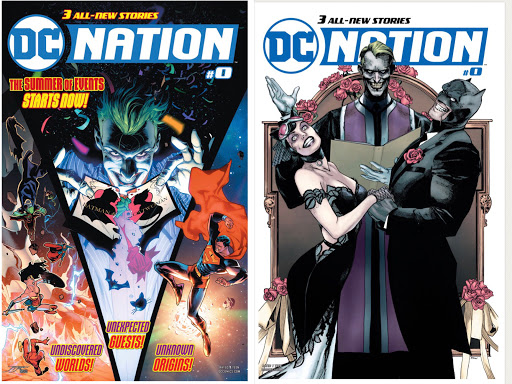 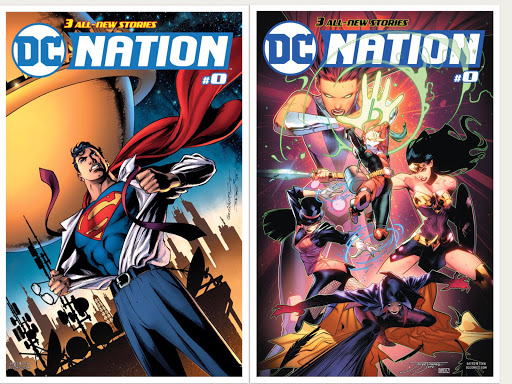 It's Free Comic Book Day this weekend, and to celebrate DC has produced an all-new book showcasing their biggest storylines of the summer. OK, while it's gratis as a digital download, it's not quite free in shops, but 25 cents for a book of this quality is nothing to sneeze at.

And it is quality. The book opens with, to quote the contents page, 'Batman in Your Big Day'. Well, that's a joke, as there's not a whiff of the Caped Crusader, this is a Joker showcase all the way. But it is part of the bigger story taking place in Batman's own book, which has Bruce Wayne and Selina Kyle preparing to get hitched. The Joker's heard 'from a banana' that Batman is getting married, so he's waiting for his invitation. At the home of a complete stranger - to him AND Batman.

It's really rather painful watching everyday chap Roger Martello tormented by the Joker's gags as they wait for the mail to arrive; Roger knows there won't be an invitation - and what will the Joker do then? Just look at the guy's face before the inevitable disappointment. 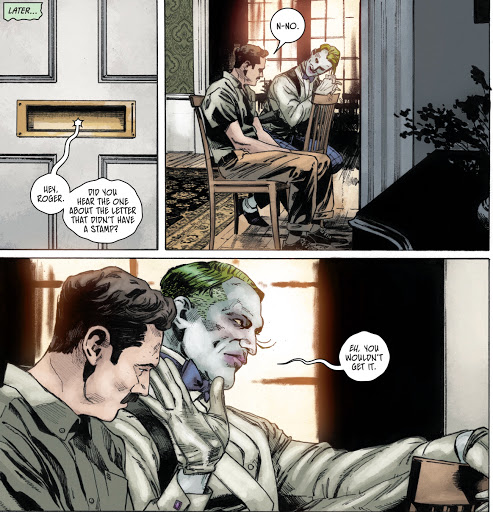 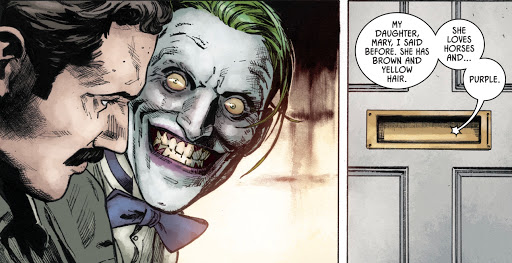 This is a quietly taut thriller from writer Tom King, artist Clay Mann, colourist Jordie Bellaire and letterer Clayton Cowles, nicely paced, a feast for the eyes and guaranteed to brings a few more readers to the nuptials of Bat and Cat. But will the Joker be there? And if so, will he sit on the bride or groom's side?

The Justice League summer event, No Justice - in which heroes and villains gather at the behest of Brainiac to stop cosmic giants out to destroy Earth - gets a preview. We join the four motley crews - Justice Leagues Wonder, Mystery, Entropy and Wisdom - on missions aimed at saving the Computer Conqueror's homeworld of Colu. They believe the Omega Titans, whose visual brings to mind Marvel’s Celestials, are headed for Earth after Colu, so if they can stop them now...

I’ve not been looking forward to this event, and not just because it seems to have brought the cancellation of Steve Orlando’s quirky, inspirational Justice League of America. It just sounded so silly - not just Darkseid and Lex Luthor on League teams, but Starro the Conqueror? And the lead-in event, Dark Knights: Metal, turned into a bit of a mess after a strong start. 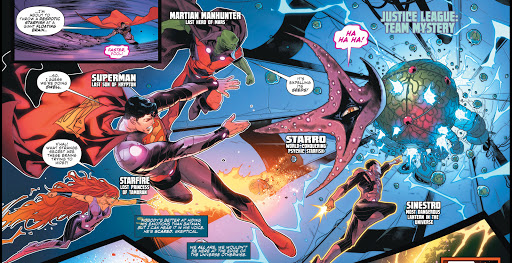 The vignettes we get in No Justice: Prelude, though, show the heroes having similar thoughts to me, which suggests co-writers Scott Snyder, James Tynion IV and Joshua Williamson know what they’re doing. So far as we know, this is a four-week deal, meaning whatever more permanent League emerges, it won’t look like a cosmic Suicide Squad. Meanwhile, I get to enjoy a big, daft team-up, with gorgeous art from illustrator Jorge Jimenez and colourist Alejandro Sanchez, complete with the birth of the Supergirl/Green Arrow team 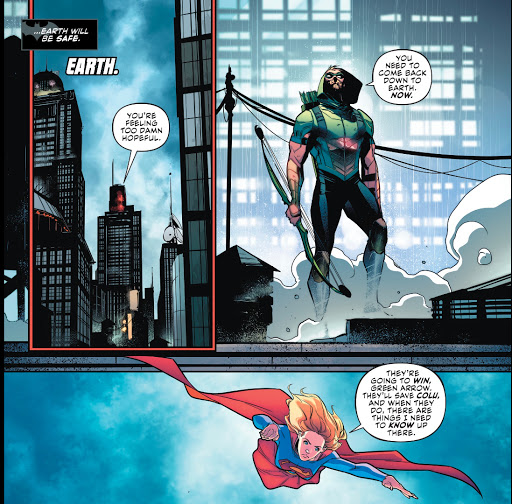 Oh dear, I can’t see a shared series anytime soon, but their cameo is a terrific distillation of their natures - they’re both heroes, but where one is an old cynic, the other always hangs onto hope.

And finally, our second look at how Brian Bendis will approach Superman now he’s grabbed everything in the Kryptonian toy box. Action Comics #1000 showed how he writes a fight scene, this story focuses on Clark Kent at the Daily Planet. The immediate grabber is the beautiful artwork of DC legend Jose Luis Garcia-Lopez, here inked by Dexter Vines and coloured by Alex Sinclair. The storytelling is perfect, the facial and figure work first rate, the inking crisp and the colouring pops. It’s a typically talky Bendis piece but Garcia-Lopez and friends make Office Space dynamic nonetheless.

It’s a clever title, as Daily Planet editor Perry White gathers the troops for one of those gatherings that occur regularly in fiction, but rarely in real life; at my newspaper, a mass meeting with the editor means one thing - redundancies. But here there’s room for a new staffer because Lois Lane has gone. This is all we get: 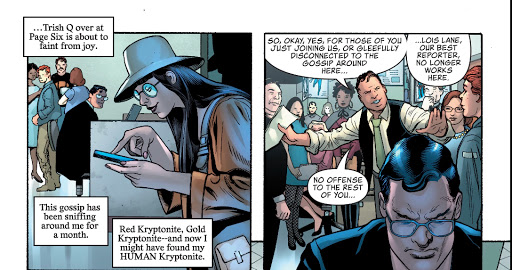 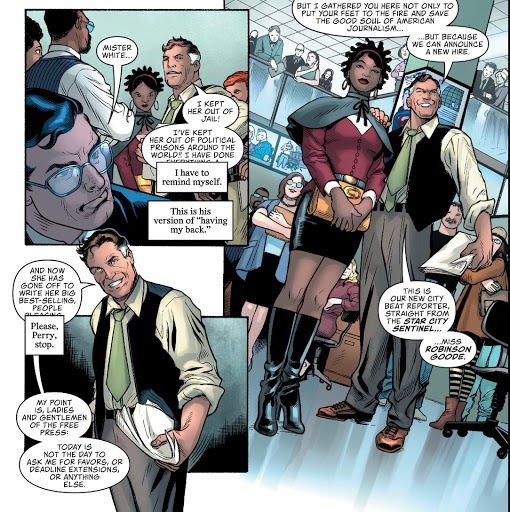 Presumably she’s not dead, or Clark wouldn’t be keeping calm and carrying on, but where is she? Are we going to have to wait until the sixth issue of weekly mini-series Man of Steel before we find out? If Lois, and son Jon, are going to be written out of Clark’s daily life for an extended period, expect a super-hissy fit from me.

For now, I can appreciate the intrigue incoming reporter Robinson Goode brings to the table. The name is ridiculous - new villain Rogol Zaar is named after Bendis’ doctor, so I’ll assume there’s a Robinson Goode out there who sells him cheese, or something - but I’m always happy when there’s a fly in the Planet ointment. 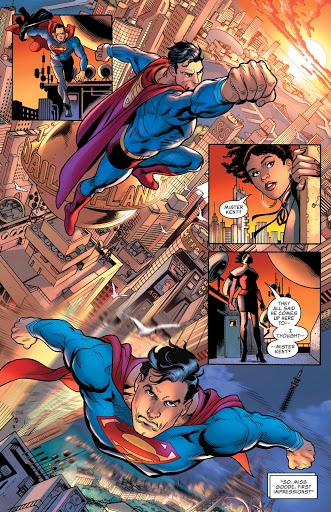 Perry obviously suspects Lois isn’t off writing a book, but Clark is saying nothing. I like how Bendis writes Perry, it’s just a shame Clark can’t open up - he and Lois should have told Perry their secrets the minute they decided they wanted him as Jon’s godfather.

Jimmy seems a little off, snapping pics of his colleagues without permission, but that could be just Garcia-Lopez adding visual interest. He certainly does this with his character design for another new addition, gossip queen Trish Q, who looks like she’s stepped out of a Mike Sekowsky Wonder Woman or Supergirl story. I already want to know more about her. The final panel says the action continues in Man of Steel #1 at the end of the month - I’d assumed this was a flash forward... I hope we’re not getting a story told via recent flashbacks. Do these people not read my constant whinges about ‘Three days earlier’ and the like? Just keep linear, man!

Overall, I like how Bendis writes this issue. OK, Clark calling Perry ‘Mr White’ seems bizarre; I’d assumed this was him being ultra-respectful in front of the other staff but he keeps it up behind closed doors. And the idea that colleagues are gossiping about Lois and Clark, perhaps assuming they’ve broken up, saddens me. But the mystery of the missing Lois is elegantly placed, and - with the help of Garcia-Lopez’ packed panels - the newsroom has a real buzz. I understand Action Comics will, in a rather oxymoronic move, be focused on the Planet while the Superman title hosts most of the, well, action. As long as we get two great books, I’m OK with that - and we really do need series that are way above average, given the two best Superman runs in years have ended for the Bendis tenure. Roll on Man of Steel #1. And bring back Lois and Jon, front and centre.