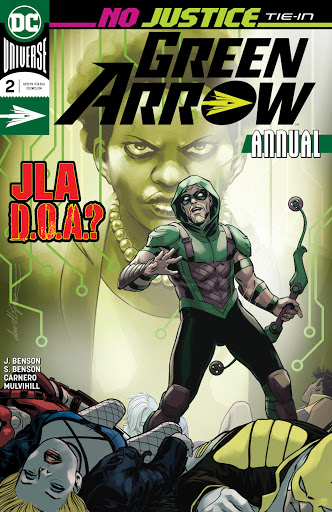 So there I was reading No Justice #4, planning a review, when I came across a panel including an editor’s note. 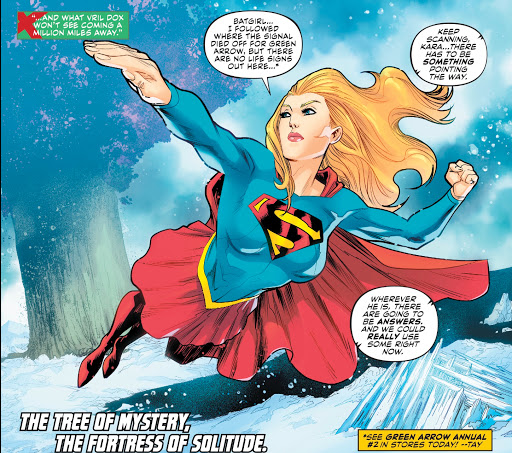 OK, if I need to read Green Arrow Annual #2 first, that’s what I shall do. And on the first page of that book, I find this box.

Oh dear, what to do. Is DC out to trap me in some insidious reviewer’s loop? May as well stick with Ollie rather than faff about with the old tablet.

As it happens, I made the right decision. Not just because a lot of this book is set prior to No Justice #1, but because this is a terrific comic deserving of some attention.

I’ve enjoyed a lot of recent Green Arrow stories but jumped off when things seemed to be heading a little too much in the direction of real-world politics. Call me an ostrich with his head in the sand but I get depressing news stories all day at work. Outside of that, I want my fiction with a heavy dose of escapism, meaning I’ve always been a bigger fan of Ollie Queen when he’s engaged in pure superheroics than when he’s tackling the horrors of Relevance. Green Arrow Annual #2 could not be a more superheroic take on the Emerald Archer; sure, he starts off fighting street level baddie Brick, but within the space of a few panels he sees this. 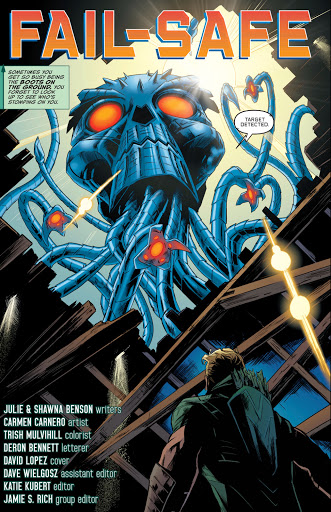 One of Brainiac’s trademark skull ships is hovering over Seattle, and Ollie soon finds out what it wants. 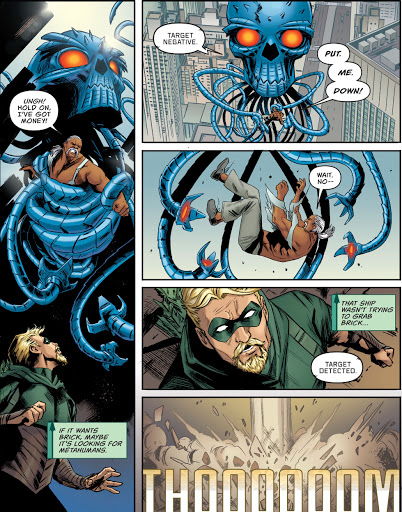 Cue a fantastic action sequence in which he uses a roulette wheel to provide a bit of stability while he’s up against the spaceship’s tentacles. And then he finds another use for the casino fixture. 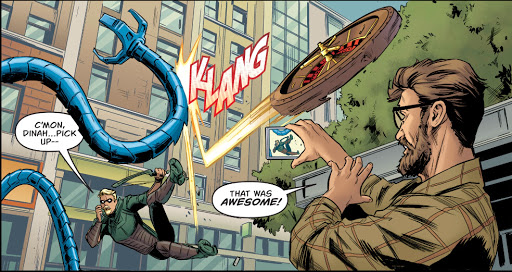 After an encounter with the world’s most annoying hipster - doesn’t a shared loved of moustache wax count for anything? - Ollie is contacted by Barbara Gordon. She says it’s Batgirl, but we’re definitely in Oracle territory, with the Ginger Genius delivering information and coordinating the troops. 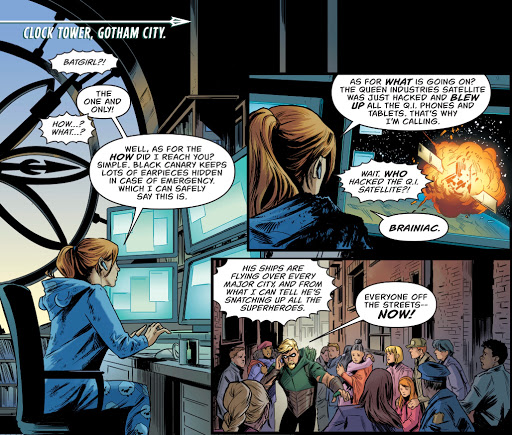 Unfortunately, right now, the troops consist of... she and Ollie. But they do have a lead as to who has more information on Brainiac’s attack and where the heck Earth’s other heroes are. Amanda Waller. If only Ollie had some way to get to her... 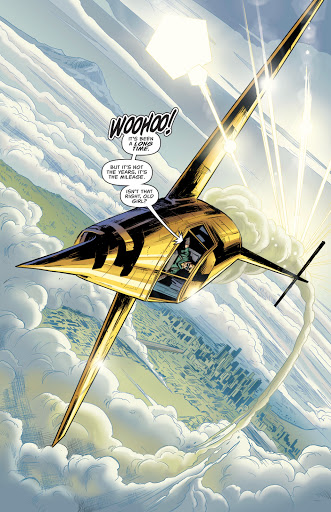 The Arrowplane. Now that took me by surprise - could Ollie get more superheroic than his Silver Age Batplane-alike?

As for what else happens this issue, buy the book - it’s not just a fine complement to No Justice, it’s a wonderful Green Arrow story, showcasing his skill, grit and intelligence. Having Oracle around is a bonus, this is Ollie’s show all the way. Whether he’s taking on a brace of Brainiac robots or walloping Waller (that gal’s no lady), Ollie is seriously impressive.

And that’s thank to writers Julie and Shawna Benson, just back from a tour of duty with the Birds of Prey. They wrote a few pages of Ollie over there, and he was right in character, but I’m still surprised by just how well they handle him here. The way he talks, how he thinks... It’s like they’ve been writing Green Arrow for years. I hope this is the first of many Ollie adventures they create.

As for the art, it’s totally to my taste - clearly laid out with crisp finishes, dynamic action sequences and splendid facial acting. And when this extra-length book affords the opportunity for a splash page or spread, Carmen Carnero grabs it and makes it sing. She’s also terrific with hair. Seriously, check out the dos on Ollie and Babs. Carnero has been popping up around DC for a while, on such titles as Detective Comics, Supergirl and Bombshells. Well DC, she’s ready for her series.

Carnero is lucky to have one of DC’s best colourists working with her, Trish Mulvihill, who never fails to capture the mood of the moment. And it’s a small point, but I appreciate that two editorial offices have worked together to the extent that Amanda Waller, both here and in No Justice - where the colours are handled by Hi-Fi - sports a spiffy pink parka. So well done to this book’s Dave Wielgosz, Katie Kubert and Jamie S Rich, and No Justice’s Andrea Shea, Rebecca Taylor and Marie Javins for those little touches that mean so much. And the stonking great set pieces! Letterer Deron Bennett also does a great job, his work being straightforward and pleasing to the eye.

David Lopez provides the cover and to my eyes it’s a winner.

As tie-in books go, this is one of DC’s best for years. It adds to the main story while doing something all its own, and giving us what every good Annual should - wow moments; I’ve mentioned the return of the Arrowplane, but believe me, that’s not the only one.

Whether you’re a regular Green Arrow reader, an occasional fan or a newbie intrigued by No Justice, I recommend this issue. To be cheesy, but sincere, it hits all its targets.