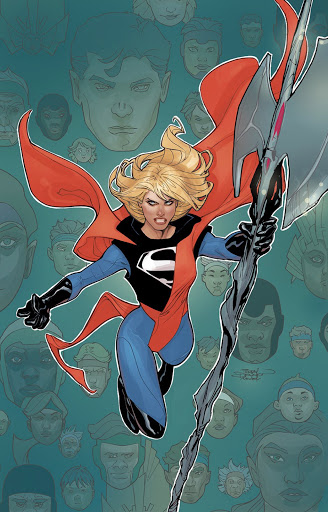 And sideways. And backwards. And forwards for a little while. Then backwards again... 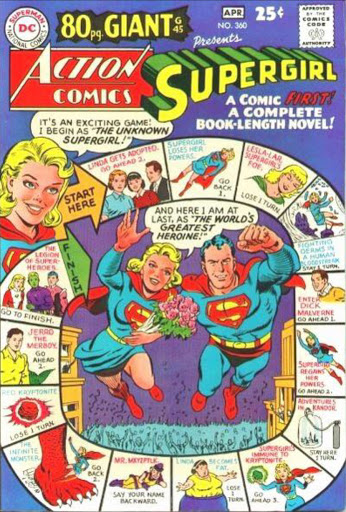 There’s a famous Action Comics cover that shows Supergirl’s journey from scared teenager to confident heroine in the form of a board game. If they redid that cover today, nothing could be more appropriate than a game of Snakes and Ladders (I believe it’s Chutes and Ladders in the US, which doesn’t sound nearly as much fun). Because every time Kara climbs to the top, she slides back down again, landing on the square marked Bold New Direction.

Today, the good news came that Supergirl’s comic wasn’t cancelled with #20. Kara will be back soon in the creative care of two excellent creators: Mark Andreyko, best known for his Manhunter series, and Kevin Maguire, whose work on Justice League helped made the series a massive hit. I enjoyed the recent work of Steve Orlando and Robson Rocha on Supergirl, but creators come and go - there are a world of opportunities out there, so it’s fair enough Kara passes into new hands. And I’m delighted that we’re not getting another new volume of Supergirl.

In an interview at Syfy Wire Andreyko says his run is set up by incoming Superman writer Brian Bendis’ Man of Steel mini-series, in which new villain Rogol Zaar claims to have been behind the destruction of Krypton: ‘This Supergirl book spins directly out of the events in Man of Steel, so the books are very complementary to each other. I’m following Brian’s lead, and he’s got a lot of epic stuff planned for Superman. And while the books are complementary to each other, you don’t have to read both to enjoy them, but if you do, you’ll enjoy the story more. The first year of the book is definitely tied in to things that are revealed during the Man of Steel miniseries.

‘The baseline story is very big. She’s trying to learn why he does what he does, where he comes from, and if there’s anyone else involved with him. It’s a detective story in space. She’s looking for answers to the questions that have been raised by Rogol Zaar. There will be familiar faces, some new faces, all sorts of challenges facing her, and also some potentially new supporting characters who will hopefully be well received and stick around for a while.’ 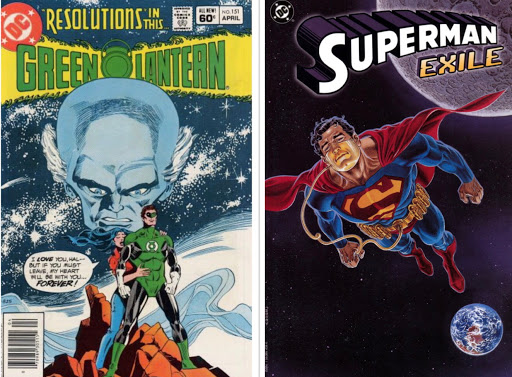 OK, fair enough, a year of Kara in space. On the one hand, why not? Hal Jordan did the ‘Exile’ bit, Superman too, why shouldn’t Kara have a similar right of passage. It’s never my favourite story engine - I like Earth to be the norm and space the exception - but Andreyko is a fine plotter who favours strong emotional character beats. I’m interested to see what he can do for Kara.

On the other hand, we have this quote from Andreyko about Kara: ‘She’s a fascinating character because technically she’s older than Clark. He was a baby when he came to Earth. She was already a teenager when Krypton got destroyed. Unlike Clark, who grew up around humans, she lost everyone she knew and loved. For her to come to Earth and take on the mantle of Supergirl as a way of qualifying herself as Superman’s cousin, there’s a lot of interesting mental and emotional ground to explore with Kara and finding her place in the universe. She’s dealing with a lot of stuff that she buried and was stirred up by Rogol Zaar’s appearance. The external journey of her going on this quest through space mimicks her internal, emotional journey in finding out who she is and where she fits in. Your characters always have to have an emotional journey. Otherwise, it’s like you’re just watching someone play a video game.’

Well, I wouldn’t want that. I’ve already expressed a preference for more old-fashioned fare. But Kara going on an emotional rollercoaster to learn who she is, where she fits in? Been there, done that. More than once. But let’s stick to the last couple of decades. We’ve had the Jeph Loeb Supergirl slowly moving from being a childlike, easily manipulated character to a fully rounded heroine, latterly under writer Sterling Gates. The New 52 brought us a new version of Kara, one who absolutely hated Earth but, after numerous trials - including an unpromising, but triumphant period as a Red Lantern - also emerged as a fully realised heroine. DC Rebirth kept the same version, but wound back her character development, making her seem younger, more confused. By the end of Orlando’s run, though, she knew who she was. Here’s the last page of #20. 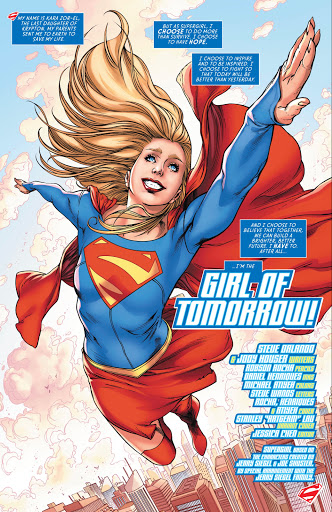 Does that seem like a person who needs to find themselves?

I realise that for a writer, figuring out a character is fascinating. But as a reader, I want to see what happens to Kara after this point. I want her to move forward - every time she approaches the level of maturity she had in the late Bronze Age, she’s wound back and must find herself all over again. Even when the Daring New Adventures of Supergirl series knocked a few years off her age she retained the maturity she’d earned over the previous quarter of a century.

But here we go again. For at least a year Kara’s Earth supporting cast is on the backburner; heck, they may wind up in comics limbo, as has happened so many times with Supergirl’s family and friends. Andreyko has the skill to sell Kara’s mission for Superman as a vital one; a guy claiming to have killed Krypton is obviously as much Supergirl’s problem as Superman’s... but at base, this sounds very much like Kara’s series is becoming an adjunct to Superman’s. It’s undeniable that so far as characters go, Kara is a derivative of Superman. But she’s long since earned the right to her own stories set in a world unique to her.

I’m not a fan of Bendis, but I am a fan of Superman, so the writer has a few issues to show me what he’s got. I’m a fan of Andreyko and Supergirl, so I’ll be supporting the book for awhile - if only to see why the heck she’s suddenly carrying an ugly great axe. I hate the idea as much as I abhor Wonder Woman whacking people with a sword - these are super-beings, they should not be resorting to vicious tools of war.

Ah yes, the new costumes. The hoodie variations, Andreyko tells Syfy, are temporary, and utilitarian, there to support her space activities. I don’t like all the black, but perhaps she’s undercover and has to blend in. Maybe the extremely peculiar crotch sash is there to fan out and hide an S-symbol she shouldn’t be seen with while undercover, but one she will never outright reject. We shall see. I much prefer the more traditional new look which, it seems reasonable to assume, will be her uniform going forward. 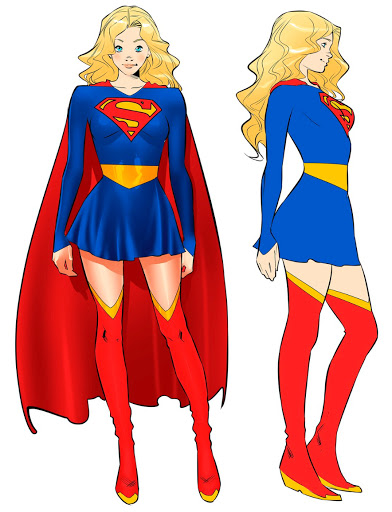 Apart from the yellow heels and toes, they’re an accent too far. I do like the idea that Kara will have different looks for different occasions, that takes me right back to the early Seventies when almost every issue of Adventure Comics would see Supergirl donning a reader-designed costume until, finally, one stuck. Boy, I’d love to see a contest to supply Kara with an outfit or two! 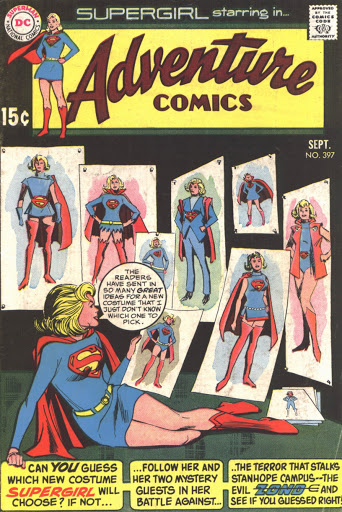 One thing I know is that with Kevin Maguire at the drawing board, Kara isn’t going to lack expression. Maguire made his reputation with his character ‘acting’ and I don’t doubt he’ll do right by Andreyko’s scripts. And who knows, once Kara gets back to Earth, Andreyko might pick up characters and subplots from the most recent run, and maybe even bring back Silver Banshee, Maxima and Michael from the New 52 issues. (But not Comet, he was rubbish.)

To sum up, I’m very glad the Supergirl series is returning, and that she’s going to be handled by two talented veterans.

I’m not thrilled that Kara’s going into space for an extended period, and I’m utterly dismayed at the idea she’s going to be - and I realise Andreyko never used the phrase - ‘finding herself’.

I like what looks like it’s going to be Kara’s regular outfit - if the axe never makes it behind this promotional art I will be very happy.

The idea of Supergirl as a soldier in Superman’s current war rather than an adventurer whose stories revolve solely around her dismays me; I know her original gig was as Superman’s ‘secret weapon’ but Supergirl very quickly won the right to make her own role.

My big problem is that Kara has yet another new direction, one which feels more about letting Brian Bendis pretend we’re in early John Byrne post-crisis days (see also the removal of Superman as family man) than it is about logically continuing the character’s own story.

What do you think?