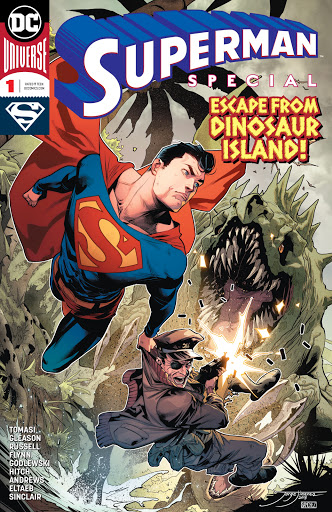 Jon Kent can’t sleep. There’s a wooden leg looking at him from across his bedroom, reminding him of a promise he and his father made. They’ve not broken it, but neither have they fulfilled it. Months ago, they were stranded on Dinosaur Island, a strange realm of monsters that may be in the past, or perhaps ‘just’ on another plane of existence. All Jon and Clark know is that it’s a long way away.

There, they met World War Two hero Captain Storm, last survivor of the elite fighting force known as The Losers. He sacrificed his own chance to get off the island to ensure Superman and Superboy could return to their home.

It’s time to go back for Captain Storm. The mad science cube that took them there has enough power for a return journey so off they go, determined to find Captain Storm. He’s not difficult to locate, as they arrive smack bang in the middle of a battle he’s having - with his lunch. 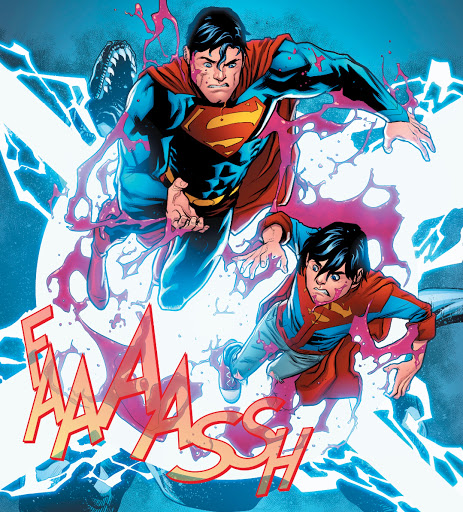 Bye-bye Mr T-Rex. After some rather colourful antics, they’re back in 2018 with Captain Storm, and helping him adjust to a life eight decades beyond the one he knew. And just as Jon and Clark had a mission, so does Captain Storm. 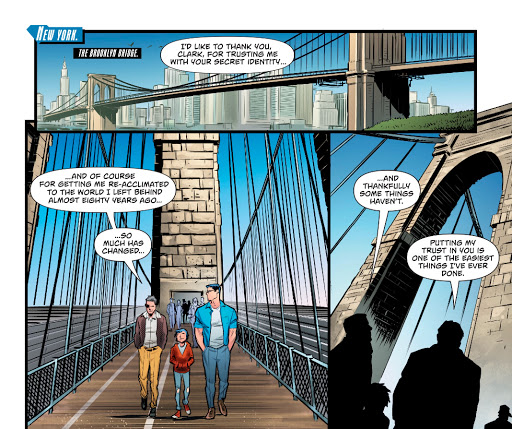 As a new era for Superman draws ever nearer, here’s one more outing for Peter J Tomasi and Patrick Gleason, the writers who have made Clark, Lois and Jon Kent their own these past two years. And a great final bow it’s is. You can’t beat a dinosaur fight, and it’s good to see Captain Storm isn’t left in limbo. He gets a few solo pages and they’re rather affecting. The easy friendship that develops between him, Clark and Jon is good to see - they’re all men of honour - and while Lois barely appears, she gets a lot of respect. The characterisation we’ve come to this expect is present, with this moment being a highlight. 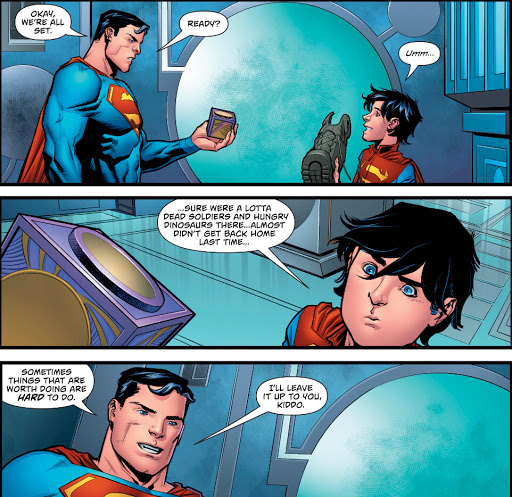 Despite instigating the mission, Jon is a little nervous about going back; it’s nice to be reminded that while he’s a brave wee soul, he’s still a kid and going to be nervous occasionally. Clark gives him the option of staying behind, but Jon has the heart of a hero, and a Dad who has his back. Of course he goes.

In an especially lovely touch, the final panels of the story are a nod and a super-wink to the most famous Superman era ending of all.

The art is by Scott Godlewski, who illustrated the Road Trip story last year, and just as that two-parter was about acknowledging tradition and remembering those who took a stand in building the United States, this one asks us to remember the fallen who fought to keep their world free. I can’t claim any insight, the title, lettered by the ever-excellent Rob Leigh and coloured by the talented Gabe Eltaeb, provided a rather large hint. 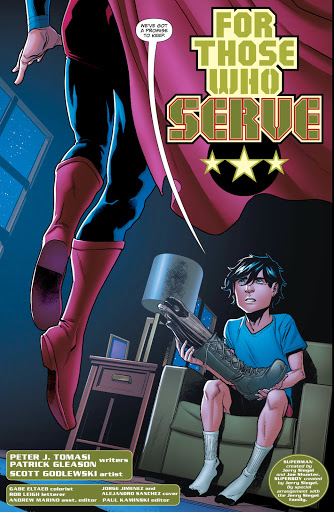 As for Godlewski’s art, it’s dynamic, the storytelling is fine and that’s one hunky Captain Storm. 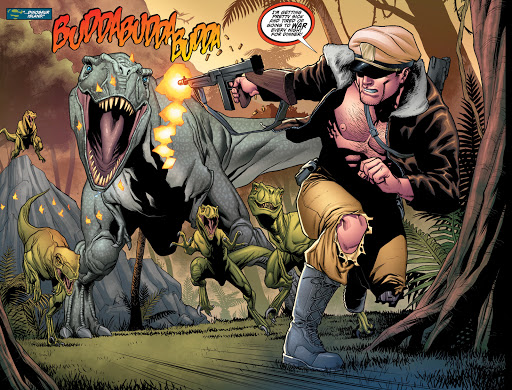 I bet a few hearts have been set a-flutter, but I won’t yearn for him to join the Suicide Squad or set up a modern-day Losers. Let the guy have his, if not happy, then bittersweet ending.

For Those Who Serve isn’t some leftover tale DC has slapped ‘Special’ on... it’s 30pp, ten more pages than a regular comic has to play with, and that ending is a very definite goodbye from Gleason, Tomasi and their collaborators.

This special also has a couple of shorts. Mark Russell and Bryan Hitch show us what happens when Superman, just back in Metropolis and rather knackered after a space journey, must immediately leap back into action. 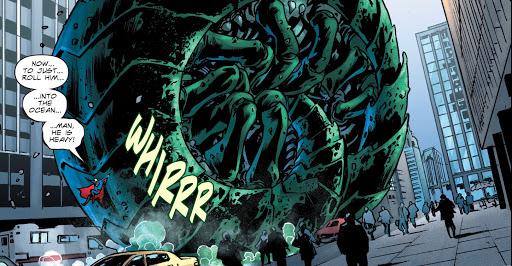 Bigger than the Atlantean insect is the problem he faces when a man he rescues from a collapsing building asks him to go back in for something. But when faced with the choice of saving a pet, or some precious photographs, there’s no dilemma.

I’ve an aversion to flashbacks showing us the wisdom of Pa Kent - it’s become as much the modern Superman cliche as angry heat vision eyes - but Russell keeps the callbacks small and focused, and sentimentality at bay. Hitch, with his love of big moments, is the perfect choice for Strays and Strangers, but he also gets to remind us that he’s better than most at facial expressions. And Alex Sinclair’s naturalistic colours suit a tale that marries big action with real intimacy.

The final tale surprised me with its focus on former Superwoman supporting character Atomic Skull, but he did start out as a Superman villain in the Seventies. Now a probationary member of the Metropolis Special Crimes Unit, his history with our hero informs a sharp short that manages to surprise. As far as I can see, this is writer Ian Flynn’s first DC comics script - though he looks to be involved with a new DCU video game - but he’s written about a million Sonic the Hedgehog comics so knows how to put together a neat story in just a few pages. I hope this is the beginning of a beautiful friendship with DC, because right off the bat, Flynn shows that he gets Superman, Atomic Skull and SCU chief Maggie Sawyer. 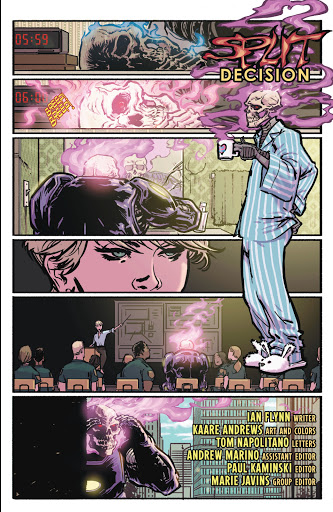 The art’s a treat too, as Kaare Andrews provide full-colour illustrations that are full of personality - just look at hapless Albert Michaels scratching his atomic arse on the first page. In his bunny slippers.

This issue’s cover is by Jorge Jimenez, whose time with the Super Sons has seen him rise to stardom - he’s drawing the Justice League relaunch - and it’s another winner, the figures totally popping out of the image. Colourist Alejandro Sanchez deserves kudos for his part.

I don’t know how I’ll feel about the coming Superman stories as former Marvel writer Brian Michael Bendis takes creative control. If I don’t find them to my taste, well, I’ve two fantastic years of stories helmed by Gleason and Tomasi, drawn by such excellent artists as Gleason, Doug Mahnke and, of course, Godlowski and overseen by editors Paul Kaminski and Andrew Marino to look back on and enjoy all over again.

And this is the perfect capper, with each story focusing on one aspect of our hero’s character: the importance he places on keeping a promise, how compassion informs his judgement and how he gives everyone a chance to find their best self. That’s Superman.

Thanks guys, don’t be gone too long.