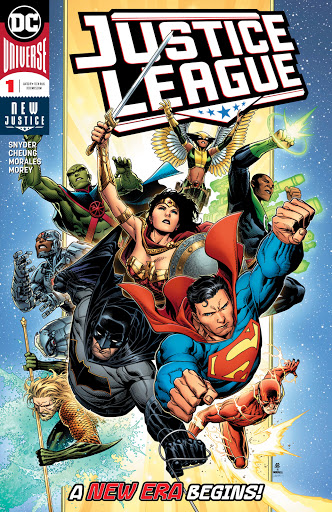 There’s a new Justice League in town. Not just in town, but all across the planet. This League seems unlimited in terms of numbers, with a core membership - J’onn J’onzz, Wonder Woman, Hawkwoman, Aquaman, Batman, Green Lantern, Cyborg, Superman and Flash - supplemented by dozens of heroes. Green Arrow, Swamp Thing, Adam Strange, Hawkman... heck, it doesn’t matter if you’re already in a team, like the members of the Terrifics, when the JLA calls, you come running. Or flying, swimming, whatever. 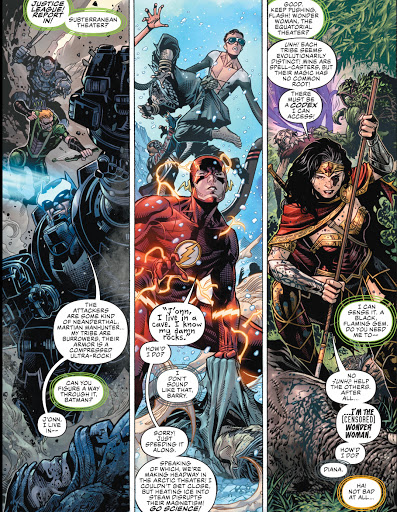 So it is that this issue’s action sees the League fighting Neanderthals across the planet. And where there are Neanderthals, there’s going to be Vandal Savage, the Immortal Villain. A member of the original Injustice Society of the World, back in the Second World War, he’s formed a new Injustice Gang. And someone’s not impressed. 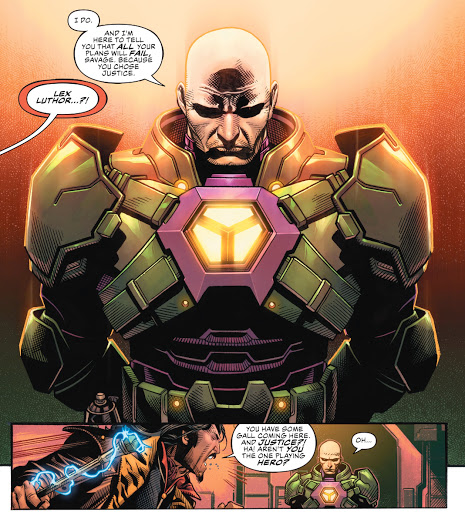 Meanwhile, the Justice League has something bigger than rampaging Neanderthals to occupy their minds. 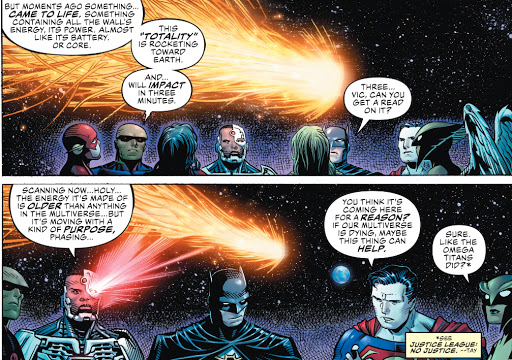 They have three minutes to decide if this leakage given form from the broken Source Wall is likely to end all life, or coming to solve some cosmic mystery...

No one could accuse writer Scott Snyder of not thinking big with his first Justice League issue. A threat to conquer the planet is met, but then the heroes are faced with something that may smash the globe to smithereens. Meanwhile we have a cracking confrontation between two of the most impressive villains in the DC Universe with more in common than might first seem evident - John Byrne’s post-Crisis Lex Luthor revamp borrowed heavily from Marv Wolfman’s version of Vandal Savage as urban caveman. There’s a heartbreaking flashback to life - and death - on Mars. We get a quick tour of how the Source Wall being - the Totality - is viewed across time and space. And best of all?

A look at the League’s all-new Hall of Justice.

A limited tour of a superhero base better than massive cosmic action and cool characterisation? Well, yeah. I’m a massive sucker for the legacy of the DC superhero universe and in just a few panels Snyder gives a sense of the sweep of League history. The fact that it seems we’re firmly in a pre-Flashpoint version of the world only makes it better. Snyder has really thought through how a public superhero mission would work, with the decommissioned trophies and secret spaces. And there’s a deftness to the writing that’s very appealing. The bit about ‘a calcite from the Butterfly Nebula’, for example, evokes Grant Morrison’s All-Star Superman, with its nods to the Silver Age wonders of the Fortress of Solitude. And how wonderful to see little kids inspired to pay superheroes. Then there’s that direct invitation to the reader, like something out of an old DC mystery book; a little playfulness goes a long way.

You’ll notice the creator credits in there - it’s quite the team, with the real coup being grabbing penciller Jim Cheung from his usual bolthole at Marvel Comics. Credit to editors Rebecca Taylor, Andrew Marino and Marie Javins for pairing Cheung with inker Mark Morales and colourist Tomeu Morey, because the result is terrific. The visuals are crisp, open, inviting, as opposed to the treatment Cheung’s work received over at Marvel 2 in One last week, where the pages are dark and murky. Cheung isn’t known for long runs on books but I hope he hangs around DC awhile, because he immediately seems at home drawing its biggest heroes and villains.

Kudos, too, to letterer Tom Napolitano for good, clean calligraphy, and colourist Laura Martin, who teams with Cheung to provide a cover image full of dynamism and depth. And that’s a great new logo too, everything pops nicely.

I’m not a huge fan of DC’s cosmic side but this issue works beautifully. The initially promising Dark Knights: Metal event quickly became cluttered by multiple Batman amalgams wittering away in word balloons that were unreadable without double tapping a tablet screen to enlarge, but here the story is tighter, more chilled and so more enjoyable. The heroes treat situations with due seriousness but are confident enough in themselves and their team to relax and have fun - the multiple impersonations of Batman make for some nice, natural comedy, for example. OK, there’s potential for things to get completely out of hand as we go on, but I trust Snyder; he always sold Metal as a huge, loony event, and that’s what we got. Talking about the new League, he seems to be all about coming up with a modern equivalent to the satellite glory years. And I strongly suspect he’ll succeed.

But that’s about it. Every page drips with imagination and personality, and boy, does it look great. So, Mr Snyder, how soon can we have an annual?