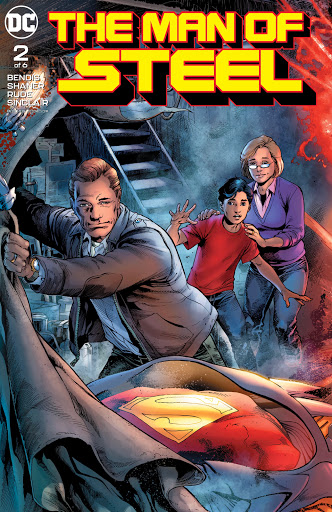 Guardian of the Universe Appa Ali Apsa is visited by another member of the Galactic Circle, Lord Gadelo, ruler of 42 star systems. He’s not happy. 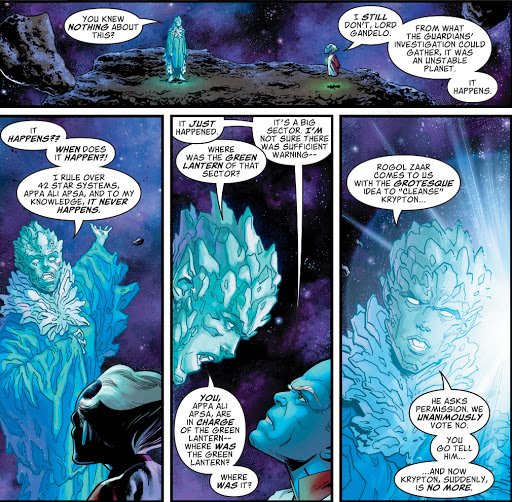 He doesn’t trust the Guardian, but he’s wrong. After Lord Gandelo disappears in a huff of smoke, Triple A visits the hell planet where Rogol Zaar, the beast man who demanded permission to destroy Krypton, was last seen. He’s not around. The Guardian prays that he died along with Krypton. 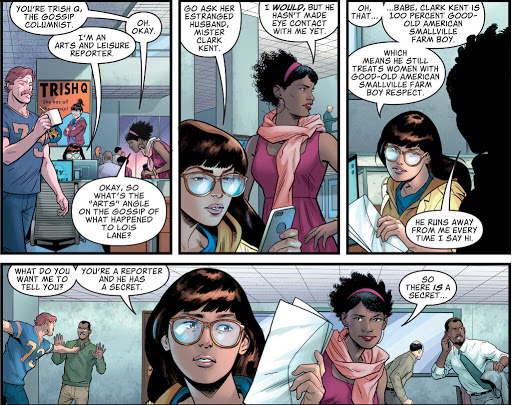 Over in Coast City, meanwhile, Superman is keeping busy. 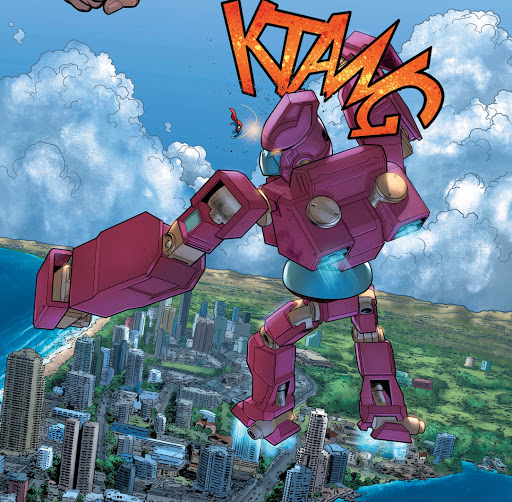 The kid’s wet dream robot is being controlled by - who else? - the Toyman. And while he doesn’t arrive in time to help take down the missing-from-Metropolis villain, Green Lantern is pleased to bump into his old pal. 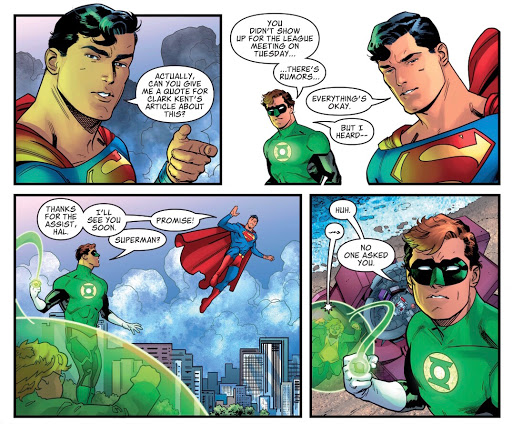 Superman’s thoughts turn to recent days, when a manifestation in their apartment led wife Lois and son Jon to go missing from his life. 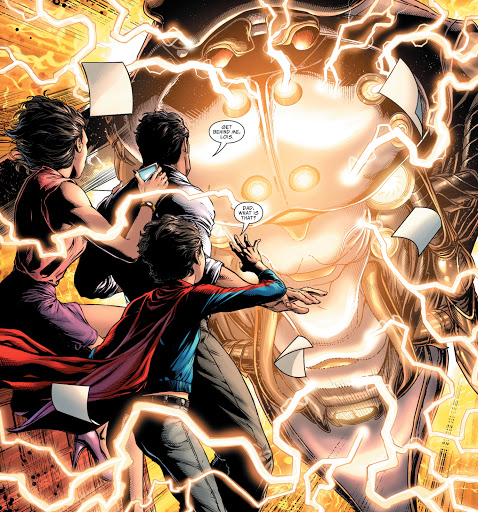 The memory prompts Superman to really express his feelings. 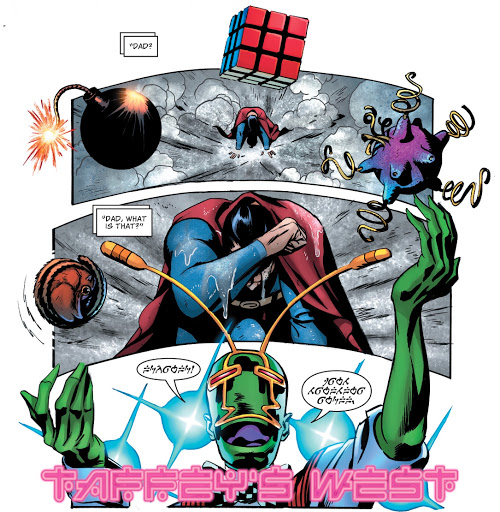 Over in the Vega system, a loose-lipped barkeep alerts Rogol Zaar to the survival of at least one Kryptonian. 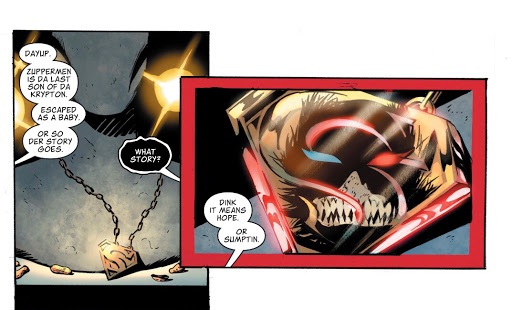 And on Earth, its greatest hero is having regrets. 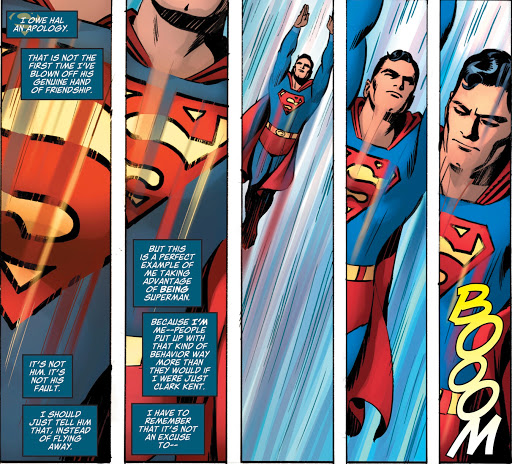 He doesn’t have time to feel bad for long, though, as people need him. Another building has been set on fire.

Finally, Clark appears at the Daily Planet, where Perry is having a bad day. And Trish Q turns out to be a lot more interested in the Lois business than she made out to Goode. 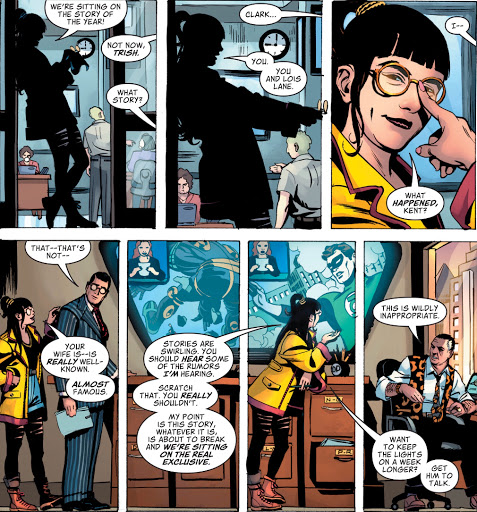 I enjoyed Brian Bendis’s first full-length Superman tale; I love the second. His characterisation of the Man of Steel is nicely nuanced, as we see the front he’s putting on and that he’s actually dying inside. The Daily Planet scenes are excellent, and the bit with Triple A and Lord Gadelo go some way towards making Rogol Zaar - still the story element in which I’m least interested - feel like a threat. I don’t think the transition between Superman’s despair and the space bar quite works, though; it’s visually arresting but the juggling Ambush Bug simply detracts from what could otherwise be a very powerful moment.

If I had to pick a favourite part of the book, it’d be the newspaper scenes. Perry’s fears ring true, the gossiping reporters, likewise, and I love that for one second Bendis has me thinking Perry had forgotten his grammar. New characters Robinson and Trish are enjoyable, but the former - whom we know to be a spy for some sleazy type - can’t be as smart as she thinks she is if she’s going to pump the gossip queen so openly... already Trish notices she hasn’t got a reporter’s instincts. As for Trish, even in this world of tittle tattle, her hard news instincts need retuning if she thinks the personal life of an ‘almost famous’ hack is going to translate into big sales. And you do not question Perry White’s news nous.

Good on Trish, though, for being the first Planet reporter outside Perry’s golden circle of Clark, Lois and Jimmy to verbalise the frustration colleagues must feel towards them. 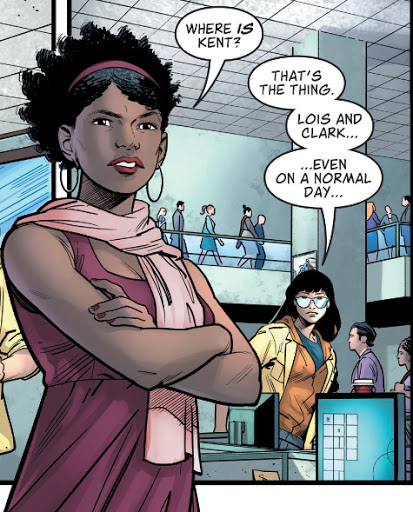 It’s great to see Toyman again, though it’s weird to have him suddenly sounding like an episode of Seinfeld. Will this new dialogue pattern ‘schtick’?

This issue has three artists. Three superb artists. A consistent look in the eventual collection would be grand, but if we can’t have that I’ll take Evan Shaner, Jason Fabok and Steve Rude anytime. Shaner’s clean, sincere lines are perfect for a hero as pure as Superman, Fabok’s Gary Frank quality grounds the freaky two pages with the giant head (reminds me of Validus from the Legion of Super-Heroes), and Steve Rude provides a page that just yells instant classic. 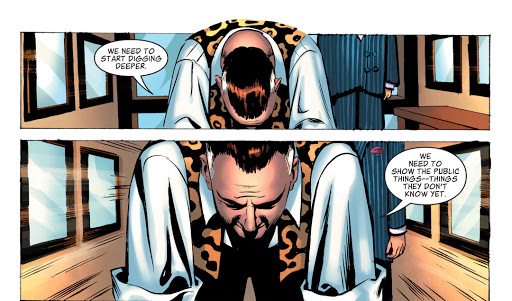 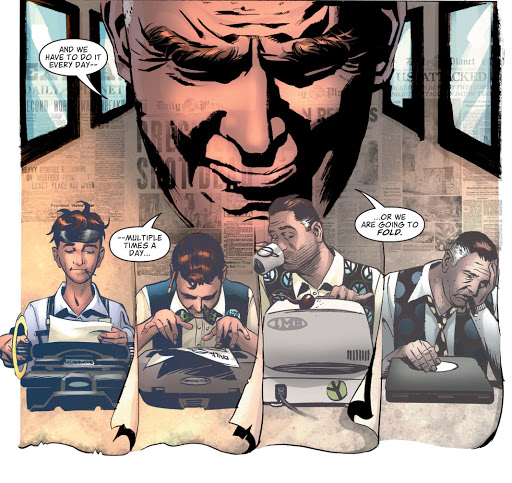 Shaner deserves extra praise for his packed Planet, and there’s a cute little background story with Steve Lombard and Ron Troupe that brings a smile to my face. Little details like a silhouetted cyclist watching the robot fight and Coast City workers cheering the novelty of Superman add verisimilitude, and his Hal Jordan is a delightful callback to Dave Gibbon’s late Bronze Age version

I also like the snazzy Forties stylings Rude gives Clark and Perry, contrasting with the very Today wardrobe of Trish, and the smudginess of Superman as Bendis delivers that great insight about people giving him extra slack.

The cover by penciller Ivan Reis, inker Joe Prado and colourist Alex Sinclair is handsome, but dull - oh for a Shaner Superman vs giant robot... Sinclair also colours the interior, and very nicely too, while Josh Reed supplies the sharp lettering.

This time next week I’ll be on holiday, with little access to WiFi - if I can’t download Man of Steel #3, expect to find me in a crater, wailing...