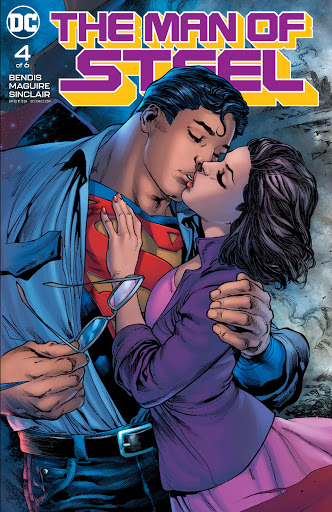 Superman and Supergirl are fighting mad. They’re face to face with the creature who destroyed Kandor and while their instincts are to pummel him, the alien brute has chosen Metropolis as the battleground, meaning every blow thrown puts lives at risk. 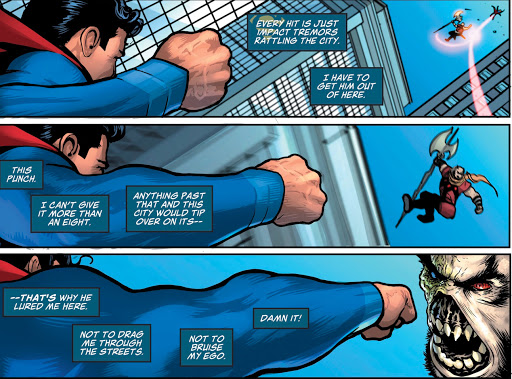 While the monster whose name he doesn’t know is caught up with Kara, Superman takes a few seconds to assess the situation. 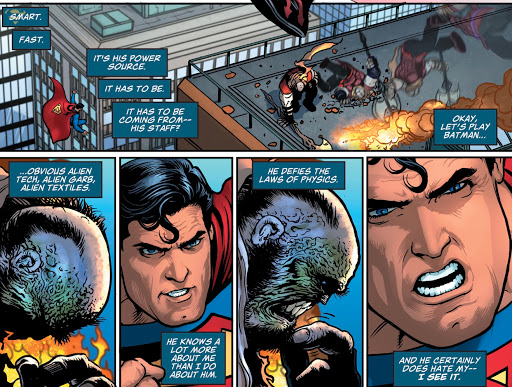 Before Superman can properly parlay his greater knowledge of the power-giving properties of Earth’s yellow sun, though, his opponent goes into hiding. Green Lantern arrives on the scene, keen to help.

And there’s more. Lots more in the best issue yet of what has been a much stronger mini-series than I expected. Once more, new writer Brian Michael Bendis proves he gets Superman, whether it’s our hero numbering his punches, rating them for likely effectiveness, or using that formidable mind to ‘play Batman’.

And it’s great to see Superman’s constant concern for the public in a chapter that fits nicely with Bendis’s pages in Action Comics #1000. Two people he doesn’t consciously think about are wife Lois and son Jon - I suspect he’s trying to keep them at bay as he can’t currently do anything about whatever their situation is, and right now he can’t afford to be distracted by his emotions. But as the most important part of his world, of course they impinge upon his thoughts, meaning we finally get to see who appeared in the Kent apartment, presaging Lois and Jon’s absence from Clark’s life. 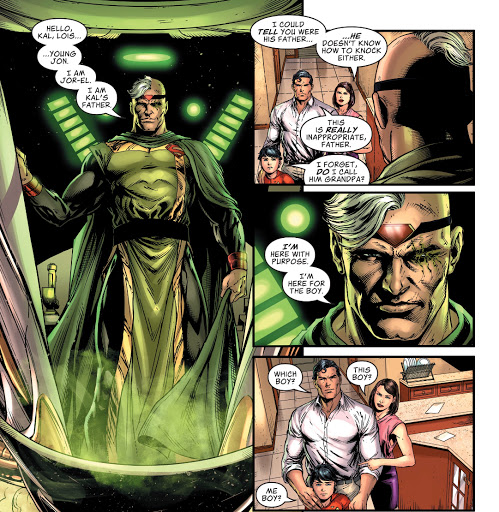 Oh, that guy. All right, I hated the Mr Oz arc in Action Comics, but as the situation with Jor-El was never resolved there, and this storyline turns on the claim that villain Rogor Zaal murdered Krypton, it makes sense for him to show up. And if he’s taken away Lois and Jon for awhile, fine, he’s not about to hurt them; I can relax a little and look forward to their return. Mind, I’m not sure what to make of his apparently having forgotten he’s met Lois and Jon previously, or Lois also acting as if it’s their first encounter. Only Jon has his memory intact.

Supergirl doesn’t have much to do this time, but she’s around, presented as Superman’s trusted equal, and that I love. Perry and Jimmy are present to see the big fight, and on good form. New reporter Robinson Goode, a spy at the Planet, doesn’t even try not to be annoying.

It’s interesting that Rogol Zaar doesn’t say a word during the fight, as if Bendis is having fun with his reputation for chatty villains. But when the alien does speak...

And like most of this issue - Jason Fabok draws the Lois and Jon interlude, as ever, and does a tiptop job - it’s a moment wonderfully illustrated by Kevin Maguire, who brings his trademark mastery of emotions to a story that demands it. The last few pages are especially strong, so far as helping us into Superman’s head is concerned. I’m not a fan of wordless tales, but if Bendis had scripted a silent issue, putting poor old letterer Josh Reed out of work, Maguire could have sold it to me. There’s a nice pair of bookend splash pages mirroring one another, coloured with class by Alex Sinclair. It all bodes very well for Maguire’s upcoming work on the Supergirl series.

This chapter does seem to end with the return of my least-favourite super-power but if Superman has indeed resorted to that, next week’s continuation is going to see him in a massive pickle. Excellent, let’s keep the stakes high, making Superman’s inevitable triumph all the sweeter.

Once again, the cover is evocative more of Superman’s life story than a particular chapter, but I never tire of seeing he and Lois happy, and it’s a gorgeous image by Ivan Reis, Joe Prado and Sinclair.

I’m enjoying this mini-series hugely, for its balance of action and character moments. I’m hoping for a satisfying wrap-up of the Rogol Zaar plotline, which we know acts as a springboard for the new Supergirl run. As for what’s next for Clark and co, I can’t wait to find out.