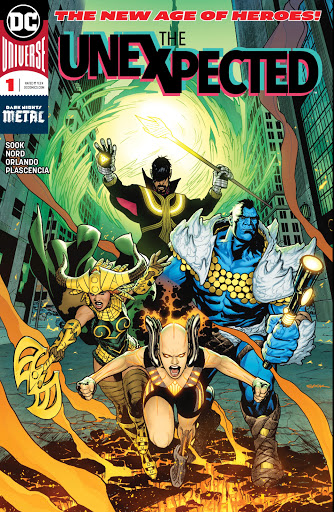 In Mammoth City, the metahuman Firebrand is beating up Killer Croc. She doesn’t pick fights, but she’s grateful for them, having been brought back to life after the Dark Knights: Metal event got her killed.

As pacemakers go, the Conflict Engine is a bummer. A former paramedic, Firebrand - real name Janet Fals - volunteers under an assumed name at the local Veteran’s (sic) Hospital. And that’s where the dimension-hopping psycho who calls himself Bad Samaritan finds her. 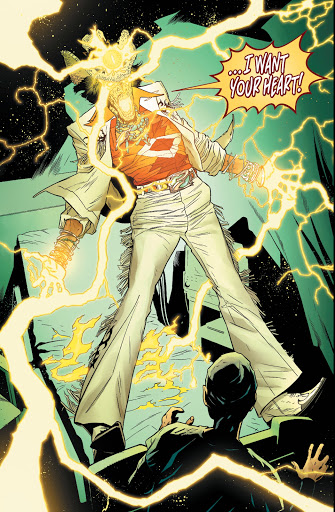 He wants to rip out her heart, take it back to Thanagar as part of a deal to quieten his own body horror demons. But he’s not going to find gutting Firebrand easy - and not just because she’s quite the combatant. 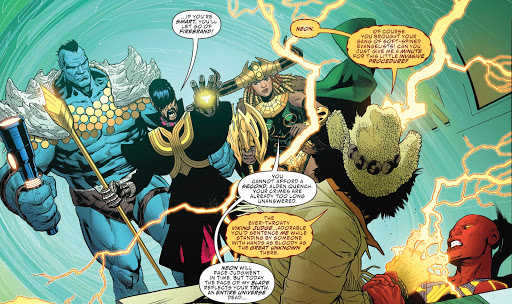 Neon the Unknown, the Viking Judge and Ascendant know Bad Samaritan has just killed one of the Multiverse’s infinite earths, and aim to put him down...

This is the busiest of first issues, as writer Steve Orlando mines the recent Metal event for ideas. And that’s the big negative of a great-looking debut that doesn’t lack for excitement. A team of freaks traversing the Multiverse, that’s an interesting idea, but throw in Barbatos, the World Forge and Hawkman as galumphing great chicken and I just want to find a nice back issue of Binky. We already have a bunch of new characters to process - as well as Firebrand, who arrives with a useful infodump, there’s Neon the Unknown/Annoyingly Haired, who, like Janet, is named for a Golden Age hero. There’s the Viking Judge, an immortal warrior who was showcased in a recent issue of Supergirl. And Ascendant, who’s big and blue and has a magic torch... or something. Think Loose Cannon in spangles.

I dunno. The action moves at such a breathless pace that Orlando doesn’t pause to give much detail. What I know of the characters I’ve gotten from a DC article, but it’d be nice to have some of that here. I’d find Neon less annoying visually, possibly, had I known the deal with his hair (hiding scarred eyes, and he’s blind, so he doesn’t need to see past his dangly locks). And the colours that form him are linked to him being an artist. I realise it’s fashionable to start a story in media res and explain things along the way but dang, I’m old fashioned, I like roll calls, I want to be told powers and backgrounds as soon as possible. Sound and fury can only carry a book so far.

Maybe each issue will focus on one character - certainly Firebrand’s spotlight got me interested in her - is unseen brother Jared Janet’s twin? Does she ever look for fights? Will she ever have dinner with the excellent Nurse Joy? One thing I don’t like is her facial similarity to the most recent Red Tornado, and her costume design recalls hi-vis cycling kit. The other guys look more appealing (bad hair apart). In fact, the art is pretty stupendous throughout. I couldn’t tell you which pages are pencilled by Cary Nord and which are the work of Ryan Sook because the credits don’t give breakdowns. I think it’s mainly Nord and inker Mick Gray, with Sook and Wade Von Grawbadger taking over from page 15 - feel free to put me right. All the colours are by FC Plascencia and lettering by Carlos M Mangual and they do a great job, heck, the title and credit box alone are a neon-toned delight.

I can’t see an immediate link between this Bad Samaritan and the old Outsiders villain, though he’s likely a multiverse alternate. He’s certainly bad, as we see he’s killed a TV version of a DC favourite, along with her world, and visually he’s distinctive, like Wolverine crossed with a burning Hunter S Thompson. Can we call him BS? Probably not.

The creators on this comic are first rate. They look to have a good idea of what they want to do. And yet I closed the issue feeling rather flat. Part of the problem may be the ‘artists first’ approach of DC’s New Age of Heroes line, with big, bold images - read ‘fights’ - taking precedence over narrative. I’ll be back to try the second issue, because Steve Orlando has impressed and entertained me on the likes of Supergirl and Midnighter, but if this series turns out to be a love letter to Metal, I shall wish it the very best and go off in search of Binky. Earth 1968, I think...