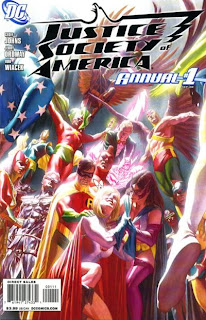 Now here's a fanboy's wet dream. Well, an old fanboy's - I can't see readers under 30 being as excited as I was at the prospect of Power Girl's return to Earth 2. As a very pre-Crisis reader, the idea of DC's Golden Age Earth having survived, and moved in on Peege's absence, was thrilling.

But boy, do I have mixed feelings about this, as it further muddies DC's post-Crisis, post-Infinite Crisis continuity. How I'd love to be able to enjoy the line of DC superstars without constantly wondering what history counts this week, and for how long.

That aside, it was fair intriguing to see Peege apparently reunited with the original Huntress, Helena Wayne, and other members of the JSA and Infinity Inc, here fully incorporated as Justice Society Infinity. Plus, it's a much-needed breather from the ongoing (and ongoing, and ongoing) Gog storyline in the monthly title.

Peege and the JSA are equally confused by her appearance among them but one area which always focuses the Last (But One) Daughter of Krypton's mind is action. Thus, she joins Huntress on a sortie to sort out the Joker, once and for all. Helena has good reason to finally decide to wipe the smile off the Clown Prince of Crime's face, as his twisted acts continue to hit close to home. Exactly what he's done sets up a nice moment of characterisation for Helena, and the confrontation between Dark Knight Daughter and her family's greatest enemy is wonderful. The Joker here, despite age and infirmity, is far creepier than the much lauded silver screen turn by Heath Ledger.

The team-up sets Peege on the way to feeling that, yes, she is home after all; that's when writer Geoff Johns throws a neat spanner in the works, confirming that all isn't as straightforward as it seems.

And here's my major gripe with this issue - whoever okayed the ad placement needs a slap. Not one, but two big reveals are scuppered by a flatplan that's dumped two significant splashes on right hand pages, opposite story rather than ad. You turn the page and see the surprise, prior to finishing the scene leading up to it - it's maddening.

And that's a shame, when it's so rare to find a clever moment in a book that's not been previewed to death. Luckily, this book had lots of other clever moments - clues that Gog's gift is ambiguous, to say the least; pleasing ties to the Huntress's solo strip in Wonder Woman back in the day; and Kara explaining her life on post-Crisis, then New Earth.

And the art is a blast. Infinity Inc and All-Star Squadron alumnus Jerry Ordway's work is beautiful here - it's a travesty that editors aren't begging him to sign an exclusive. Storytelling, figurework, body language, facial expressions . . . Ordway's pencils have it all. And they're lovingly embellished by fellow veteran Bob Wiacek, another guy we need to see more of.

Alex Ross's cover is impressive, but doesn't jump from the shelves, being lovely and ethereal without being grabby - Peege and pals look like they're in heaven, but the image is muted and crowded.

The lovely surprise this issue was a fabulous team poster - the regular team, not the 'Earth 2' people - that reminds us that the modern JSA are a group of regular folk with costumes and powers, not simply the icons many can be seen as. They're a group with personality.

I wish this issue had been truly standalone, a satisfying moment away before Peege is folded back into the main story. It's not, giving the Gog storyline further chance to ramble on, but nevertheless, this is a fine first annual.
Dale Eaglesham Geoff Johns; Jerry Ordway Justice Society of America Annual 1