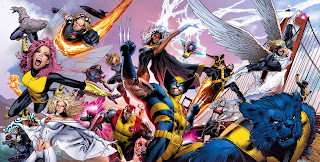 Can a comic be too pretty? It seems so. This anniversary issue features the artwork of Terry & Rachel Dodson and Greg Land & Jay Leisten. It's gorgeous, especially in the case of Land and Leisten - characters have perfect skin, beautiful smiles, angelic grace . . . but little life, no real dynamism. Whether we're watching the made-up Mayor of San Francisco tour the new X-HQ or our once more merry mutants battle for their lives, everything looks so damn nice that I wasn't drawn into the story. I stopped to gaze at every panel, wishing to step into this luscious world.

When Magneto finally showed up to cause trouble in San Francisco I didn't believe it. For page after page, I was expecting to learn we were in some Emma Frost mindscape, or Danger Room scenario.

There's more movement in the Dodson's sequences, but again, the sheer loveliness of the characters was distracting - even the Sentinels look like GQ models. And would-be clever chapter headings constantly obstructed the narrative flow.

As for the story, writers Ed Brubaker and Matt Fraction come up with a clever way to take a trip through Memory/Greymalkin Lane, a mutant pageant to mark an artist's latest installation - a leftover Sentinel. Knowing it's only a matter of time - minutes, as it turns out - until the giant robot poses a new threat to mutantkind, Cyclops and co suit up and mingle with the motley mob. And when the old master of magnetism joins the throng, it's a nice reminder of the X-Men's first battle with him, in issue 1. The magnetic effects by Land, Leisten and colourist Julian Ponsor are superb, whether I believed it was the real guy or not.

But it seems it is, and the sequence leads into a new plotline featuring a Marvel character who has played both sides of the line in his day. I may stick around to see where it goes, if only to enjoy Brubaker or Fraction's marvelously grandiose Magneto dialogue. Lines such as 'You play king of the mountain, boy. Boss around the dregs of a dying race and suckle on the teat of those that would see you driven before them' should surely have mopped up any doubt I had that this was the real deal.

I may also come back to see how come Fred Dukes, the Blob, is turning Japanese - has he really been Psylocked? And where do people's faces go when Greg Land pulls back his artistic camera? And, next time the mayor says the view from X-HQ is the best she's seen of SF Bay, will anyone deign to show the reader?

One thing I do know is that the Big Mutant Moment this issue will come back to bite the X-Men on the bum - a psychic declaration to all homo superior folk that henceforth SF will be their haven. In comics terms, SF has just had a great big target painted on it - Damage Control might as well open a branch there right now.

My favourite moment this issue was an understated demonstration of how hardcore the Angel is, and it was needed after an earlier scene that had me thinking Warren Worthington was about to move to the Castro.

What the book lacked was an explanation of the Dreaming Celestial - I must have missed that one plonking down in SF. Letting that hang around is as stupid as the mayor allowing Sentinels to be used as artwork, but that way conflict lies, and that's what comics need if they're going to get to 500. Happy Birthday X-Men.
Greg Land Jay Leisten Terry and Rachel Dodson Uncanny X-Men 500