The Brave and the Bold 16 review 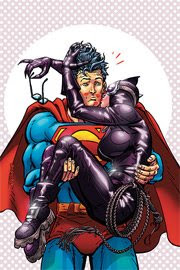 A few years ago, Superman answers the bat signal, covering for his out of town pal. He's soon teamed up with Catwoman to stop the underworld auction of 'a map to some hidden cave just outside the city'. Ulp.

That's the set-up for a truly delightful issue of one of the best superhero books on the stands. It pairs two heroes I've never seen work together, and just lets their characters bounce off one another - Superman, the straight arrow; Catwoman, the wily minx. Sparks fly as Superman tries to deflect the attentions of Selina, who is suddenly wondering if she should give up on the bad boys ('It's not like I'm going to break him. Despite my very best efforts. Mmmm.')

There are surprises galore in Mark Waid's clever script, with plenty of drama and comic scenes that arise from character rather than contrivance. The best of these sees Catwoman helping Superman with an undercover design . . .

Meanwhile Scott Kolins - in the first foray to Gotham I can recall him making - provides beautiful artwork, from the playful cover to the final page; Gotham has more character than at any time since the days of Anton Furst's design, Selina tumbles gracefully over the rooftops, Superman's powers are shown in novel ways . . .

An extra level of vibrancy is added by Rob Schwager's colours, while Rob Leigh's letters are spot-on. The team is coordinated by editor Joey Cavalieri, one of DC's strongest. I just hope he's staying on the book with the pending arrival of J Michael Straczynski, whose writing can get a tad pedestrian at times.

Still, that's a worry for another time. For now, here's a great example of how good a comic can be without being tied to a crossover event - Superman and Catwoman had me purring with pleasure.
Catwoman Mark Waid Scott Kolins Superman The Brave and the Bold 16 review