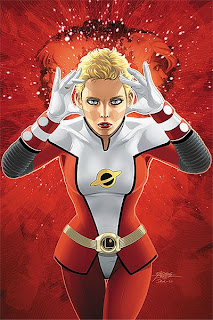 As a massive fan of the Legion, it's safe to say I've been looking forward to the continuation of this Final Crisis semi-tie-in. And it doesn't disappoint, being a fast-moving romp across the 31st century in the company of colourful, powerful heroes and villains.

It does take awhile to get the Legions of three continuities together - after the end of last issue, I was hoping for a speedy gathering - but there's plenty going on before that. Gasp at the courage of Rond Vidar. Marvel at the passion of Cosmic Boy. Applaud the Legion spirit of Polar Boy. Laugh at the unconditioned hair of White Witch.

Finally, when the teams do unite, we get possibly the funniest scene of the month as three Brainiac 5's match wits:

And so on. It's a much-needed moment of levity as apocalypse approaches. I also laughed at Superboy-Prime daring to accuse someone else of being a whiner.

In a comic book full of great scenes, I was disappointed that Superman doesn't actually have a clue as to how he'll 'redeem' Superman Prime. All he has is a dim hope that he'll see the error of his ways - little things such as mass murder and this issue's killing of a Legionnaire - and turn himself in. Much as I hate the modern trend for heroes effing and blinding, I don't blame Lightning Lad for his liberal use of $!*?&. Superman came across as a tool, and not a useful one.

I was also underwhelmed at the last page reveal of some big help for the Legions -one of Geoff Johns' pet GL characters. The Lanterns had their moment in the sun last year, whereas this is a Legion event in their 50th anniversary year. The legend of the Green Lanterns has been polished, it's the Legion who needs the spotlight now.

I was whelmed - if that's not a word, it should be - by the artwork of George Perez and Scott Koblish. They give us even more characters than last month, several of them in new costumes. Happily. Perez's mastery of composition and pacing means the story always flows smoothly. And there are some wonderful individual shots, such as the moment he actually makes Mordru intimidating (now that's magic!) and the coolest use of Dawnstar's wings ever.

Despite my quibbles, this series is living up to its billing as a blockbuster, giving us huge events crafted by top creators at peak form. Yes, I have the odd quibble, but that's bound to be the case in a story this ambitious. Legion of Three Worlds isn't perfect, but it's sure as heck better than 95 per cent of the superhero comics out there. Long Live the Legion!
Final Crisis: Legion of Three Worlds 2 review Geoff Johns George Perez Scott Koblish