The next Pa Kent 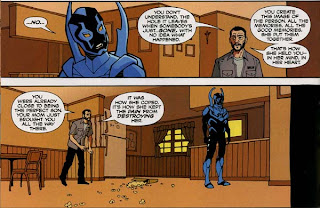 The latest death of Pa Kent has been getting a lot of attention, with Jonathan hailed as the person who made baby Kal-El the man he is today (poor Ma Kent gets scant credit).

He'll be back in a reality rewrite or two, but until then, who's the number 1 Dad at DC Comics? Alfred's pretty close, but he's always kept just that little bit of distance from Bruce, using the butler bit as a barrier to paternal intimacy.

So, ladies and gentlemen, I give you . . . Alberto Reyes!

Who? You know, the father of Jaime Reyes, the current, teenaged Blue Beetle. Not only is he a loving family man, he's supportive of his son's superhero career, like Jonathan Kent. And like Pa Kent, he's full of homespun wisdom - in the latest issue, 32, Alberto points out to the naive Jaime that allowing a politician to railroad him into being his anti-illegal immigration figurehead isn't actually a great idea for a hero in the Latino community of El Paso, texas. And he doesn't simply lecture his son, he takes him on a road trip to help him understand more about his people.

More impressive still, after giving his son the information he needs to reconsider his decision, Alberto drives Jaime to his next mission, a battle with the goons of the new Dr Polaris. And he backs up his son, with cane - he has a gammy leg - and firearm. There's no 'leave this to the older heroes' from Alberto; he trusts his boy to do a good job with the powers he's been given by aliens, and the values he's been given by himself and his wife, Bianca.