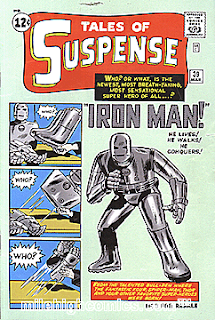 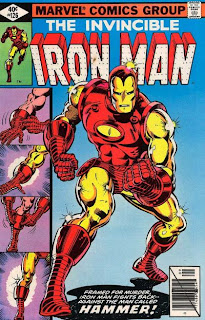 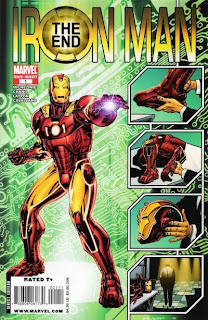 It's awhile since I've bothered with an Iron Man comic - my old friend Tony Stark disappeared around the time of Marvel's Civil War. But here he is again, decades in the future, with no mention of the conflict. And that's how it should be, I'd like to think that in a few years we'll have a Basil Fawlty approach to the situation at Marvel: don't mention the war.

Bringing us this last Iron Man story are co-writers David Michelinie and Bob Layton, who produced the Golden Avenger's golden era, beginning in the late Seventies. Now, as then, Layton also provides the inks for an up and coming penciller; for John Romita Jr, read Bernard Chang (of late, the regular fill-in artist on Wonder Woman). Together the team produce a light, optimistic tale that gives Tony Stark the send-off he deserves.

He first appears hale and hearty, with a hard-looking body and barely more grey in his hair than Reed Richards had at the beginning of his heroic career, but age has withered him and Tony has problems. He's developed a boxer's degenerative condition due to years of being pummelled inside the Iron Man suit. Plus, his latest project - a stairway to heaven - is stalling. Luckily he has a good woman at his side (the one who should never have left the book) and an heir apparent. Less happily, he has an old adversary working against him for an old evil conglomerate. Will Tony win the day and swap his metal boots for cosy slippers, or die a hero's death as he passes on the suit?

This book has everything I want from an Iron Man book - a smart Stark, mad science, new suits and heroism aplenty. Scripter Michelinie handles Tony's narration smoothly, and gives us a poignant moment or two. Like the recent film, Iron Man: The End is a reminder of how Tony Stark can work as a hero without succumbing to egomania.

It also has one of the ugliest logos I can remember sitting atop a cover that's Bob Layton's tribute to Tales of Suspense 39, previously homaged in Iron Man 126, from the original Michelinie/Layton run. Still, you can't have everything. We do get some lovely uncluttered art from the Chang/Layton combo, and thrillingly bright colours, recalling the good old Seventies, courtesy of Mike Cavallaro. Some of the new suit designs are clunky and/or weird, but that's Iron Man for you. I must say, Chang has a future as a fashion designer, coming up with some attractive, plausible tweaks to men's tailoring.

This one-shot is called Iron Man: The End but in hearkening back to the glory days it's defiantly old school. And I like that.
Bernard Chang Bob Layton David Michelinie Iron Man: The End 1 review Mike Cavallaro