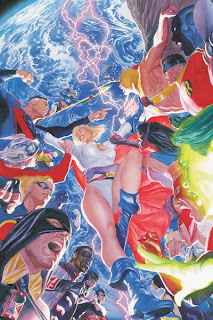 The blurb at the end of this issue tells us that next month's story is 'Be careful what you wish for!' Coincidentally, that very notion was going through my mind this time. For a while I've been praying for the end of the Gog storyline; it has its pleasures, but is too drawn out for my liking. And here's a whole issue's break from the wish-granting dullard. I should be pleased.

Er, would someone tell Gog I'm ready for his close-up? For this is the worst issue of Justice Society of America since the relaunch a couple of years ago.

Geoff Johns' story sees the Justice Society Infinity of the new Earth 2 follow our Power Girl back to New Earth from her Gog-sent sortie there. A confrontation between the two sides was bound to happen, but what a bunch of hysterics we're presented with here.

Our Alan Scott becomes a blithering idiot at the sight of a still-living Jade: 'It's my daughter Jay. It's really her.' How many parallel worlds has this guy, a hero for nigh on seven decades, encountered?

Truly, this is a Crisis of Infinite Whining.

Then, a few JSA members follow the JSI back through a Star Boy-created space/time warp, and are somehow sent to Earth 2's not-Mr-Terrific's office rather than wherever the JSI wound up. The latter team are soon in their Batcave, torturing our Peege with green kryptonite. Their Power Girl screams at ours, and beats up her weakened counterpart. Huntress falls apart over her secret love for Robin (bleurghh).

This story makes it clear that these are the exact same people as the pre-Crisis on Infinite Earths JSA. And yet they're angrier, and a lot stupider than they should be. For one thing, they don't seem able to conceive of parallel worlds. This is a team which calls itself Justice Society Infinity.

I do like the secret of Star Boy revealed here - his new ability is a stretch, but in comic book logic terms works just fine. I don't like that he casually drops in another of these prophecies Johns is so fond of (see also the Flash, Lightning Saga and Green Lantern) about a character's future.

Even the usually reliable Jerry Ordway, drawing the Earth 2 sequences, is less than stellar this issue, providing some terribly overwrought facial expressions (the worst being Jay's over the top reaction to seeing Mrs Terrific). You might say he's simply conveying the melodrama of Johns' script, but a pro as good as Ordway should tone down excesses, not run with them.

Regular artist Dale Eaglesham acquits himself nicely, conveying the power of cosmic gunk winds rather well early in the book, and giving us some good-looking final pages. I especially liked the opening spread he shared with Ordway.

Co-plotter Alex Ross, on cover duties, produces another hideous mishmash of colourful characters pulling faces at one another. Oh, for a simple illustration with something old-fashioned like a focal point.
Dale Eaglesham Geoff Johns Jerry Ordway Justice Society of America 20 review