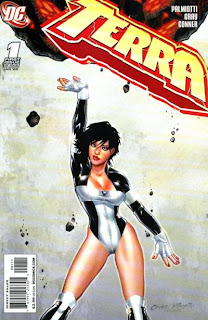 Wow, this is really . . . pleasant. Nicely drawn by Amanda Conner, competently scripted by Jimmy Palmiotti and Justin Gray, it's the definition of OK. The new Terra is rushing around the world rescuing people from earth-based menaces, while an unscrupulous industrialist gains powers that are just perfect for taking her on. A guest star shows up, followed by another, and the issue ends with a grand revelation of something I thought we already knew.

The most original aspect of the book is the introduction to the DCU of some fun underground races. The annoying bit is that it looks like we're going to waste a fair few pages of the four issue mini sorting out who Terra is. I vote for just declaring it and moving on, showing us why the DCU should make space for a Terra rather than getting bogged down in ancient continuity.

The cover illo by Conner and Palmiotti is lovely, and makes clever use of the logo, but said logo obscures the big rock she's holding up, so the full effect of her powers is obscured. Maybe the logo itself should have been hewn from rock?
Amanda Conner Jimmy Palmiotti Justin Gray Terra 1 review