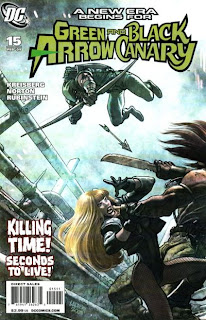 This comic has everything a first issue should have - an origin recap, a look at the main relationships and an action sequence or two.

It's a shame, then, that this isn't a first issue. It's number 15 and it seems new writer Andrew Kreisberg hasn't noticed. Why else spend pages showing us Ollie's beginnings and how much he and Dinah love one another? The latter comes in cringeworthy dual narrative boxes as Ollie bids to rescue Dinah from Dregz the Throwaway Villain.

Who? Exactly. He's just there to hold Dinah - knife to the throat, of course, so she can't use her sonic scream to save her own bacon - while Ollie has his 'in case you just joined us' flashbacks for, in the words of the title, 1.078 seconds. As well as the origin and relationship stuff, Ollie's thoughts bring us up to speed about some actual fresh happenings, as Mia and Connor Hawke are speedily written out.

Kreisberg does deliver some nice moments, such as Ollie calculating his shot, and a terrific line from Dinah as she finally gets to defend herself, but these are balanced out by some horrid dialogue. Connor, for one, seems to have spent his convalescence watching bad daytime soaps, telling Ollie and Dinah: 'This isn't a reflection on you. It's about my reflection. The one that stares back at me in the mirror. It's not mine yet. I don't know if it's because I've lost something . . . or maybe now I realise that I need something that I've never had. But even if I don't know who I am . . . I know where home is'

This last line is said as Conner hugs his dear old dad, and Dinah looks on adoringly. Pass the sick back Ethel.

I wonder if Kreisberg is simply trying too hard - some of the narration is very self-conscious, as if he's trying for the poetic. Certainly it doesn't seem the sort of thing Ollie would have going through his head in a combat situation. Really, what motivates the flashbacks? Ollie needs to be in the moment, not playing 'who I am and how I came to be'. It's not even as if a recap is needed so soon, Andy Diggle spent a whole mini on Green Arrow's early years recently - and there's another look due in a month or two, as DC has its Origins and Omens month. Maybe editor Mike Carlin thought TV writer Kreisberg (Boston Legal, Eli Stone) would entice new readers, and wanted to bring them up to speed. If that's the case, Dinah should have had her close-up too, as this is meant to be her book as much as Ollie's.

Still on the narrative front, please, no Superman/Batman-style alternate thought boxes; they're just plain annoying. If we're going to have internal monologues, use the grammar of comics, that is, bubbles. They worked fine for 60 years or something.

A query for more regular readers than me (I jumped ship a couple of issues into the current series as Judd Winick's fast and loose style of plotting failed to appeal): when exactly did Dinah gain super-speed? She surely has it this issue.

All in all, not a great first effort from Kreisberg - too much Green Arrow 101, not enough Green Arrow and Black Canary 15. Add in some clunky humour forcing Dinah into the role of Seventies sitcom mom and a melodramatic aside involving an apparently abused wife, and you have a middlingly entertaining book that's nowhere near the smart read I expected from a professional TV guy. But I'll give Kreisberg another couple of issues, see where he goes once he gets the transition stuff out of the way (I expect Dinah to have an origin recap next month). Maybe he'll find a tone for the book I like.

As for the art, penciller Mike Norton always does a decent job, and he has one or two great moments here, such as Dinah using her canary cry, and Ollie in his original garb (before he pulled on a hood, apparently deciding that archers didn't need peripheral vision). And I was delighted to see veteran Joe Rubinstein on inks, the man is terribly undervalued.

The 'new era' is underlined by a painted cover by Jose Ladronn and it's not great - awkward positioning makes Ollie look like a headless bug while Dinah looks like a senior citizen in a fright wig. And the threatening Dregz only just edges his way into shot. I'm tired of painted covers on comics that use line art, they just don't work - give me a sharp Brian Bolland or Alan Davis illo anytime. Or why not give Norton and Rubinstein a crack,if they're sticking around?
Green Arrow and Black Canary 15 review