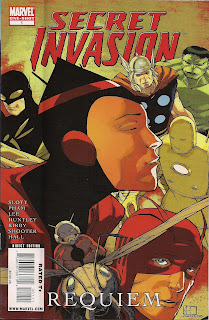 . . . or, The Skrulls Got Me Killed and All I Got Was This Lousy Cover.

Brrr, that really is a weird illo from Khoi Pham. What's the Wasp known for? Being a tiny superheroine. What do we have here? A composition that makes Janet Van Dyne look huge. And ugly. Really, the woman has her eyes closed and wears a beatific smile, as if she's just let off a secret fart. And why does Hank appear three times in the image? One for each personality (this week)?

The Wasp had more than 200 costumes. Some of them were even attractive. So why not just give us a simple pic of Janet wearing one of them, in heroic pose, with the Avengers? The original members are here, but they just crowd the image rather than salute Jan in any way.

Yes, I'm going on, but Pham has talent - as seen in this issue's new story - and this drawing is just plain peculiar.

The contents of the issue are more pleasing - that new story featuring Hank and robotic Avenger/Ultron's first wife Jocasta ruminating on the late superheroine, framing two classic stories. Said reprints are the Wasp's origin, as she becomes an insect girl to battle 'The Creature from Kosmos' and the story that came to define the Jan/Hank relationship (wrongly), Court Martial.

I'd not read the older tale, by Stan Lee, HE Huntley, Jack Kirby and Don Heck previously, and it's fascinating to see that Hank was patronising and dissing Jan from their very first meeting. And she just takes it, seeing his demeanour as a challenge for her feminine wiles. 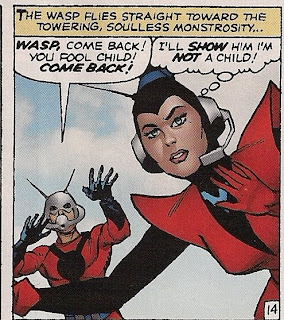 It's interesting that Hank never tells Jan why he's initially attracted to her - she's a younger lookalike for his late wife, Maria. Not creepy at all, then.

It's funny, I've defended Hank Pym over the years when people try to make the time he hit Jan, while under terrible stress, define their entire relationship, his whole character. But reading this first meeting of Ant Man and the Wasp, seeing what a creep he was even at the beginning, then re-reading Jim Shooter and Bob Hall's 'Court Martial' and seeing Hank as a freaking lunatic from beginning to end, not just towards Jan but the entire Avengers . . .

. . . factor in the reminders of their long relationship in a text piece at the end, reminding us just how often Hank lost his marbles/Pym particles and I wonder why he's ever allowed to be on an active Avengers roster. The man surely needs ongoing psychiatric help and superheroic supervision. And Jan should have knocked her neediness for this nasty father figure on the head long ago.

Dan Slott, who writes the new piece, 'How I'll Remember You', knows this. He goes straight for the self-aggrandising side of the scientist, having Hank claim Jan wasn't always his true love, she was his 'groupie'. Read the Kosmos tale following and it's clear she was nothing of the sort - she was a young woman determined to avenge (aha!) her murdered father and, seeing the brave soul within, Hank actively recruited her to be his partner. Yeah, she was a tad soppy, but heck, her father had just died, she was vulnerable. Does Hank notice, in his retelling, that he was too stupid to think to grow to normal size when called on to fire a gun, rather than employ the aid of ants? He does not, cos he's the big hero and Jan was his 'greatest experiment'. Arse.

The surprise superhero this issue isn't the new-look Hank Pym, as he becomes legacy hero The Wasp. No, it's reprint colourist A (which I think stands for Andrew) Crossley. While his hues don't make a great deal of difference to 'Court Martial', the 'Kosmos' art is a revelation. Crossley uses today's techniques to add depth to the Kirby/Heck artwork I'd never have guessed it needed. Yes, the original colour job has charm, but it's fascinating to see how great Kirby and Heck might look if they were teamed today.

As well as the aforementioned hero history pages, the issue is rounded off by the reprints' original covers and a gallery of the Wasp's Wardrobe of Wackiness (who could forget George Perez's one-legged number? Or George Perez's bridal layered creation. Or . . .). This really is a fine reprint-plus package from editors Cory Levine, Jeff Youngquist and Jeanine Schaefer.

BUT DID YA HAVE TO KILL OFF JAN?! She could be dead for weeks.
A Crossley Dan Slott Khoi Pham Secret Invasion: Requiem