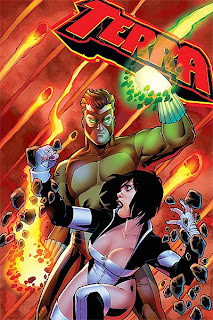 It's the penultimate issue of the four-part mini and we learn just who Terra is, and what her relationship is to the two late heroines who went by that name. There's a fight between our teenage earthmover and zombie master Deathcoil for the life of Geo-Force in which the main battleground seems to be the world of truly awful banter, more under-Earth races and two dastardly villains.

Scripters Jimmy Palmiotti and Justin Gray have produced a script that's as light as a good souffle and occasionally as tasty, while Amanda Conner draws up a storm. Special praise to her, and colourist Paul Mounts, for one of the best-looking underworld kingdoms ever. It almost makes me forgive the bikini on the rock-mermaid.

Terra seems to have a new use for her powers this time, manipulating crystals a la the late, unlamented Teen Titan Kole, and it makes me laugh that she still hasn't run into Richard the transformed mad scientist I'd assumed would be her big bad. I'd also assumed his girlfriend, Veronica, was Wonder Woman baddie Veronica Cale, but after hilarious scenes involving them this time, it looks like I was wrong.

So, one more issue of a comic that won't change the world but has proven a fine palette cleanser in this age of never-ending events. It looks as if Terra is destined to join the Teen Titans and it'll be wonderful to see such a fine young lady join that over-excitable team.
Amanda Conner Jimmy Palmiotti Justin Gray Terra 2 review