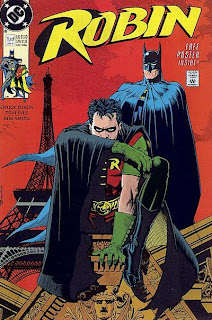 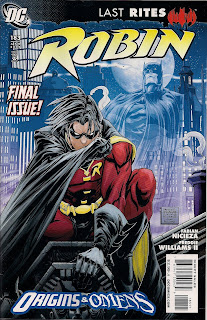 Artist Freddie Williams II marks Robin's final issue with an acknowledged homage to Brian Bolland's cover for Tim Drake's first mini series, back in 1991. It's a smart piece of work, amply demonstrating that Tim Drake looks loads better in his Neal Adams outfit than the recently tweaked version. That was the idea, wasn't it?

It's also appropriate as Tim once more faces his first real foe, Lady Shiva. This is a thoroughly enjoyable issue - like all of writer Fabian Nicieza's Robin books it's a character study of Tim Drake as well as a first class superhero comic. The only problem here is with the resolution. Tim's internal dialogue gives us such lines as: 'What do you do if you expect to die tomorrow?' The point is made a few times, cranking up the drama. And when the resolution comes, it's smart, and makes Tim look good . . . but it also makes nonsense of his narration. Maybe I'm being stupid - and I'm always glad to be put in my place, so feel free to tell me - but it seems there was never a strong possibility that, in the words of the Silver Age-evoking title, 'Robin Dies at Dawn' because Tim knew more than he was telling.

And Nicieza needs to watch he doesn't turn Tim into another all-knowing bat character a la Oracle and Batman (RIP) - it's enough he has a battery of screens showing what's up in Gotham without him being able to keep tabs on everyone he's ever faced, wherever they are in the world.

For the Origins and Omens story here also has him taking down an old bad guy, the Obeah Man. Tim's waiting for him when he bribes his way out of his Haitian jail. OK, I'll buy that he'd keep close tabs on the guy who killed his mother, but coming in the same issue as the Shiva encounter, it starts to look like nothing is a challenge for Tim, teenage master planner.

Back in the main story, we check in on Tim's supporting players as he says goodbye to them - well, he knows he's going to die/his book is going on hiatus. It's a reminder that Robin has a rich cast and I hope they'll be around as he becomes Red Robin, which the book strongly implies is his next move.

Williams is on stonking form, his Robin a pocket dynamo racing across the city in great panels like this (click for a bigger view).

The splashy fighty scene with Lady Shiva (truth be told, a boring little madam) is equally good, as is the quiet Batcave scene Nicieza supplies for Tim and Jason Todd.

So, that's Robin over with and the next phase of Tim Drake's life set to begin. Nicieza, Williams and co deserve credit for a cracking send off.
Fabian Nicieza Freddie Williams II Robin 183 review