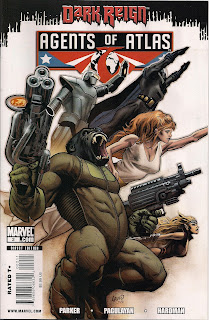 Well here's a comic not suffering from 'that difficult second issue syndrome'. Agents of Atlas 2 is at least as good as the debut book, as writer Jeff Parker shows more of the Atlas Foundation's war on Norman Osborn's rotten regime. Better yet, we have a second tale woven in, flashing back to 1958. Both begin at Edwards Air Force base, which I'd assumed Geoff Johns had made up for Green Lantern - shows how much I know. From there they diverge, but it'll be interesting to see how they converge once more after the double cliffhanger here.

Every agent is unique - alien, spy, goddess, Atlantean, robot, gorilla guy - but boy, do they have chemistry when they get together. I don't know if his long and wonderful run on X-Men: First Class helped, but Parker really does get the idea of superheroes as family. When one member goes a little off the rails here, for example, there's no judging, no Avengers-style court martial - just the best possible spin put on her actions. And we see the heroes were equally close back in the Fifties, in a delightful scene set in a jazz bar. 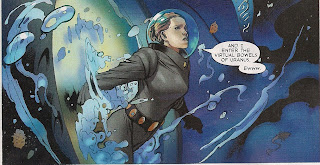 Lovely art, wot? That's the work of Carlo Pagulayan and Jason Paz, and it's equally good throughout. The 1958 illustrations are fantastic too, very retro, very cool and very much to the credit of Gabriel Hardman and Elizabeth Dismang Breitweiser. And take a huge bow digital painter Jana Schirmer - I've been negative about Marvelmurk, the muddy palette which seems to be in favour at the House of Ideas these days, but this is something else. The colours in this comic are simply gorgeous, from the blue skies above the air base to the reds of the jazz club via Bob, bobbing in his mucky Uranian chamber. If Marvel hasn't got Schirmer on a contract, they're nuts.

The cover this time is one of the better Greg Land jobs I've seen, there's not a toothpaste model in sight and nicely coloured by Justin Ponsor. OK, I'd have liked it more had suave fella Jimmy Woo been on there, and had Bob's head been angled so we could actually see it, but nevertheless, it's a striking image for a book that deserves to be a massive hit.
Agents of Atlas 2 review