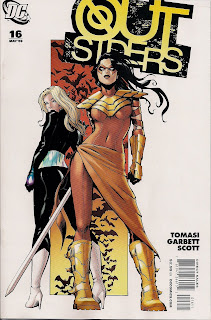 There aren't many times when it pays off for a comics fan to be a big old musicals nerd as well. But Outsiders 16 could be one of those. For as our new team attends a German mining disaster, field leader Geo Force asks Halo to go to the surface and speak to survivors. Katana suggests she go instead, as Halo's light powers might be more useful below the surface than her own skills. Brion says someone with Halo's 'qualities' might serve the mission better. Which brings the following exchange. 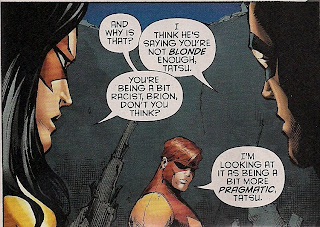 Come on, tell me that isn't an Avenue Q tribute. I'm singing the song 'Everyone's a little bit racist' even now . . .

As for the rest of the issue, writer Peter Tomasi continues to define the group, with Metamorpho explaining what aspects of Batman the individuals represent. He's acting a tad more Plastic Man than I prefer, but it's a terrific scene nonetheless. There's an understanding between this team that I like, explainable by the long association most of them have. New guy Owlman is fitting in just fine, happily. Of course, the Creeper should go, but that should go without saying, he's a primary-coloured pillock.

While I can live without Metamorpho's personal puppetry, I do like how Tomasi is using his cast's abilities in ways that are new (to me, at least), such as Geo Force talking to the Earth, and Halo's ability with languages.

The Outsiders new space-HQ is named this issue, it's the Haven. Which is dull. Given its shape - a cross between an axe and a bat - may I suggest the Batlax? Or does that sound like a superheroic stool softener?

So who's the bad guy? That would be guys, plural, a bunch of immortal aliens or something, out to find a life-force giving mineral in the mine. They've not grabbed me so far, but it's early days.

Lee Garbett, with inkers Trevor Scott and John Livesay, produces good-looking superhero art (his Katana is a particular delight); it's not distinctive, but the storytelling is spot-on and I'd love Garbett to be around long enough to develop/show off a more personal style.

The only disappointment this time was the non-appearance of Alfred, but I suppose that's fair enough - the team is on a mission and he has silver to polish and sidekicks to be sarcastic to.

Garbett and Scott's cover is nicely executed, but come on chaps, do we have to have the cheesy two-heroine pose, one sticking her hips out, the other showing her bum? This comic is better than that!
Outsiders 16 review