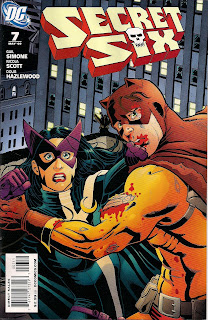 A pal tells me that at Wondercon recently, a DC Comics editor took umbrage at his very suggestion that most stories these days were written for the trade, hence the predominance of long 'arcs'. Well, if all lengthy arcs were as good as Unhinged, which has filled the first seven issues of Secret Six, readers would have less to sigh about.

Where many longform stories feature an issue or two of water-treading, the consistency of quality here has been remarkable. Imaginative action and continual revelation of character has remained to the fore, making this a series to savour. Which is tough, given the often-breakneck pace.

So yes, the finale doesn't disappoint. Our anti-heroes reach Gotham City after their cross country trip centring on old devil Neron's 'Get out of hell free' card and, funnily enough, all hell breaks loose. Dozens of villains attack the Six at the behest of the vile Junior, and they pay the price, before the story wraps up in a thoroughly satisfying manner.

Writer Gail Simone has never been shy of sick moments, and I've not minded at all - this is a book not so much skirting the darker edges of the DCU as running up and snogging them. Sadly, an innocent bystander is (apparently) killed this time, which is where my enjoyment of Junior's evil nature ends. I had the same reaction when she murdered a prostitute in an earlier issue. I don't mind at all when horrible things happen to horrible people - especially if they make me chortle - but it's less palatable to me when innocents are involved. I know it's likely that such things would happen, but I'd be happy for the realism to be restrained before we reach that point. That apart, Simone delivers another cracking script, clever, sly and witty.

The talent on show doesn't end there, as the art team of penciller Nicola Scott, inkers Doug Hazlewood and Rodney Ramos, and colourist Jason Wright provide page after page of beautiful work. The latter has emerged from this run as one of the top colourists in comics - check out how he's toned Gotham Bay on page six, for example. And the way he shades characters for night scenes should become the industry standard - rather than altering the entire palette, as seems to be the Marvel way these days, he simply darkens the character tones, adding lowlights. If Wright doesn't win an Eisner Award for Best Colourist this year someone should set Junior on the judges.

Given how much I enjoy the art, it's odd that I found Scott's cover so unsatisfactory. I think it's the concept - Catman and Huntress in a smoochy fight would have suited an earlier issue, but for the end of the arc, we needed something bigger, more dramatic.

And funnily enough, there's just the image inside the comic. I doubt you'll see a better piece of superhero genre artwork this year (click, because size matters). 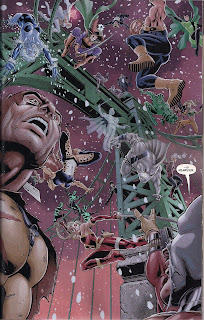 Never mind though, I've had seven months of cracking entertainment from DC and you know what? If by some weird coincidence a trade appears, I may even buy it.
Secret Six 7 review