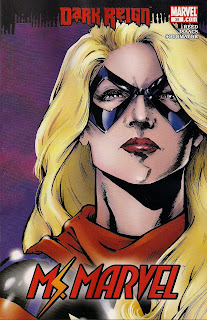 I was a big supporter of the early issues of Brian Reed's Ms Marvel, but as her determination to be 'the best of the best' led her to become a bloodthirsty government lapdog, my interest waned. Finally, my loyalty to Carol Danvers checked out along with her humanity. And she died. Well, Marvel-died, as the series recap at the beginning of this issue makes clear (click on the extract if your super-vision is failing).

Until Carol does the Phoenix tango, former Thunderbolt member Moonstone is filling in and to be honest I don't notice that much of a difference.

The costume is the monstrosity of old, yes, but it's still an angry blonde killing without compunction. The deaths come as the issue opens with the new Ms Marvel stopping a bank truck robbery and finding herself a popular lady. The rest of the book concerns her encounter with Norman Osborn's new in-house psychiatrist and it's well done, providing an insight into Karla Sofen's personality while throwing in a twist of two.

My problem is that an issue full of Moonstone is a strong brew. As a member of the Thunderbolts I found her triumphs and failures fascinating, but there she was just one of a number of villains at different stages of their journey to redemption (or not). Here it's all Karla, all anger. That is not a misleading cover. She's a slightly nastier version of a character who became so nasty that I dropped her book.

So while I appreciate that this is a pretty well-crafted comic from Reed and artist Rebekah Isaacs, I'll accept that it's not for me. Hopefully when the original Ms Marvel returns, she'll be a tad sweeter and we can be friends again. 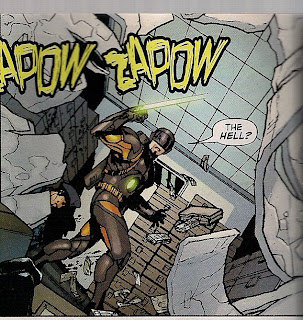 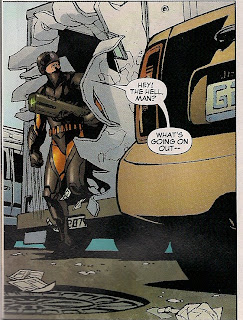 Oh, one more thing, would someone please retire this Marvel Comics cliche? Twice on one page?
Ms Marvel #38 review