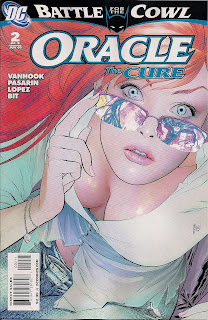 Last issue Calculator murdered an online associate of Oracle's in his quest to unlock the secret of the Anti-Life equation and cure comatose daughter Wendy. This time Barbara Gordon is in Hong Kong to meet fellow computer geniuses face to face in a bid to learn who's messing with the web. Along the way she survives a street attack and we see once more that while she's no longer Batgirl, she's still able to protect herself. It's a little unsettling to see her repeatedly bash the face on one of the thugs off the ground, but it rings true . . . alone in a back alley in a wheelchair, hurt, threatened with rape. who could blame her for striking back, ladling a dollop of vengeance on to an act of self-preservation?

As he did last issue, writer Kevin Vanhook gives us perfect pen portraits of Oracle and the Calculator, and fleshes out some new supporting characters. The computer talk is over my head, but doesn't get in the way of the story, its convincing ring adding tasty verisimilitude. He also manages to make Tron/Second Life scenarios seem like a real threat.

Pencillers Julian Lopez and Fernando Pasarin, and inkers Bit and Norm Rapmund, give great Babs, and bring the virtual worlds to life. They don't manage to make the Calculator's cybernetic avatar look scary but I doubt anyone could. 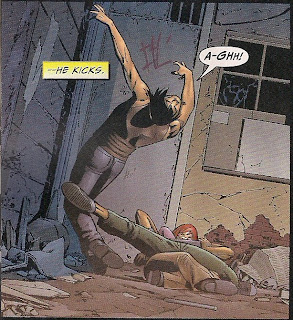 There's one panel in which it looks like Barbara kicks out at a bad guy, but perhaps a paralysed leg simply lolloped into a handy position. Or it could be an effect of the Brainiac virus she encountered awhile back. The main thing is, there is (pardon the expression) plenty of wiggle room.

Hi-Fi does a lovely job of evoking Hong Kong's neon nightlife, so much so that I'd love to see a series set there. And Steve Wands' lettering is as good as ever, with extra marks for some nice title design.

Guillem March's cover is a thing of beauty, and who knew Babs had such shiny baps? Mind, he can't make cyber-Calculator look scary either.
Oracle: The Cure #2 review