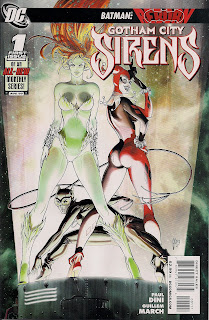 Gotham City Sirens? Gotham City Tarts, going by that admittedly nicely rendered cover. I suppose you can't fault the honesty - cheesecake title, cheesecake images - but can we keep the levels down?

Cover artist Guillem March plays it a little looser inside, getting very cartoony at times, which suited the debut of rubbish wannabe villain Bonebreaker. He differentiates our three leads - Catwoman, Poison Ivy and Harley Quinn - well: Selina is steely but tired; Pamela, ethereal and smart; Harleen, mischievous and distracted. March's Riddler is unrecognisable, partly due to Ivy's treatment of him, partly due to him not having had a settled look for years. The action sequences are fun, 'louder' than other Bat-books in their presentation, which provides a unique selling point.

The best USP is the personalities of our leads, three unique women who, when they come together, fizz. This issue writer Paul Dini has them deciding to live together for protection in the powder keg that is Gotham. Ivy, concerned that Selina has lost her mojo, checks in with Zatanna, whom she suspects of having tinkered with Catwoman's health. It's clever that Dini has Ivy appear to Zee as a gnarled face in a plant rather than the beauty that is her default form. I also liked a gag that'll appeal to anyone with an email account, the debut of the Broker (who comes from the Paul Gambi school of characters who have to exist in the DCU) and a cliffhanger that makes perfect sense for these characters.

Oh, and there are gargoyles. Of course.
Gotham City Sirens #1 review