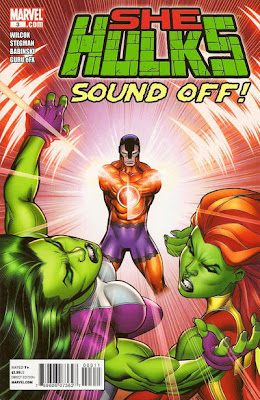 The She-Hulks start off the New Year by “sounding off” at each other in a heated exchange over how Amelia was able to discover Lyra's secret identity. The Red Ghost, Ivan Kragoff, makes up for his anti-climatic takedown last issue by interrupting the squabble, sabotaging the flight controls of the Gamma Jet so his apes will die with him instead of being taken from him again. After a brief struggle and a last-minute save by the Hulk, Jen and Lyra arrive safely at Gamma Base to add Kragoff to their growing collection of former Intelligencia members.
The bond that is developing between the She-Hulks becomes evident when Jen stands up for Lyra and dissuades cousin Bruce out of any thought of keeping his distant daughter and Amelia detained at Gamma Base. Lyra and Amelia, meanwhile, air their grievances, with the latter vowing to keep Lyra’s secret if she attends the upcoming school dance. Readers have to wait until the next issue to see if Amelia’s extension of the olive branch is a genuine expression of friendship or part of some teenage subterfuge. Jen joins Lyra in her new quest for a party dress and offers an important piece of advice that will make every She-Hulk fan smile (click to enlarge): 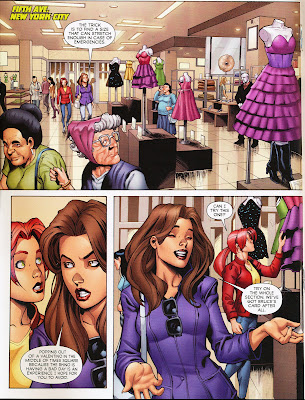 With the shopping finished, Jen and Lyra are off to Switzerland to apprehend the remaining members of the Intelligencia, Klaw and Mad Thinker. After dispatching a squad of red-coloured Awesome Androids, the She-Hulks prevents the Mad Thinker from transferring Klaw’s powers into Byte, his powerful new android. Unfortunately their intervention triggers an explosion from Klaw that unleashes an avalanche on the now-devastated laboratory. The story ends on a cliffhanger as Jen and Lyra run for their lives towards the last issue of the series.
She-Hulks #3 is another solid issue by writer Harrison Wilcox and artist Ryan Stegman that delivers greater depth and dimension in the relationships Jen shares with Lyra and with Bruce. While the one between Jen and Lyra is a position of growing understanding, Jen’s argument with Bruce and subsequent use of his credit card to go on a shopping spree show that everything is not in perfect harmony between them.
The one thing I did not like in this issue was the three words on the lower right hand corner on the final panel that stated “To Be Concluded…”
EUGENE LIPTAK
Eugene Liptak is a librarian and author who wishes that certain celebrities followed She-Hulk’s fashion advice..
Eugene Liptak Harrison Wilcox Jen Walters Lyra Ryan Stegman She-Hulks