Their Greatest Adventure - Save the Doom Patrol! 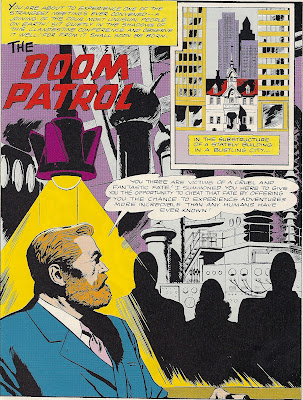 Since 1963 the World's Strangest Heroes have been beating the odds. Brought together by the mysterious Chief, Negative Man, Elasti-Girl and Robotman were the Doom Patrol. The heroes created by Arnold Drake and Bruno Premiani not only risked their lives for the world, they've given them, voluntarily dying at the end of their original run to save a fishing hamlet.
This being comics, the trio eventually returned, but the spirit of sacrifice has always been there, through multiple runs and as many cancellations. 'Hard-luck heroes' is a phrase that could've been coined for the Doom Patrol - they've never seen the glory of the JLA, JSA or New Teen Titans, but they've kept plugging away in their various incarnations.
The most acclaimed, and possibly most creatively successful, saw Grant Morrison and Richard Case dial the weirdness up to 11, but every run has had something to offer, whether we're talking fascinating characters (a transvestite street, a fractious, friction-free kid, a girl with 64 personalities and as many powers, a living black hole with a love of lederhosen), memorable villains (Monsieur Mallah and the Brain, The Brotherhood of Dada, the Aristocrats) or talented creatives (everyone mentioned so far, John Arcudi, John Byrne, Paul Kupperberg, Tan Eng Haut, Erik Larsen, Steve Lightle). Not all Doom Patrol fans have loved every period but every period has had its fans.
The latest run, primarily by Keith Giffen, Matthew Clark and Ron Randall, has somehow seemed to please fans of every generation. The problem is, it hasn't been seen by enough readers who aren't already fans. DC Comics has been brilliant in backing the book despite its low circulation, and it's not really surprising that cancellation has been announced with #22 in May. C'est la vie, wot? Knowing the Patrol, they'll be back in a few years - there's always a new bunch of creatives itching to try their take on the team.
But a petition has been set up by Petar, the Chief of dedicated Patrol blog Doompedia. It's a plea to save the Doom Patrol, win it a few more issues. The call to action points out that after years of false starts, the current series is a hugely enjoyable romp, melding the best aspects of previous incarnations. And I agree, I've praised the book many times, both here and on Doompedia. My most recent looks at the comic focused on #17 and #18, with the debut of new foes for the team. If you want to know why I love this series, click here and there.

Perhaps you've tried the book and didn't like it, which is fair enough. No series is for everyone. But if you haven't, please sample the Doom Patrol - Giffen always gives enough in the way of recaps and introductions to make arrival at Oolong Island easy. I'm sure plenty of back issues are going cheap - and if you like what you see, let DC know by buying the next new issue, #20. And signing the petition. Maybe even send a short email to the DC letters pages.
I'm delighted that DC gave this run a decent length of time to find an audience, but no book can find a firm fanbase without constant promotion. More guest shots like the recent crossover with Secret Six would help. Better still would be a short promo strip in the back of all DC books for one month, as has happened lately for the likes of the Flashpoint event and War of the Green Lanterns - both guaranteed crowd-pleasers already. That seems to be a shame, and a waste of time - it's the smaller books that need help. I know Giffen, Clark and co could knock up a clever, entertaining introductory short over a weekend were DC to ask them.
House ads would help too. Creators could talk up the book at conventions. Maybe we could have a 99c issue ... I'm sure that if a lot more people tried the book, enough would stick around to keep it alive.
Interest from the customer base would give DC reason to keep the faith just a little longer and save the series - if Spider-Girl fans can do it, why not Doom Patrol devotees?
I'd say to DC, 'why wait a couple of years to relaunch the team, when you can keep this Doom Patrol going?' Join me?
Links: Save the Doom Patrol
DC Comics letters page
Doompedia