Frankenstein and the Creatures of the Unknown #1 review 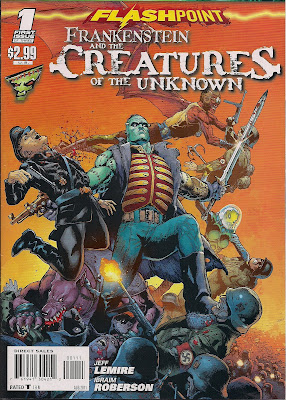 Like Frankenstein's creation, this comic is the sum of many parts. Most obviously, there's the monster himself, from the Spawn of Frankenstein strip in Phantom Stranger via the more recent Seven Soldiers event. The Creature Commandos hail from Weird War Tales, which also hosted the GI Robot who shows up here. More surprisingly, Captain Nathaniel Adam (Captain Atom) and Robert Crane (the original Golden Age Robotman) play important parts. On the super-villain side there's Baron Blitzkrieg from Wonder Woman, looking as ridiculous as a Nazi in Spandex always will.
Throw these disparate ingredients together and you might expect an unpalatable hodge-podge, but that's not the case; this first issue of a Flashpoint mini-series is a beautifully balanced dish. Jeff Lemire's story takes us from the monster squad's 1943 creation through to their ending the war and the day the team received its marching orders. By issue's end they're in the present day, strangers in a world torn apart by a new war - the conflict between Aquaman and Wonder Woman. Along the way we've become acquainted with Frank and comrades Velcoro the vampire, Warren the werewolf and Nina the lagoon lady, and been reminded that comic book secret projects - even American ones - are not to be trusted.
This is a splendid debut, full of engaging incident and intriguing characters. I'm almost sorry the Creatures win the war, as Lemire's Forties sequence is such an absorbing read (click to enlarge images). 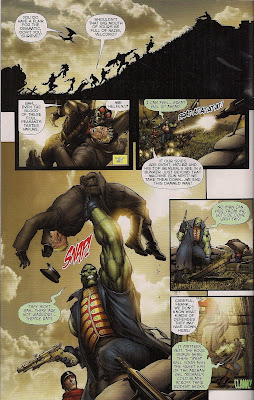 And Ibraim Roberson's art, as coloured by Pete Pantazis, is spectacular, finding beauty on the battlefield. The creatures look as spooky as 'living embodiments of the century's classic archetypes of fear' should. And while Frankenstein (yeah, I know the creator vs creation distinction, but that's what he goes by) has a powerful frame, there's pathos in his body language. Pat Brosseau's lettering further helps convey Frank's emptiness.
Scariest of all is their human handler, Lt Matthew Shrieve, who races into battle wearing a red polo neck sweater. Hold me.
Oh, and there's one more familiar DC monster in here, but sadly he doesn't last long, proving mere cliffhanger fodder. It is a good cliffhanger, though.
This issue bodes well for the rest of the mini-series, and the Frankenstein: Agent of SHADE series to follow from Lemire. Meanwhile, if you like monster tales, war stories or 'just' beautifully crafted comic book fantasy, give this issue a try.