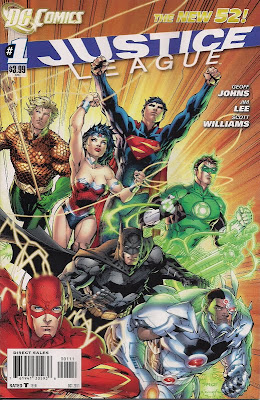 Say hello to the New DC Universe. Tweaked costumes, younger heroes, different relationships .... it's bound to be a bumpy ride, but that's not so bad in the superhero genre. DC kicks off with its big guns book, hoping the traditional combination of Superman, Batman, Wonder Woman, Flash and the rest draws us in ...

Promotional images have shown more than a dozen characters. The cover depicts seven. Inside we meet four, only three of whom are yet heroes. Writer Geoff Johns is taking us back to the formation of this new JL (no 'of America' as yet), so it's understandable that the team isn't together. I would, though, like to at least check in with all the main players - most of this book is a not-quite team-up between Batman and Green Lantern as they track down an alien in Gotham City. Their efforts are hampered by an exceedingly well-equipped Gotham police force - massive guns, assault helicopters - but they fail to capture the heroes.

After planting a bomb and crying out to Darkseid, the insectoid creature opts for immolation, leaving its pursuers looking for clues. Green Lantern wonders if the creature is linked to known alien Superman, so off they pop to Metropolis. There, football hero Vic Stone is being offered college scholarships left, right and centre, but he's sad cos his dad is too busy to attend games. He's on hand as GL and Batman arrive, but doesn't meet them, though they do meet someone - Superman himself.

And that's that for the first issue. Batman, having become more rounded under Grant Morrison of late, is back to the snarly, growly fellow from the Christopher Nolan films. Green Lantern is so big-headed that he refers to himself in the third person. Quiet Man Vic is pretty much where he was in his New Teen Titans origin, 30 years ago. And Superman cuts an impressive figure, but in nine words manages to sound every bit as arrogant as Batman and GL.

I realise that DC wants new readers to feel they're getting in on the beginning of a whole new League, but my preference would have been to see the team in action today, with a flashback origin later on. I want to meet the mature League first - they don't have to be 'old', but I don't want bickering all over the place; this issue has GL shooting as much testosterone as he does Oan energy.

And what a lot he fires, wasting power on seriously complicated creations such as riot cops when a simple wall would do - gotta be cool for the kids, I guess. Which isn't to say they don't look good as depicted by penciller Jim Lee, inker Scott Williams and colourist Alex Sinclair. It's just that complex constructs were never Hal's thing, they were the USP of his successor, Kyle Rayner (then again, Barry Allen has nicked the Speed Force shtick from Wally West, allowing DC to claim he's redundant, so why shouldn't Hal also plunder the popular?).

Everyone looks impressive on the page, even with the unnecessary costume changes. Lee's Batman and GL may only stop scowling when they're being cocky, but they certainly look like powerful figures. And Superman, hideous new costume apart, looks great too, with heat vision slug trail and a fine head of hair just waiting for a kiss curl. Vic isn't a superhero yet, but there's a pleasing grace to him. And the creature from Apokolips has a suitably menacing design.

I really feel I should like this issue more; it's professional, has splashy action, attention-grabbing character dynamics and a bit of a mystery.

But it just feels so old-fashioned. I was going to use 'Nineties' as a pejorative, but that decade gave us Grant Morrison and Howard Porter's immensely inventive and sophisticated JLA. This reads like a bog-standard comic from the decade - very manly, but not especially engaging.

But it's only the first issue, for goodness' sake. As more characters are pulled in by Johns, characters who aren't all Type As, the dynamics should become less annoying. And who knows how Lee may surprise us if he's enthused.

Let's hope Lee doesn't look to his cover for inspiration, what with Hal and a humongous green gun that just screams 'tiny willy', a Superman with a head made from a spoon, a Flash with horns and a super-busty Wonder Woman too dim to notice when her costume's shrunk in the wash.


Justice League gets the new DC Universe off to a suitably splashy start. Not a wildly interesting one, but Johns and Lee have been at the comics game a long time, and produced enough good stories that I'll give this book a few issues to find its feet. The promise of Darkseid helps, with the villain having enough scary, formidable lackeys to challenge the tyro team. I just hope we finally see the fresh approach DC has promised.
Flashpoint Geoff Johns; DC Comics Justice League #1 review. Jim Lee New 52 Scott Williams