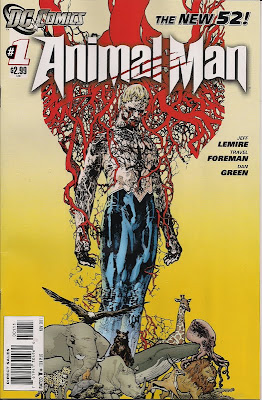 Buddy Baker, stuntman. Superhero. Activist. And now, actor. Having semi-retired Animal Man, Buddy's taken the lead role in an indie movie and wondering what to do next. One thing he has to do right now is explain to daughter Maxine that she can't have a pet dog, because being in regular contact with a single animal messes up Buddy's being.

Hearing of a hostage situation in a children's cancer ward, Buddy dons one of his costumes and goes to help. His ability to borrow the 'powers' of animals helps him save the day, but he's disturbed by the situation - the gunman was mad with grief at the loss of his little girl to cancer. And the incident somehow leaves Buddy with bleeding eyes.

Cleaned up and back home, Buddy dreams. He finds son Cliff, terrified of his sister. She's slaughtered their mother Ellen, and eviscerated Cliff. The boy dies and Maxine shows up, leading Buddy away from the danger she says is out to get them, the Hunters Three. This awful trio shows up and Buddy wakes up, not to the relief of the banal, but to real-life horror.

This comic is quite the ride. I've outlined the story, but you need to experience it. You have to read Jeff Lemire's well-chosen words, watch as Travel Foreman's artwork shifts from normal to nightmare. Be with Buddy, Ellen, Cliff and Maxine as their lives enter a frightening new phase.

Lemire puts to rest the lie that married life kills the superhero strip. Ellen, Cliff and Max aren't supporting cast, they're co-stars, integral to the story and enhancing it at every stage. They're why Buddy is the man, the hero, he is.

In this book, the ordinary and the extraordinary are equally entertaining. Buddy's kitchen chat with his family is a joy to eavesdrop upon, while his instinctive mastery of his powers shows that he could be an A-list hero whenever he wished. Instead he's staying close to his family and campaigning for animal welfare.

Jeff Lemire is on formidable form here, with one good idea after another. The first is a page one interview with real-life magazine The Believer, bringing new readers up to date with who Buddy is and acting as a gateway to the first scene. The last is creepy as hell and not something I'm going to spoil. Let's just say that Maxine is having growing pains. 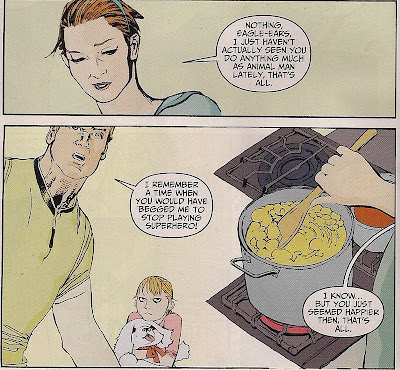 Foreman, inking himself and working with the masterful Dan Green, offers sharp artwork that doesn't match any superhero universe house style, but is a perfect fit for this script. His layouts are inventive yet unobtrusive, his handling of facial expressions exemplary, and the colours of Lovern Kindzierski give every sequence the proper mood.

(There's no excuse for Cliff still having that mullet 20 years on, mind.)

I don't know what the orders were like on this issue, but I can easily see it becoming one of the most downloaded of the New 52 as word gets out about just how good this debut is. The synergy between Lemire and Foreman very quickly clicks into place, with pages such as Buddy's reaching out to 'the life web' the kind of work that can make a career.

And that cover is just excellent, evoking the animal kingdom, internal organs and the world tree - I suspect a certain Swamp Thing will be showing up soon in a comic that, in a single issue, marks itself out as unmissable.
Animal Man #1 review Dan Green Lovern Kindzierski New 52 Travel Foreman