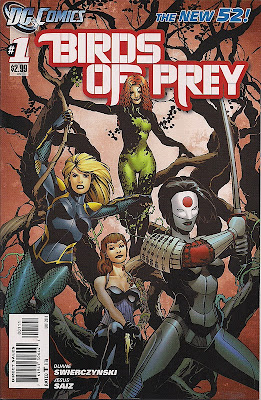 Who'd be a reporter in Gotham? Fed tips about a 'covert ops team run by a bunch of super-criminal hotties', you're expecting to get a good story, but before you can publish, someone tries to kill you. Then you're saved by said hotties, but they insist you leave town. Then ... ahh, but that would be telling.

The Birds of Prey number but two this issue, as Black Canary and Starling are still trying to put a team together. One potential recruit is the swordswoman Katana, recommended by Canary's friend Barbara Gordon, the reborn Batgirl. At least Canary, aka Dinah Lance, seems to consider her a pal; Barbara is decidedly frosty, unhappy that Dinah hasn't yet cleared up the small matter of being wanted by police. Could it be that Barbara used to run a team known as the Birds of Prey, and now that she's pursuing other avenues she doesn't want Dinah to sully it with a bad rep?

We're not told, but that's one interpretation of their meeting. I expect we'll find out in time. This issue is more concerned with introducing us to the new character, Starling. She talks tough, has tattoos, drives a vintage car, worries that she's damned to hell and isn't liked by Barbara ... that's not too shabby a collection of characteristics for a first issue. I don't know yet what's so unique about her that she gets to be Dinah's new best friend, but I'm intrigued enough to stick around and find out.

Dinah, most of us know already. And anyone who doesn't will see that she's a mistress of the martial arts, possessor of a sonic scream and a supremely confident fighter - easily enough to enjoy her struggle against the camouflaged gunmen out to kill Gotham hack Charlie. We don't learn yet who's been playing him, but that's another reason to come back after this debut ... the question of who'll make Canary and Starling's team is less of a grabber, for obvious reasons.

Duane Swierczynski's script reads well with only a couple of off-moments, one for each of our stars. First, there's Dinah carrying a knife. She doesn't use it on anyone, but I don't want my heroes carrying blades (yes, I realise Katana has a ruddy great sword - I've never liked her).

Then there's the line given to Starling - aka Ev Crawford - in a diner (click on image to enlarge):

Trying too hard, dear. Mind, if that line is a summation of Starling's attitude to life, we're not going to get on. Happily, she's more likeable in the action scenes, coming on like Lady Blackhawk with her yee-ha attitude to danger. I look forward to finding out what her special skills are, besides looking good.

Because she looks very good. I'm not keen on her fighting crime in a corset, but I love the Bobby Soxer femme fatale vibe artist Jesus Saiz conjures up. And his Dinah is a crime-fighting firecracker, with great moves and better hair. The rest of the book looks tremendous too, full of spot-on storytelling and marvellous money shots. And he pulls off a couple of excellent scene transitions required by the script. Saiz's biggest strength, though, is his skill in drawing faces that simply brim with emotion - keeping Saiz will go a long way to making this book a success.

Hanging on to his creative partners would help, too - Nei Ruffino has quickly become one of DC's top colourists, with sharp choices, well laid down - just look at how nicely she tones the camo killers. And Carlos M Mangual's letters are unobtrusive, but always attractive. I don't know if he's responsible for the new take on Canary's narrative boxes, but I laughed and laughed.

As DC's predominantly female team, the Birds of Prey have long had the eyes of fandom on them. While it's too early to say how well Swierczynski and Saiz will pull off the all-important character dynamics of the full team - cover co-stars Katana (ugh) and Poison Ivy should show up next month - they're off to a good start.
Birds of Prey #1 review Carlos M Mangual DC New 52 Duane Swierczynski Jesus Saiz Nei Ruffino