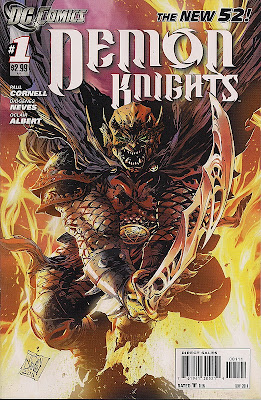 I've seen tons of riffs on the Fall of Camelot, I guess we all have. But Demon Knights begins with a fresh look at the moment that the dead Arthur is wafted away to Paradise, as one of the book's soon-to-be-stars breaks out of her assigned role with style, and maybe just a smattering of Spamalot.

It sets the tone for the book, a cracking yarn set in days of old, when knights were bold and dragons walked the land ... dragons, demons, wizards, enchantresses, exotic traders, mysterious horsewomen, shining knights, Amazing Amazons - this one, True Believer, hath it all.

Not forgetting an immortal caveman, whom I was half-expecting to show up in another DC New 52 book this week (he may still, I haven't read it yet).

Trying to summarise the plot of this one is setting myself up to fail. It's not so much difficult to follow, as very busy. Let's just say it takes place in England, in two time periods and features a cast of characters who actually do deserve that overused word, 'motley'. The star of the book is the Demon Etrigan, who's hooked up with Madame Xanadu in his other guise of Jason O' Th' Blood. They take a break in an inn in a hamlet besieged by agents of a well-known DC wizard and his comely consort, but the various travellers who also happen to be there aren't going to let their quiet pint be interrupted without a fight ...

Paul Cornell's script is a hoot, not so much a matter of comic japes as letting the humour in the everyday emerge. And when the everyday is more than a millennium ago, in the DCU, we're in for a treat. Just hearing Madame Xanadu witter on like a character from Carry on Camelot (was there ever a Carry on Camelot? Why ever not?) merits a broad smile, and it's great to see Jason Blood in the days before he became a wet blanket.

Among the new characters, Al Jabr the (assuming here) Moor trader and Exoristos the (and here) Amazon instantly intrigue, while the Horsewoman has a heck of an entrance. And while several of the other players in Demon Knights have links to previous DC continuities, knowing that is a bonus - this story stands on its own just fine.

Contrasting with the humour is a chilling scene showing that innocents aren't guaranteed a safe passage in this book. The sorcerer is a real stinker (though a comment from Mrs Sorcerer hints that he sees himself as anything but). Actually, there's another wizard around, Merlin, and while he's generally on the side of Good, his pragmatism makes him a spirit to be wary of.

The pencils of Diogenes Neves are suitably fantastic. Inked by Oclair Albert, his people are full of life; whether they're common brawlers, majestic warriors, mystics or monsters, they power across the pages. And, importantly, while they come from many lands and backgrounds, they complement one another visually. The finishing touch is added by Marcelo Maiolo, who contrasts earthy and dreamlike tones to fine effect, foregrounding the action while making things in the distance enticingly mysterious.

Lettering the book, Jared K Fletcher uses a variety of fonts to emphasis the otherworldiness of cast members, without ever getting too fussy; it's an intelligent piece of work.

Covering Demon Knights is a striking image from Tony Daniel and Tomeu Morey - it's a shame it's just Etrigan rather than the full team, but he's the best-known character in this issue, heck, his name's in the title. We'll see the rest of the gang soon.