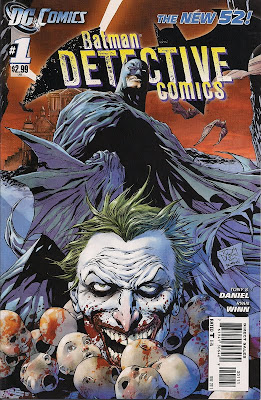 Wow. The last time I read a Batman story by Tony S Daniel I was underwhelmed. After Detective Comics #1, I'm thoroughly whelmed. I may just throw a parade.

But first, there's a review to be done.

This is the first solo outing of the present day Batman in the New DC Universe, but we're given a  familiar way in - Batman is on the trail of the Joker, bidding to stop his latest murderous rampage. There's a great little sortie between the two, then an even better, bigger one. Punctuating these are conversations with butler Alfred and Police Commissioner Gordon, and the book ends with a truly chilling scene.

Apart from a few corny bits of narration perhaps intended to pull in the Christian Bale fans ('I am the Night/Gotham/Batman'), Daniel's script is exemplary. Fights are well choreographed and complemented by nifty dialogue, while conversations reveal character, situation and advance the plot. He even addresses the nonsense of gun-toting, helicopter-riding cops chasing a hero who works closely with Gordon, five whole years after Justice League #1, with its similar scene. And a subway train vignette shows that Daniel has a real knack for the timed reveal.

What's more, Daniel's art - already impressive - seems to have gotten even better. It's still recognisably Daniel, with his powerful Batman, sharp sense of movement and lush cityscapes, but he looks to have taken on board some Frank Miller influences. The mix works marvellously, making individual pages the proverbial visual feast, and the whole thing a satisfying first instalment in Batman's latest era.

A delightful - in  a grisly way - surprise, I'm chalking this up as one of the New DC's biggest successes.