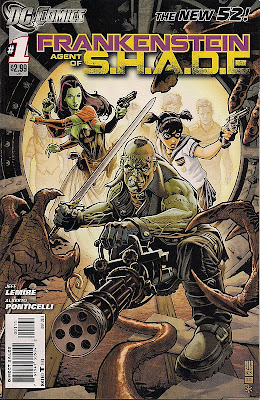 Monsters have taken over a small town. Frankenstein, Agent of super-spy organisation SHADE, is sent in to find any survivors and put down the beasts, along with his new team, the Creature Commandos.

Now this is a fabulous book from DC's New 52 initiative. The hero is a broken-hearted monster who quotes poetry. His wife is Modesty Blaise with green skin and four arms. His tough-talking boss has decided he'd quite like to be a titchy schoolgirl. His back-up team comprises a werewolf, a vampire, a creature from a lagoon of indeterminate colour and a medically minded mummy. His science advisor is Ray Palmer, master of shrinking technology.

There's the mystery of why the monsters' first human victim isn't surprised to see them. The moral dilemma of creating servants that live less than a day. A chamber of secrets.

Jeff Lemire's script rattles along at a fair old whack, spitting out mad science and weird plot points by the page. He economically sketches his characters, lacing them with the promise of depths to be discovered in due course. There's a secret HQ linked to his Atom strip in Adventure Comics, and slightly tweaked versions of characters from his recent Flashpoint Frankenstein and the Creatures of the Unknown mini, but everything feels fresh, and right.

Lemire gives Alberto Ponticelli the strangest things to draw - massive monsters, floating cities, tragic 'humanids' - and he comes up trumps every time. Frank, with his neck bolts and mini Mohawk, looks ludicrous, but magnificent; Father Time a la St Trinian's is hilarious; the beast horde is horrifying. This book contains one of the best battle spreads of the year, a joyously packed scene of mayhem. There's a rough quality to the finishes that suits the story, while the vibrant colours of Jose Villarrubia and varied letters of Patrick Brosseau only add to the wonderful look of this book. JG Jones and Hi-Fi top the issue off with a movie poster-style cover illustration that's just a little cheeky.

There's a minor link to Batman continuity, but that apart, this comic plays well in its own corner of the New 52 Universe. It's one I hope to visit monthly for a long time.
Alberto Ponticelli Frankenstein: Agent of SHADE #1 review Jeff Lemire Jose Villarrubia trick Brosseau